The Punjabi in Yap Ah Loy’s temple in KL

Meet Ranjit Kaur, the Punjabi who speaks fluent Cantonese and works in the Sin Sze Si Ya temple in Kuala Lumpur. — Pix by Choo Choy May
Follow us on Instagram, subscribe to our Telegram channel and browser alerts for the latest news you need to know.
By By Ida Lim

The temple is set back from the busy Jalan Tun H.S. Lee and most people driving past hardly give it a second look. Its other more prominent entrance is tucked away in the quiet alley of Jalan Lebuh Pudu, right next to tourist magnets Central Market and Kasturi Walk, but not many people know it is there.

Ranjit, who was born in 1962 but is 56 years old according to the Chinese way of reckoning, speaks fluent Cantonese and even peppers her conversations in English with words from the Chinese dialect.

She herself does not feel that her presence in the Taoist temple as a caretaker assistant is anything out of the ordinary, saying: "I don't feel anything, I'm ok, normal, nothing lah because you are so used to it."

"Yes, a lot of them are very surprised, a Mangali girl here," she told Malay Mail Online, using an old local Cantonese colloquialism for Punjabis.

"But many of them who know my father, my mother, they know, they know us lah," she said of her family's generations-long links to the temple.

To understand how a Punjabi woman ended up in a temple with distinct ties to Kuala Lumpur's Kapitan Cina Yap Ah Loy, you have to go back to her late parents who were second-generation settlers in Malaysia - Sajan Singh and Gurdeep Kaur. A group photo taken in 1948, that shows Ranjit's late father Sajan Singh, hangs on a wall within the Sin Sze Si Ya temple's main hall.

According to what she was told, her father Sajan used to be a watchman for a local Chinese family who then recommended him to this temple -- a job he was to take on for decades.

The sixth child to be born to the family of six girls and four boys, Ranjit and her siblings stayed at and grew up on the temple's grounds, where the Chinese temple caretakers also stayed.

Ranjit was born when the parents of the current temple custodian Wong Ai - now aged 79 - were still managing the Sin Sze Si Ya temple. The task of caring for the temple has been with Wong's family for about 60 years.

"Of course I used to be what the Chinese say - very pat poh (busybody), come and listen to stories, come inside here, talk to them, chit chat.” Wong’s father even used to share his lunch with them so they “were brought up in a very nice [luxurious] way.”

And of course that was how Ranjit picked up Cantonese and develop a strong sense of belonging.

"I cannot miss this place, even I can go on holiday I still will think of this place, even one day off also I don't feel like taking off because I find this is like my own house," she said. One of the two gates - along Jalan Lebuh Pudu - of the Sin Sze Si Ya temple that became a refuge for Ranjit's family during the May 13, 1969 riots.

Growing up in the heart of Kuala Lumpur, Ranjit remembers May 13, 1969. At the age of seven, she was used to taking the bus from Pudu to Chan Sow Lin.

On that day, Ranjit remembers taking the packed dinner prepared by her mother at around 5pm to 6pm to her father who was holding down two jobs - temple watchman in the daytime and night watchman at European firm Hargill's in the Sungai Besi area.

"May 13, I was in Pudu already, I take the bus, Chan Sow Lin bus, I go to Chan Sow Lin there and go and give my father makan (food), then I got caught there.

"I was stuck because the lady told me 'why are you going back Pudu, you cannot, people fighting there, you cannot go back', so I stayed back with my father," she said.

Coming back to the temple in the daytime a week later in a police van, Ranjit said a police officer of her same race stopped them from getting shot by those who did not know where they were returning from.

As for her mother and other siblings, Ranjit said they were safe behind the locked gates of the temple and well taken care of by the Chinese caretakers of the temple who shared their food as neighbours. 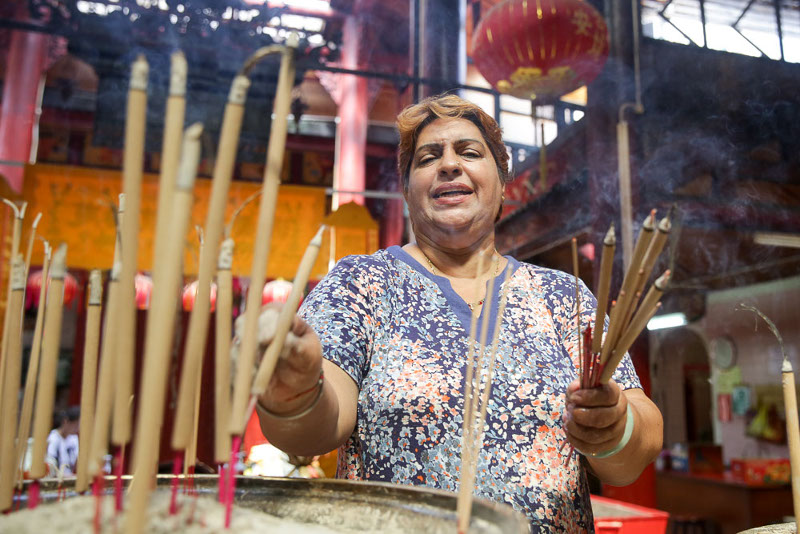 After completing her secondary school studies, Ranjit worked as a nurse in Kuala Lumpur and her mother's hometown of Seremban, marrying in 1990 and giving birth to her daughter seven years later, before returning to the temple in 2006 to work under Wong's family and assist in caretaking activities.

Ranjit's duties range from helping the temple caretakers prepare the temple typically at 6.30am before the doors are opened to the public at 7am, or even earlier if there is an important event, to clearing old joss sticks and making sure all is in order and cleaned up.

Ranjit is an able guide for those unfamiliar with the numerous deities in the temple dedicated to different aspects of life, such as the Wen Chang deity for those wanting their children to do well in their studies, and deities for good careers and a prosperous business to striking it big in a lottery.

She shares little tidbits of information like how prostitutes had in the old days sought out the Hua Fen Fu Ren (Deity of Beauty) but wives now approach this deity if their husbands flirt around with other women.

Others will bring cosmetics to pray for beauty, while young girls may also come here to pray for the clearing of marks on their skin after using unsuitable facial products, she said.

She also shares anecdotes about how women struggling to conceive for years become pregnant after doing a symbolic ritual before the fertility goddess Guan Yin to "change stomachs", which involves the recital of prayers and the flipping over of pigs’ stomachs. 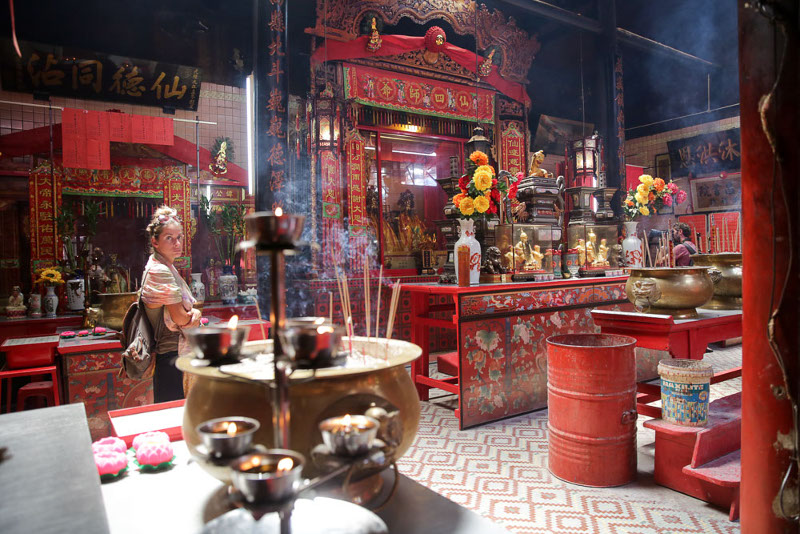 The main hall of the Sin Sze Si Ya temple that has three halls – where some of the many deities are placed.

She is on hand to to guide temple visitors on how to pray and carry out certain rituals, including when one needs a change of fortune or wants to be protected against bad luck in the coming year.

Ranjit herself also believes in the Chinese deities and joins in rituals such as the one this year to ensure good fortune when she hit her Chinese age of 56.

"I serve my god, and I serve this Chinese god also because I'm brought up here, if I don't serve this one, I tell people to pray, what for?" she said. 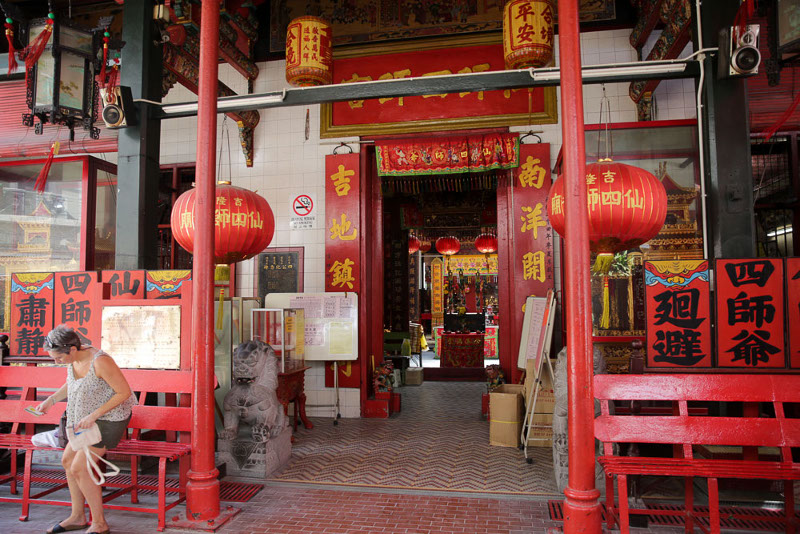 The actual entrance to the Sin Sze Si Ya temple that Kapitan Yap Ah Loy founded in 1864 and dedicated to the Sin Sze Ya and Si Sze Ya patron deities.

Life for Ranjit here at the Sin Sze Si Ya temple is one of simple happiness where everyone -- including several Punjabi men from India -- works together as a family, where she calls Wong "Ma" and refers to Wong's husband as "Bapu" or "Father" like how their children do.

"I'm very happy working here… together as a family we work, we don't have any problem, any misunderstanding.

"Happy memory? We all get together, that's it, we work together as a family, we come here, we talk, pass our time… they are very nice people, compared with other places you have so many problems, (here) no problem," the affable and easy going Ranjit said.

Enjoying her work at the temple, she plans to continue working here until she has to retire and cannot go on working.

Her younger brother Daljit Singh, 51, has continued on in the footsteps of her father, who only stopped working as a temple watchman when he passed away in his 60s on July 29, 1987.

"Immediately after my father passed away, he took over. Before he passed away, my father had already gone to see the (temple committee) chairman, he said that if anything happens to me, I'm sick now, you all please take [my son], so they took him until now," she said of the ninth child in the family. 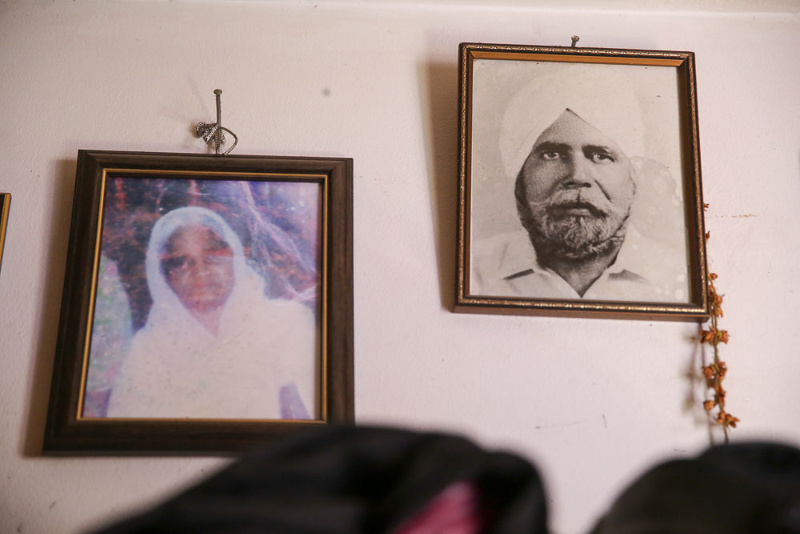 The photos of Ranjit and Daljit's late parents Gurdeep Kaur and Sajan Singh, who both passed away in their 60s in 1987 and 2009 respectively.

Ranjit and Daljit will likely be the last of their family to work at the temple, with their other siblings not interested and her only daughter now studying in a college. Wong's children are also working in the temple.

This story is of a Punjabi family working in a Chinese temple… nothing manufactured, just uniquely Malaysian.