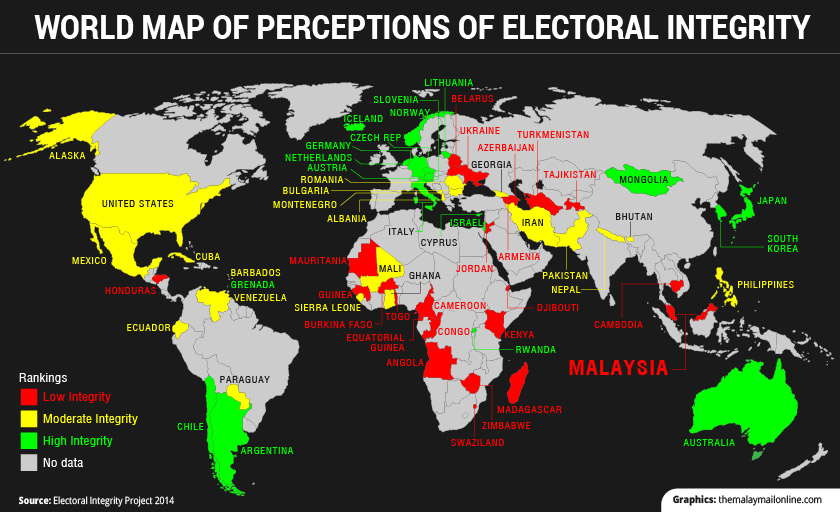 KUALA LUMPUR, Feb 28 — A study on the integrity of elections across the globe has rated Malaysia near the bottom of the pile, with the country’s general election last year coming in 66th out of 73 elections surveyed, just above Zimbabwe.

The findings of the Electoral Integrity Project (EIP), based at the University of Sydney and Harvard University, released this month shows that Malaysia’s 13th general election was perceived as having low levels of integrity, due to problematic electoral boundaries and election laws.

Cambodia ranked below Malaysia at 69th, while the only other Southeast Asian country on the list, the Philippines, ranked 47th, signalling moderate levels of electoral integrity.

In the EIP’s 100-point Perception of Electoral Integrity (PEI) index, where a higher score denotes a more positive evaluation, Malaysia scored just 48.4 points, compared to Norway which ranked the highest at 86.4 points, indicating a high level of electoral integrity.

“Worldwide, electoral integrity is at risk in Southeast Asia,” the EIP report said.

“Recent electoral protests and instability in Thailand, Cambodia, and Malaysia vividly illustrate these challenges,” it added.

The EIP, which covered 73 elections held between July 1, 2012 and December 31, 2013 in 66 countries worldwide, said that Barisan Nasional’s (BN) victory in the May 5 election was attributed to gerrymandering, which is the malapportionment of electoral boundaries.

“The ruling BN coalition have a distinct advantage in constituency size in their mainly rural, Malay base while the urban strongholds and ethnic Chinese populations supporting opposition parties have districts with much larger electorates,” said the report, pointing out that the Putrajaya federal constituency has just 15,791 eligible voters, compared to the Kapar constituency with 144,159 eligible voters.

The EIP also noted that the Pakatan Rakyat (PR) opposition pact bagged just 89 federal seats, or 40 per cent, of the 222-seat Dewan Rakyat, despite winning 50.87 per cent of the popular vote in the election that is based on the first-past-the-post system.

“The election also saw 80 per cent turnout, the largest in the nation’s history. The outcome deepened the challenge to the legitimacy of the government,” said the report.

Shortly after the May 5 election, thousands rallied in protest against what they said were tainted polls. One key complaint was that the indelible ink used to prevent voters from casting votes repeatedly, washed off too easily.

The EIP observed that BN enjoys greater access to the media. PR, however, lacks access to the government-controlled radio and television, while many newspapers have close ties to the ruling coalition, though the opposition pact has space in online media.

“Access to political finance is also imbalanced,” the report said.

Malaysia scored 53 points on ‘results’ which refers to whether the election results were challenged or if the election had sparked protests. The country scored 58 points on party and candidate registration, which considers whether women and ethnic minorities had equal opportunities to run for office, or if some candidates were barred from holding campaign rallies.

The study noted that contrary to popular belief that the main election issues arise on polling day, such as ballot stuffing and inaccurate counts, experts were mostly concerned about the lack of a level playing field in campaign media and political finance.

“Overall, not surprisingly, the results confirm that electoral integrity is strengthened by democracy and development,” said the report, noting that Norway, Germany and the Netherlands have strengthened democratic practices and electoral management bodies over the years.

The United States (US) scored the worst among Western countries, coming in at 26th, as experts expressed concern over redistricting processes, campaign finance and voter registration.

The PEI survey identified around 40 election experts for each country, where there was roughly an equal balance between international and domestic experts. A total of 855 experts gave completed responses, representing 30 per cent of those contacted.

In Malaysia, 17 experts had responded.

The project defined electoral integrity as agreed international conventions and global norms that apply universally to all countries worldwide through the election cycle, including during the pre-election period, the campaign, on polling day, and its aftermath.

The EIP is an independent research project based at the University of Sydney and Harvard University, directed by Professor Pippa Norris, and co-authored by Dr Richard Frank and Dr Ferran Martinez i Coma.