Three pointers on how to be safer behind the wheels

Monday, 20 Dec 2021 11:17 AM MYT By Alwyn Lau
Follow us on Instagram, subscribe to our Telegram channel and browser alerts for the latest news you need to know.
By Alwyn Lau

DECEMBER 20 — About two months ago, I was involved in an accident along the Kerinchi link.

I was doing about 70-80 kilometres per hour at the start of the link near Bangsar South, going up the ramp.

It was around 5pm, there was a heavy drizzle. When I arrived at the second turn (which is a sharp left), I lost control of my steering wheel, causing the car to spin like one of those rides in Legoland.

That was probably the longest three seconds of my life as I went round and round, just waiting for my car to collide with another car.

Lo and behold, after about a 450-degree spin my vehicle rammed into the wall, wrecking my front left wheel in the process (not to mention any sense I previously had of being able to control all aspects of my reality).

How there weren’t any cars near me (especially on such a busy section of the highway) at the time my car spun, God only knows. How I managed to drive to the mechanic opposite my apartment despite my left tire rim looking like Doctor Octopus tore it apart, I’m also clueless.

All I know is I recovered from the shock, sent the car to be repaired and endured about a week and a half of carless-ness.

In light of that experience, plus the non-stop rains recently and tragic accidents like the one along the Elite Expressway last Friday (which took 10 lives), I wish to offer a layman driver’s (as opposed to the numerous professional F1 drivers I see on the Federal highway every day) three reminders to all Malaysians, especially during this rainy season:

One may imagine this was an absolute no-brainer, but no.

You still see many drivers speeding along the SPRINT highway during a downpour as if they’re Vin Diesel chasing a bad guy who just stole the nuke codes.

I have a strange suspicion that most of these folks have never been involved in a bad accident and are thus still under the illusion that they can never ever lose control of their car no matter the circumstances.

I don’t mean to discriminate against people driving "cooler" vehicles (and maybe my observational sampling isn’t that representative) but most, though not all, of the cars I see doing this are generally big higher-end types. 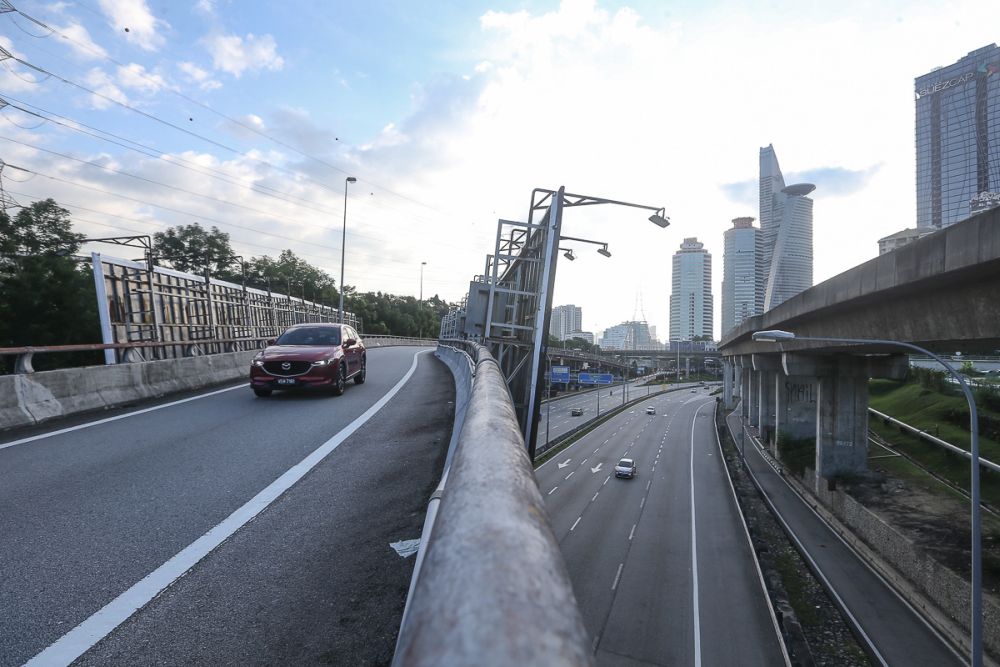 A general view of traffic on the Federal Highway in Kuala Lumpur June 1, 2021. — Picture by Yusof Mat Isa

Sure, maybe the technology of such cars can help them do better against the oil on the road but — like someone putting 100 per cent of his investments into a single stock — you only need one major slip-up and everything is over.

It would be ironic if these drivers were steadfast seat-belt wearers, wouldn’t it? Like a chain-smoker trying to cut down on salty food.

The tragedy about last week’s accident is that, like all multi-vehicle crashes involving multiple victims, you only need one mistake by one driver. In a very real sense, the life of other drivers and their passengers are in your hands and vice-versa.

Critically, this issue isn’t so much about not being a speed demon; it’s also about making the effort to slow down when arriving at tight corners on slippery roads. I suspect that was a key reason why my car spun.

Due to the rains and the fact that most of Malaysia is in Phase 4, traffic jams are going to be standard fare. And what’s that most annoying thing many of us do in a traffic jam? Play I’m-Not-Going-To-Let-You-Cut-In.

It happens about a million times a second in urban KL road crawls. I’m in my lane just chillin’, then I see another car signalling its intention to move in front of me and what do I do?

I suddenly decide it is my life’s purpose to prevent that car from doing so, thereby commencing a battle of car bumpers, the non-Hollywood lateral version of chicken.

Then the egos rage and the horns blare. Until the victor car gets his/her way and the obligatory 10 seconds of supreme life-satisfaction.

Needless to say, when two cars do battle like this — instead of one car just letting the other go first — it compounds the bottleneck. This is the worst version of automobile game theory possible.

Now multiply this throughout the city, and throw in rains which don’t stop for hours, and you wonder why so many roads resemble open parking lots.

Folks, can we just drop the ego and drive like civilised adults?

Finally, please get your car checked regularly. Black oil, tyres (their pressure, their "hairs", etc), water, temperature, brake fluid, and all that messy stuff we’d prefer to put off until something bad happens.

I won’t say anything more about this; I only hope this article serves as a reminder to anyone with the habit of believing their cars can maintain themselves.

Even though I service my car often, I admit I should have changed my tyres before October. If I had done so, I suspect the chances of my SPRINT incident would’ve been lower.

Stay safe and drive safe, everyone.