Thursday, 29 Jul 2021 9:52 AM MYT By Praba Ganesan
Follow us on Instagram, subscribe to our Telegram channel and browser alerts for the latest news you need to know.
By Praba Ganesan

The sad — but less dramatic — a sparse crowd below 500 at Dataran Merdeka.

Or the other, a mass crowd fills up the padang, an energy of rebellion in the air. Social distancing an early victim. Alarm builds as numbers swell followed by a standoff with security forces.

The present odds side the former, lukewarm.

The rights of man

To be absolutely clear, this column supports the right to protest. It requires a remarkable, quite remarkable set of conditions if a condemnation ensues from here after a protest — and most impossible, before one.

Protest. It is sacrosanct. Indeed, nothing visualises democracy better than protest pictures.

So here we jump up and down when citizens feel they want to come together and stand up for their beliefs. It is a ferocious cathartic experience. 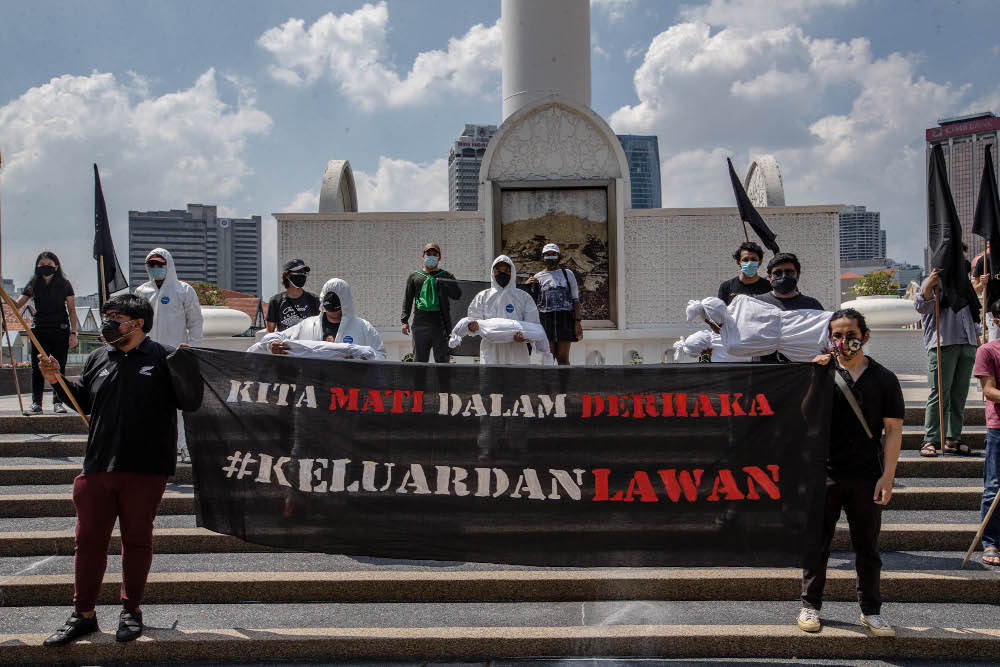 #Lawan means fight, which probably appears incendiary to many.

The hashtag had 6,000 mentions yesterday, while as a Google search was not as strong — Olympics badminton dominates.

The key objectives: to remove the prime minister, parliamentary sittings and a six-month moratorium, ostensibly referring to bank and education loans.

There is no shortage of people asking for the prime minister to step down but the likelihood of naysayers showing up to express this overly abused sentiment beyond WhatsApp seems remote.

What remains unexplained is if Muhyiddin Yassin bows down, who replaces him?

Few are convinced the PM’s majority is stable but fewer feel another parliamentarian — any from all the usual suspects — exceeds his count.

Therefore, a general election in a time of Covid-19 if Muhyiddin exits.

Which is no deal-breaker but if the demanders want to separate themselves from those they denounce, then they must display an honesty about the snap election their core ask brings.

They have to lead on this, rather than remain silent about it.

The second has not won new friends after the Dewan Rakyat shenanigans this week. In the three days of the first 2021 sitting after not having one for more than a year witnessed poor shows.

However, parliamentary proceedings protect Malaysians and the answer to the recent shortcomings would be more sittings, not fewer, together with increased roles for select committees.

But that is not what regular Malaysians take home.

The demands are clear but they demand co-operation from the reconstituted Opposition.

#Langkah champions these and in return the Oppositionoffers better candidates and utilises the Parliament these young fight for on their behalf.

But will the out of sorts Opposition do that?

As it stands, Opposition MPs have not gone out of their way to support #Lawan and there are two days to the rally. They might want to shout out more now, to extend reciprocity.

But if it’s time

However, a surgical view of demands and practicalities — akin to pouring cold water on #Lawan — forgets a more critical factor. One which can cut out logic at its knees.

Malaysians comprehend Covid-19 and a misjudging government are responsible to varying degrees, but they are angry nevertheless. Their angst level might be the most telling factor.

Many, especially the young, may use #Lawan to state their objection to the reality forced upon them. It won’t be the PM, parliament or the student loan they never intended to pay. It will be that they are pissed and this rally is the vehicle. The organic confluence of the people’s will.

Protest in a time of lockdown

But prepare for a strange one. This will be the first — major? — rally in the Covid-19 era and during a strange lockdown of the capital.

Only those in the Klang Valley can participate. Those in Selangor have to worry about ongoing and additional roadblocks to stop interstate travel.

Public transportation will be available.

Early arrivals have no restaurants or meeting places prior to the rally. It is fortunate — maybe not as coincidental — the no dine-in and other rules are in place to drastically reduce meeting points.

Where to be still?

Cliché time. The restrictions are real but if they manage to gather and gather enough in numbers, with the frustrations experienced at all levels of Malaysian life, it can light up.

The schedule says July 31, but it does not have to subside on the same day. It can be what kicks off other events. That’s what was left out conveniently at the start, momentum. Done right, millions can keep track on social media. And can attend the next one. Eye on the big mo.