People pay their last respects to Datuk Wong Sai Wan during his wake service at the Xiao En centre in Kuala Lumpur May 15, 2021. — Picture by Ahmad Zamzahuri
Follow us on Instagram, subscribe to our Telegram channel and browser alerts for the latest news you need to know.
By IDA LIM

KUALA LUMPUR, May 15 — Friends and colleagues, both present and past, paid their last respects today to Malay Mail editor-in-chief Datuk Wong Sai Wan, a veteran journalist whom they remembered fondly.

Malay Mail publisher Datuk Siew Ka Wei, who has known Wong for almost two decades, said he considered him to be like a brother. Siew said he had known Wong for years before the latter joined Malay Mail.

“He was the best of the best. I tried to get him to join me for many years, in the end I got him,” he said.

Siew described Wong as “Iron Man” and a “superstar”, in a nod to Wong’s fondness for the Marvel Comics superhero character Iron Man which is displayed prominently in Wong’s office.

He added that Wong was a “very friendly” man who “helped everybody” who asked for his help. 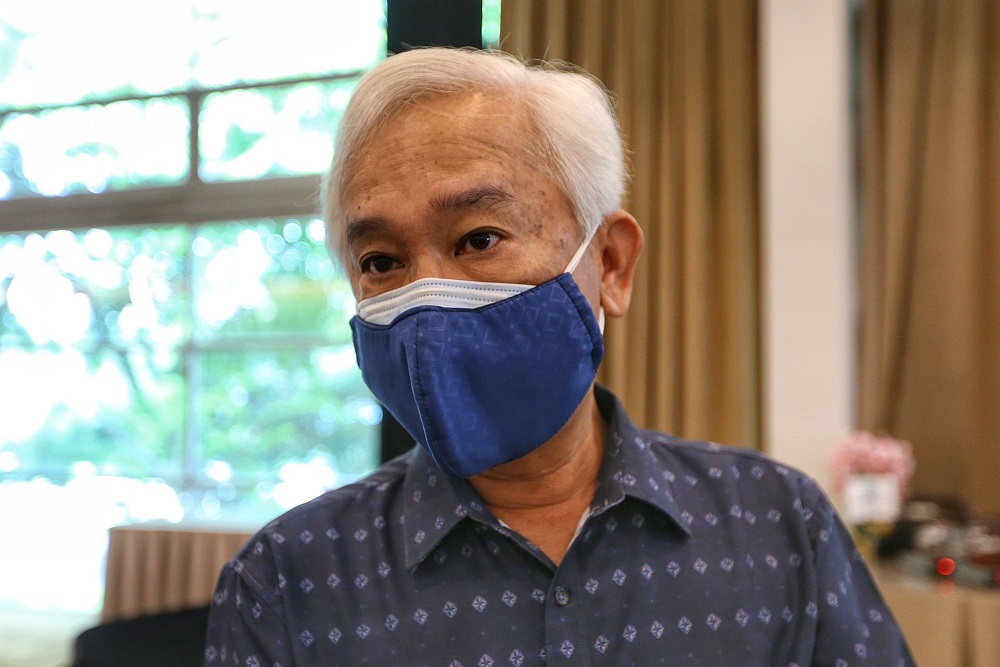 The Edge publisher Datuk Ho Kay Tat said he had known Wong for 36 years circa 1985, when Ho was then with Malay Mail and Wong was then with The Star.

Ho said he had, as The Star’s CEO from 2011 to 2012, worked together with Wong when the latter was the executive editor of The Star.

“I think like everyone else, I was really shocked when I heard the news yesterday morning, because I thought he was recovering very well from a stroke in November.

“And so I was absolutely really shocked. It’s a major loss I think to the family, friends and the industry because he was a true blue journalist,” he told Malay Mail when met at the wake. 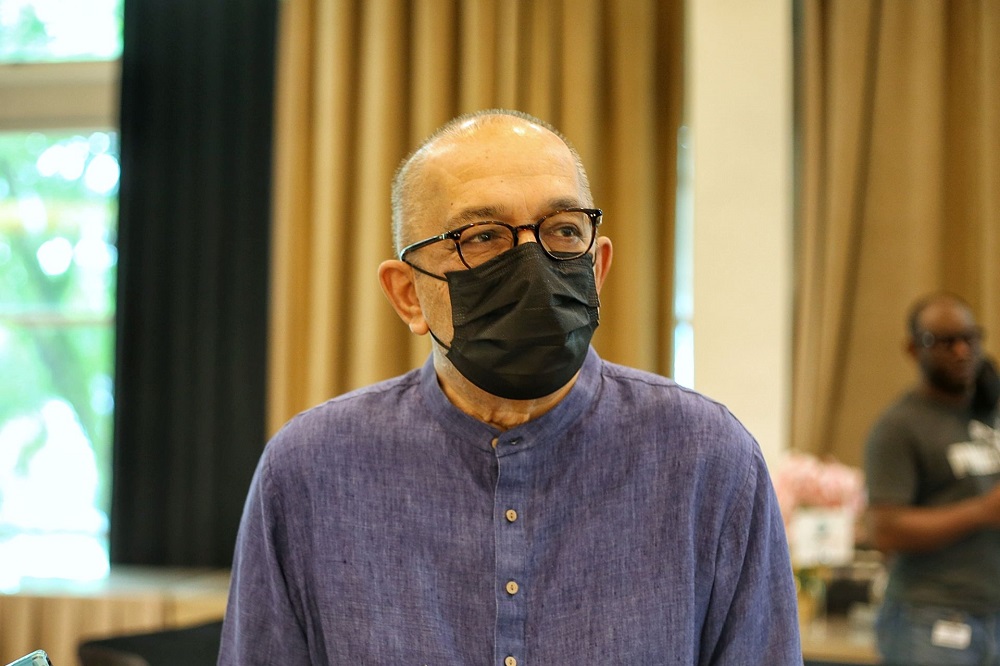 ECM Libra Group Berhad chairman Datuk Kalimullah Masheerul Hassan, who was with The Star from 1979 to around 1985 or 1986, described Wong as a “good friend”.

“He started work as my trainee in 1985 in The Star. I was the chief reporter.

“All I can say is that he was a friend. He was a good friend. I used to visit him when he was in Seremban as (The Star’s Seremban) bureau chief; he loved to eat.

“But we used to see each other, used to visit him in Seremban, used to meet up in KL for a drink. I haven’t seen him in some time but we spoke on the phone,” he said. 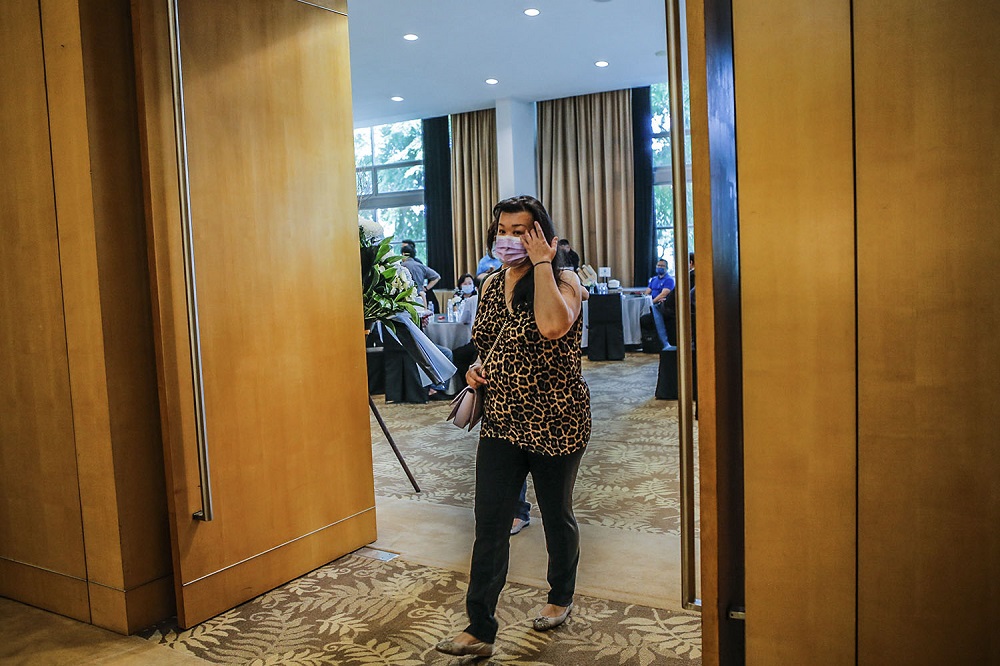 The Star’s chief content officer, Esther Ng, arrives to pay her last respects to Datuk Wong Sai Wan during his wake service at the Xiao En centre in Kuala Lumpur May 15, 2021. ― Picture by Hari Anggara

The Star’s chief content officer Esther Ng said she had known Wong for 29 years since she joined the paper in 1992, when he was the paper’s Seremban bureau chief.

As they were in the news desk in The Star then, Ng worked directly with him when he returned from working in Hong Kong.

“I worked pretty closely with him. He was actually a taskmaster, but at the end of the day, he was a very loving person as well, so we learnt a lot from him. 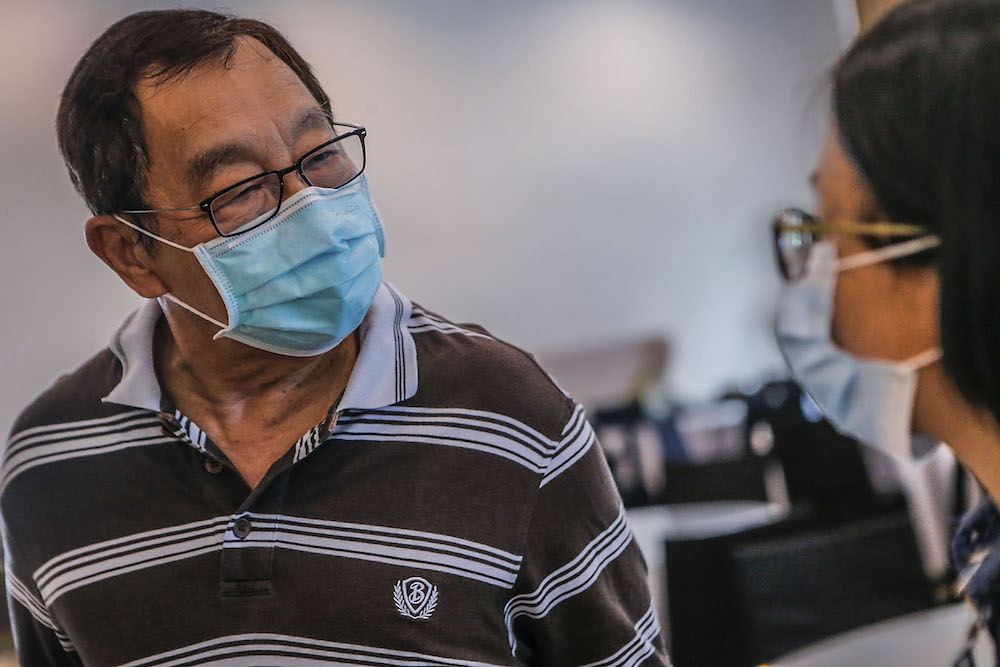 Former human resources minister Tan Sri Fong Chan Onn, who had served as chairman of The Star’s board in 2011, recalled Wong as a “very diligent, very hardworking” executive editor at that time.

“I was chairman of board of The Star and he was executive editor, he worked very hard, we got along quite well, I’m very sorry to hear of this,” he said.

During the 2013 general elections when Fong was no longer The Star chairman, he had as MCA vice-president regularly met with Wong where the latter provided updates on the political situation.

“We would have regular meetings at night, and he would brief me what’s going on, and it turned out his briefing is always more accurate than what I hear from others — telling me how MCA is doing there, how Umno is doing there.

“His sources of information are always very varied and more accurate, I would say from then on, I appreciated his connections and his ability to decipher information from the informants and look at the body language and decipher the extent of truth, extent of reliability,” he said, adding that they kept in regular contact through Whatsapp when Wong joined Malay Mail. 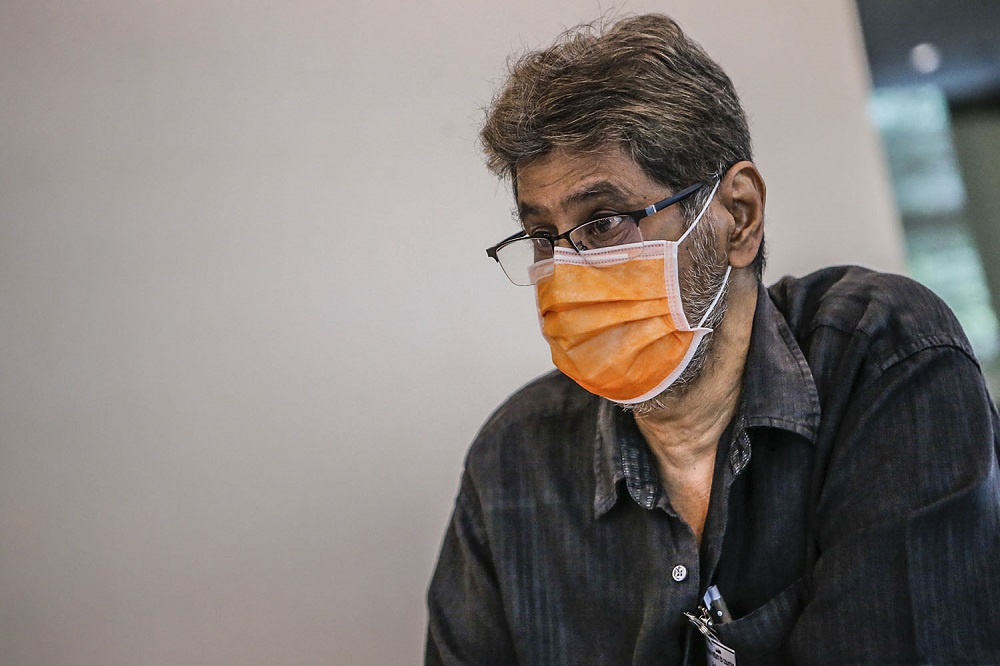 FMT managing editor Dorairaj Nadason speak to reporters after paying his last respects to Datuk Wong Sai Wan during his wake service at the Xiao En centre in Kuala Lumpur May 15, 2021. ― Picture by Hari Anggara

Dorairaj Nadason, now the managing editor of FreeMalaysiaToday, said he has known Wong since 1988 when the latter was in the The Star’s Seremban bureau and while he himself was stationed in the Klang Valley. The two later worked closely together in The Star when Dorairaj was editor in charge of the newspaper’s production and Wong the editor in charge of content.

“We go back a long way, he’s one of those guys who’s always happy, always with a simple, you’ll never know the world is crashing down ... He’ll be there smiling, he’s a steadying kind of force,” he told Malay Mail when met at the wake.

He spoke of how Wong’s presence would help change situations where things are going wrong, noting: “But once Sai Wan comes in, everything is steady because he can steady the ship, the ship will be rocking all over the place, we will be struggling. Sai Wan walks in, all of us know Sai Wan is here, no problem. Sai Wan is here, we can now get things done properly,”

“He was a good friend, a good man, a good leader as far as the news desk is concerned,” said Dorairaj, who later served as deputy executive editor in The Star when Wong was still the executive editor. He later succeeded Wong as executive editor when the latter left in 2013 to join Malay Mail.

“He’s a man who has touched many hearts...  He’s a friend, the kind of friend you want to have. In life, you want to have friends like these, friends who will do things for you,” he said, noting how they had continued to keep in touch subsequently. 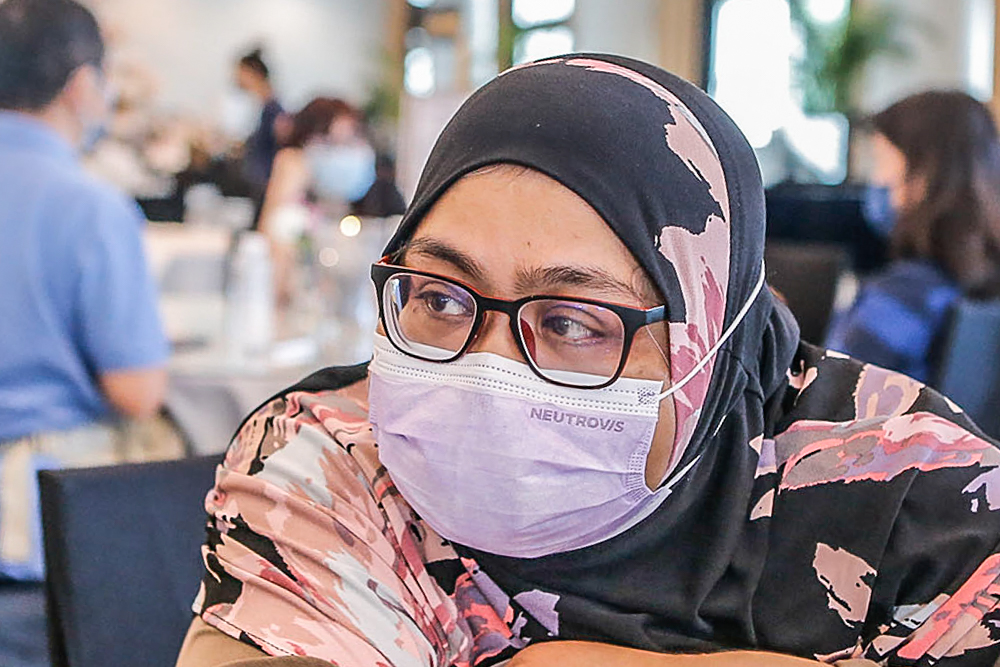 FGV Holdings Berhad group strategic communications senior manager Dalilah Ibrahim said she joined The Star as a cadet reporter in 1996 and worked there for 12 years, where she was trained by and reported to Wong who was the editor there.

“To me, although he is the editor, you don’t feel the [hierarchy] with him, he always treats people the same, whether it’s his friends, editor level or reporter level,” she said when met at the wake.

Even in stressful moments, Dalilah said Wong was not the type to show anger or snap at a reporter, noting: “I remember him as a very cheerful person, you don’t really see the stress is in him, it’s very stressful, but you don’t feel the stress with him. Sai Wan to me is a jolly good fellow, he’s jolly and he’s like no matter how stressful things get, he can still manage things well... He won’t be angry, he won’t get angry towards you, he is strict but he won’t show the anger to you.”

She described Wong as having a very strong news sense where he would quickly know upon being briefed by a reporter whether a story is worth reporting or would be suited for the newspaper’s frontpage or lead story for a page.

She said she had always grown in terms of her skills and learnt from Wong when he was the editor: “You can feel yourself growing, learning new things, analysing in a different way, so he shapes reporters into a journalist. I only remember good things about him even during the stressful times.”

They continued to keep in touch through social media and still met once in a while, with their last meeting being in 2019 where former The Star employees had a mini reunion over banana leaf rice. 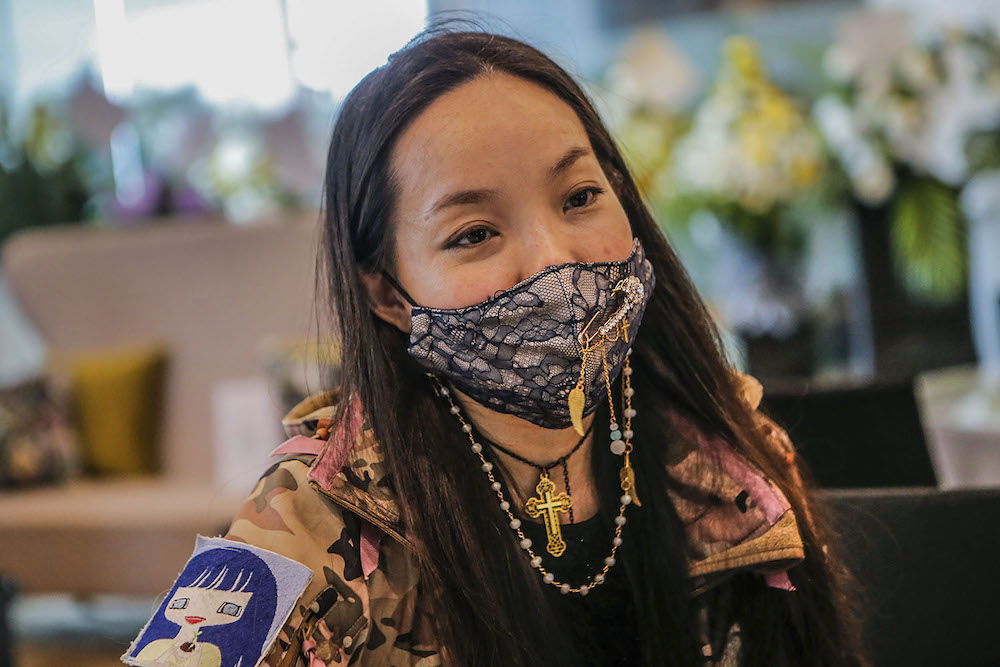 Poesy Liang, a contemporary artist focusing on social impact, said she was first introduced to Wong who was an editor in June 2012 --- a difficult year where she was in the hospital and where he would visit or send food.

Wong, who was still with The Star then, immediately featured her in his weekly column --- in July 2012 which was her birthday month --- upon her request. That was the start of their friendship. Since then, he had continued to ensure that she received some news coverage every year even after he joined Malay Mail.

“He’s also my art collector, Sai Wan. Because when I met him, I was a very poor artist, I wasn’t just starting out, but you know most artists are struggling for many years.

“Those were really my toughest years and he made it a point to buy my artwork, that time my artwork was very affordable too. So he bought all the cats, I think he owns about 12 pieces of my work,” she said, later showing a photograph of all 12 artwork displayed in Wong’s office.

“That time really no sales, that time I was really, really in trouble... I’m grateful for having his help then, definitely made a difference,” she said.

Unlike other editors whom she knows, Liang said she does not consider Wong as an editor, but more like a heng dai or “brother”.

“He’s been very generous, he’s a happy, good friend,” she said, crediting him for introducing her to editors of Singapore publications after a Causeway Cup golf competition between Malaysian and Singaporen media editors.

Describing Wong’s passing as “premature”, Liang said she last met Wong during a birthday celebration in 2019 for Malay Mail publisher Siew, who is also a collector of her art.

“Now he’s gone, who do we go to, who’s the go-to-guy now?” she said, referring to Wong being a source of advice and information, while also noting that many others have also been helped by Wong.

PKR’s Selayang MP William Leong said he met Wong at Malay Mail as part of his visits as an MP, and they stayed in frequent contact subsequently through WhatsApp messages.

“I think we will miss his very incisive view of things, he’s always been very witty and very quick with his comments, very sharp with his appraisal of the situation. I think the country has lost a good man,” he told Malay Mail when met.

Among those seen at the wake were Malay Mail’s deputy editor-in-chief Joseph Raj and Malay Mail’s Managing Editor Leslie Lau, as well as other Malay Mail staff.

Wong, who was born in Negri Sembilan, passed away yesterday morning at the age of 59 from a heart attack.

Wong was a 40-year veteran of the news industry, starting off as a reporter with local newspaper The Star and taking on various roles before eventually being appointed as Malay Mail’s editor-in-chief in 2014. 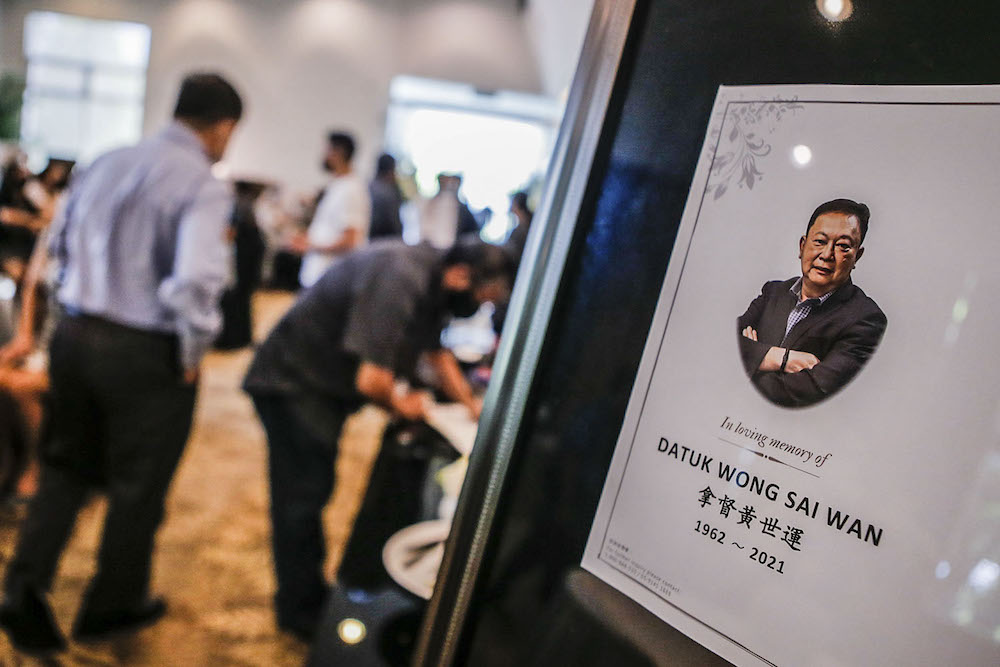 People pay their last respects to Datuk Wong Sai Wan during his wake service at the Xiao En centre in Kuala Lumpur May 15, 2021. — Picture by Hari Anggara

A wake for Wong is currently being held from 11am to 6pm today and tomorrow at Xiao En Centre on 1 Jalan Kuari in Cheras, Kuala Lumpur.

Due to current standard operating procedures (SOP) under the movement control order (MCO), only 50 people will be allowed at one time, with a waiting area if those present exceed the permitted number.

A funeral service is set for 10am on May 17, with a restriction of 15 people.

Tributes have poured in for Wong, including from his fellow peers who worked in the media industry, alumni from his secondary school in Seremban.