Cut off from supplying, Cameron farmers donate vegetables to poor, elderly in Ipoh

Tonnes of freshly-harvested vegetables were being discarded by growers at Cameron Highlands as they could not be transported to other locations due to the MCO. — Picture courtesy of Jason Kong
Follow us on Instagram, subscribe to our Telegram channel and browser alerts for the latest news you need to know.
By JOHN BUNYAN

KUALA LUMPUR, March 26 — Farmers in Cameron Highlands are donating vegetables to poor and elderly here, which they would have otherwise had to dump due to difficulties in supplying other states during the movement control order (MCO).

Prayer supplies trader Jason Kong, 39, and his friends are leading the initiative to salvage the food items and channelling these to the needy.

Kong said that the vegetables are available for collection in the mornings at Pasar Kampung Simee here and at Perniagaan Weng Heong Thong in Bercham, which is his friend’s shop.

“I saw a situation where an elderly woman was picking up vegetables from the trash during this movement restriction period.

“It was so heartbreaking and that’s when I and my friends decided to work with the farmers from Cameron to salvage the vegetables instead of being thrown in the garbage,” he told Malay Mail when contacted.

“Many have asked why are we putting our lives at risk to do this during the outbreak. But we felt that we should help those in need, especially when it comes to food, at this period of time,” he added.

Kong explained that tonnes of freshly-harvested vegetables were being discarded by growers at Cameron Highlands as they could not be transported to other locations due to the MCO, despite authorities insisting that transport and logistics may continue operating.

He said this has led to difficulties in procuring the transport services needed to move the bulky and perishable food items.

“While the government allows transportation for food services during MCO, the farmers only manage to get small lorries to distribute their vegetables. 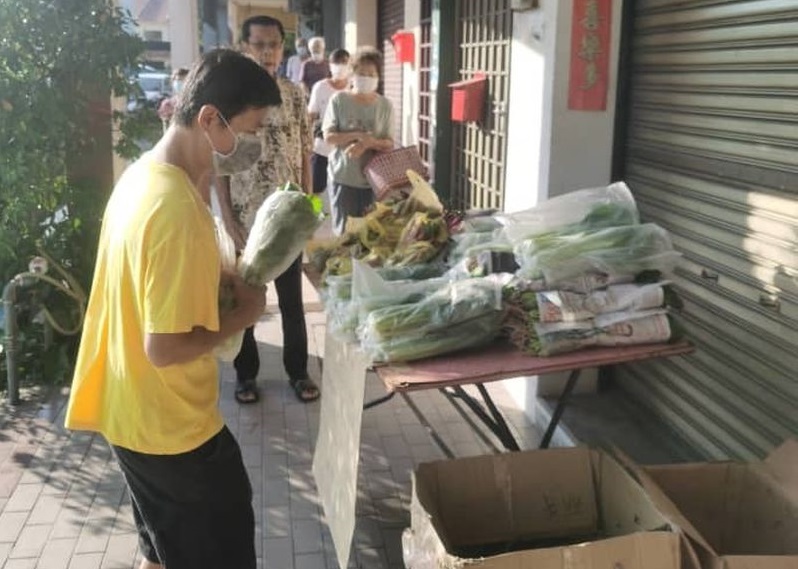 The vegetables are available for collection in the mornings at Pasar Kampung Simee and Perniagaan Weng Heong Thong in Bercham. — Picture courtesy of Jason Kong

“The lorries can’t carry all the vegetables and the farmers can’t sell it either. So instead of throwing it the farmers decided to donate it to those who are in need,” he said.

When asked about the identities of the farmers and how many were involved in donating the vegetables, Kong said they preferred to remain anonymous.

Kong said that he was in charge of spreading awareness about the donation to the public while his other two friends handled the logistics and distribution.

“We started the donation yesterday and we have about 200 packets of vegetables every day, such as cucumber, eggplant, tomato, beans and so on,” he said.

Kong said that the vegetables will only be given to the poor, elderly and people with disabilities.

He emphasised that it was for all in those categories without regard to race.

“We will continue this donation as long as we can and there will be supply for tomorrow morning as well,” he said.