KUALA LUMPUR, Jan 12 — It’s only the middle of the month and you’re already broke. But where did the money go? You didn’t spend all that much, or so you thought.

For those who are diligent about keeping track of their expenses, this problem simply would not arise but for the rest of us, wouldn’t it be nice if you could key into your smartphone every time you spent your money, and by the end of the month, look at the data presented to see where most of your money went?

After all, the key to financial planning is first to know your own spending habits.

Childhood friends from Setiawan, Perak, Allen Ding and Alvin Ting want us to be able to do exactly that. They will launch their Saved 2 app via their start-up Snappymob Sdn Bhd on January 22. This is a revamp of their first version, which was downloaded more than 100,000 times for the whole of 2014 but failed to gain traction as well as monetise. At its peak, there were 15,000 downloads a day.

With this new version of Saved, they want to get at least 50,000 downloads within the first month and they are banking on a new improved app as well as better planned marketing strategies to help them achieve that goal.

By January 2014, Saved was launched in the Apple store as well as the Google Playstore for Android users after six months of development. — Pic courtesy of Snappymob

Ding said the app is targeted at people who are less “sophisticated” in finances but want to at least learn how to manage their budget.

“This is a simple app that can get you at least in the habit of budgeting.

“When you ask someone how much they spend a day, a lot of people aren’t very sure… they can guess but they wouldn’t know for sure.

“Per month especially, if you don’t track it, it is literally impossible. You’ll come up with a number that’s completely bogus,” said Ding, who is the chief executive officer of Snappymob.

The app seems sleek and easy enough to use. Once you open it, you can immediately set your budget for the month, which then automatically calculates your daily as well as weekly average budget.

Each entry would allow you to insert the amount, title of the entry and its category. The time stamp automatically goes to the current time and date but this can be adjusted as well. You can also include a note with your entry.

And then, this is the more interesting part: You can then track your spending in a line graph or a pie chart.

You can also pick the setting, which shows your daily spending, or cumulative spending. And due to request from past users, they have also made it protected by a passcode.

Ding, who is a software engineer, founded the company with Ting, who is the start-up’s director of business development in early 2013. Ding had then just returned following a stint in the US while Ting had just left the commercial banking industry.

The company started by building apps for clients before both of them realised they wanted to focus on producing their own product. By January 2014, Saved was launched in the Apple store as well as the Google Playstore for Android users after six months of development.

A screenshot of the Saved 2 app. — Courtesy of Snappymob.

The app did not do well with Android users, both the 32-year-olds admitted, which made them decide to only build the app for Apple this time around.

The app which was initially free, failed to gain traction as many did not continue with the paid version that costs US$4.99 (about RM17.77). With the second version, they have decided to charge the same amount but promise a sleeker and updated version, which is compatible with the latest operating systems.

“We put a lot of effort into making it hassle-free because in the end, budgeting, you don’t really want to have to do it.

“You rather wish the alternative is you have tons of money so you don’t have to worry about it.

“But if you have to do it, we think you don’t need the complexity. It’s a simple tool that will give you the results you want,” Ding told Malay Mail Online in a recent interview. 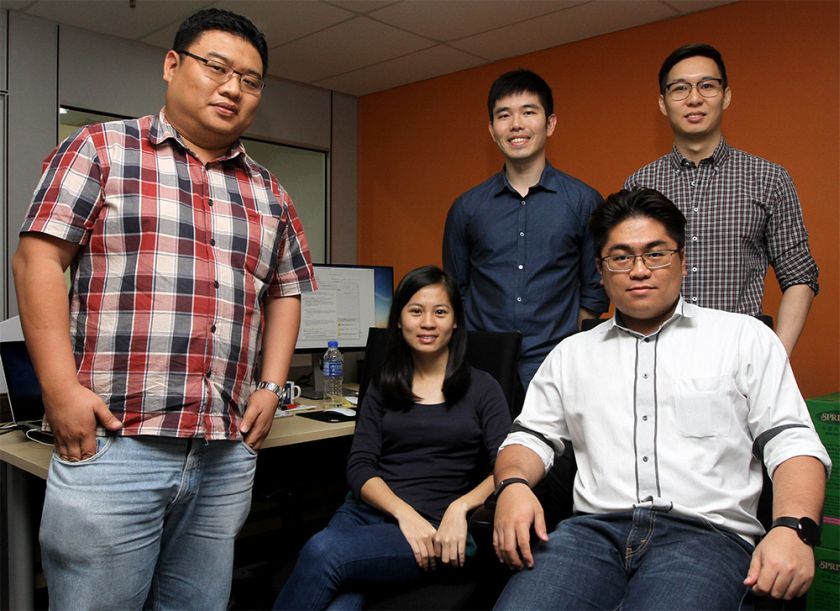 Snappymob co-founders Alvin Ting (left) and Allen Ding (third from the left) poses with the start-up staffs at their office. ― Picture by Yusof Mat Isa

He said, personally, he would forget what he spends on and would always end up overspending.

A screenshot of the Saved 2 app. — Courtesy of Snappymob.

“Only at the end of the month, oh wow, I spent more than I earned this month. That’s the situation that you don’t want to be in,” he said.

Ding said there are some challenges to being an app developer here in Malaysia as the local network and knowledge-sharing pool is not as big as in other countries.

He said there could be thousands of individuals who are in the industry but those whom you know well are in the hundreds. And companies such as theirs that build their own product are probably in the 10s, Ding said.

The start-up has a total of five people working including one designer and two engineers who had worked to build the app.

“I am positive, I am 99 per cent sure you will save more than US$5 within one month, two months, it will pay for itself, the remainder of the year you gain the benefit, you know how much you can spend,” he said.

How to protect your smartphone from hot weather

Has blockchain found a use beyond crypto trading?