Pakatan’s alternative budget shows how it can cut GST

KUALA LUMPUR, Oct 25 — Pakatan Harapan’s (PH) alternative budget for 2018 claimed it could not only cover the revenue loss by eliminating the Goods and Services Tax (GST), but record an RM6 billion surplus.

The federal Opposition coalition said it estimated a net loss of RM25.5 billion in 2018 by eliminating GST and reverting to pre-GST numbers, which it said could be covered by increased revenue from corporate income tax due to a consumption boom and growth in business activity.

“Thus, the elimination of GST will not result in a catastrophic revenue loss of RM42 billion, as alleged by Umno-BN (Barisan Nasional). Instead, the direct fiscal revenue loss is containable at RM14 billion,” PH said.

PH also said it would eliminate RM20 billion from wastage and corruption next year.

“Part of this wastage and corruption includes the slashing of the Prime Minister’s Department (PMD) budget, bringing down the RM20.80 billion allocation to a more acceptable RM8.40 billion,” said PH. 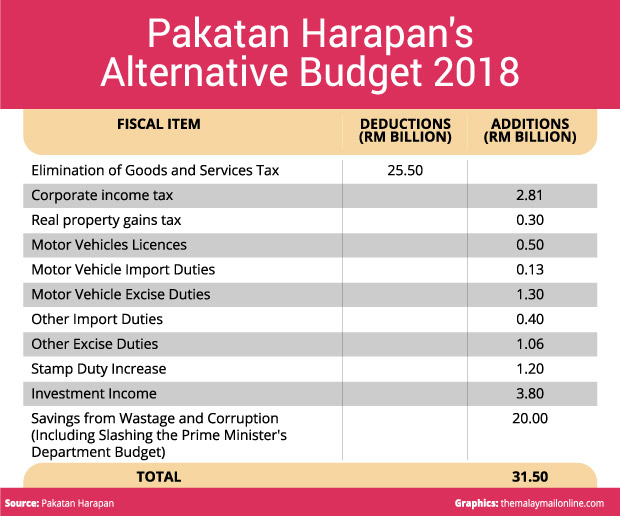 The coalition noted that the PMD had a budget of RM5 billion in 2003 during Tun Dr Mahathir Mohamad’s administration, which would be worth RM8.4 billion today based on a “time value of money” calculation with an average CPI (consumer price index) of 3.5 per cent.

“The calculations above clearly prove that in order to make the elimination of GST work to benefit the takyat, we need to combat wastage and corruption.

“By carrying this out, we will not only be able to completely cover the revenue loss from elimination of GST, we will in fact, record a surplus of RM6 billion,” the budget proposal read.

After eliminating GST, the coalition would then revert to the old Sales and Services Tax (SST) for the time being when they come into power so that the people can adjust with the taxation.

“Our policy is to eliminate GST and bring back SST in the short term. Its implementation may take a year after winning GE14 as we need to prepare and educate both consumers and businesses.

“We will maintain the reporting system that has been implemented under the GST regime but will zero-rate most goods and return to SST equations,” the proposal said.