PETALING JAYA, May 13 — When it comes to bak chang, experienced hands like 70-year old Lee So Loe make the most delicious rice dumplings.

Also known as Ah Wan, she is famous for going viral in August last year when people posted her selling affordable food like nasi lemak, tong sui and bak chang from a trolley near the SS22 Maybank.

She works from her stall inside the Pusat Penjaja MBPJ Damansara Jaya, where you can find her on weekdays. Since she works alone without any helper, she is only open for business a few days in the week.

Originally from Taiping, she had picked up her culinary skills from watching her mother cooking and baking to fund their large family.

She used to be a seamstress. Later, she opened a char siu wantan mee shop at Taman Yulek, Cheras.

If you take a look around her stall, you can spot various photos and newspaper articles in Chinese about her business. During the heydays, she would make dim sum and brew drinks at the coffee shop she ran with her sister. 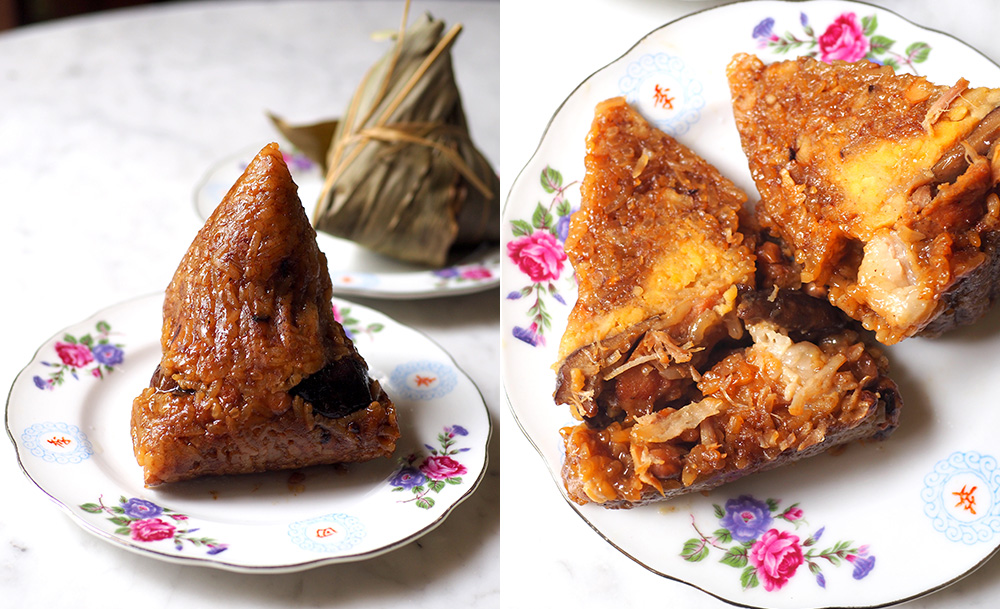 The Hokkien 'bak chang' is beautifully wrapped with sharp edges and soft rice grains fried with black eyed beans to flavour it (left). Inside the rice dumpling, you will discover layers of yumminess from soft mung beans, a combination of fat and lean pork, shiitake mushrooms and salted egg yolk (right).

Later, she gave that up and moved to the food court at Damansara Jaya which is near her residence. As her children are all grown up, she keeps herself busy by operating this stall.

She used to offer wantan mee but during the pandemic, sales were dismal. Hence she switched to items like nasi lemak, achar, tong sui and bak chang. She believes in keeping the prices reasonable since this gets her customers who recommend her food via word of mouth.

As foot traffic was bad within the food court during the pandemic, the enterprising woman decided to sell her food nearer to the busier area near the bank.

I stumbled upon her stall inside the food court one Saturday. She was the only stall open where she served tong sui for only RM3.

The snow fungus dessert had a well balanced sweetness that I enjoyed. You get dried longan, sago pearls and red dates. The alkaline water dumpling is superb with a supple texture and delicious drenched in 'gula Melaka' syrup.

Apparently her bubur cha cha is also sought after but she will only make it occasionally. Usually she serves the snow fungus or suet yuet tong sui. As she had bak chang for sale, I bought the two varieties to sample at home.

Even though she is Cantonese, she makes the Hokkien savoury bak chang which is more popular with customers. The pyramid shaped rice dumplings aren't too big and just nice for a light meal. They're freshly made every day so you just need to heat it up to eat at home.

What impressed me was how generous and flavourful the fillings were for the bak chang. You get the aroma of black eyed beans in each rice grain as Ah Wan fries them together. Usually people omit the fatty pork from their rice dumplings for health issues but traditionally, it's essential since it lubricates the dumpling and infuses it with flavour.

Hence I am happy that this rice dumpling had a nice balance of fatty bits and lean pork. You also have a layer of soft mung beans and a hit of saltiness from the salted egg yolk.

There are also pieces of shiitake mushrooms. The only ingredient she omits are chestnuts, due to the high price. One bak chang that weighs around 220 grams is priced at a very reasonable RM5. 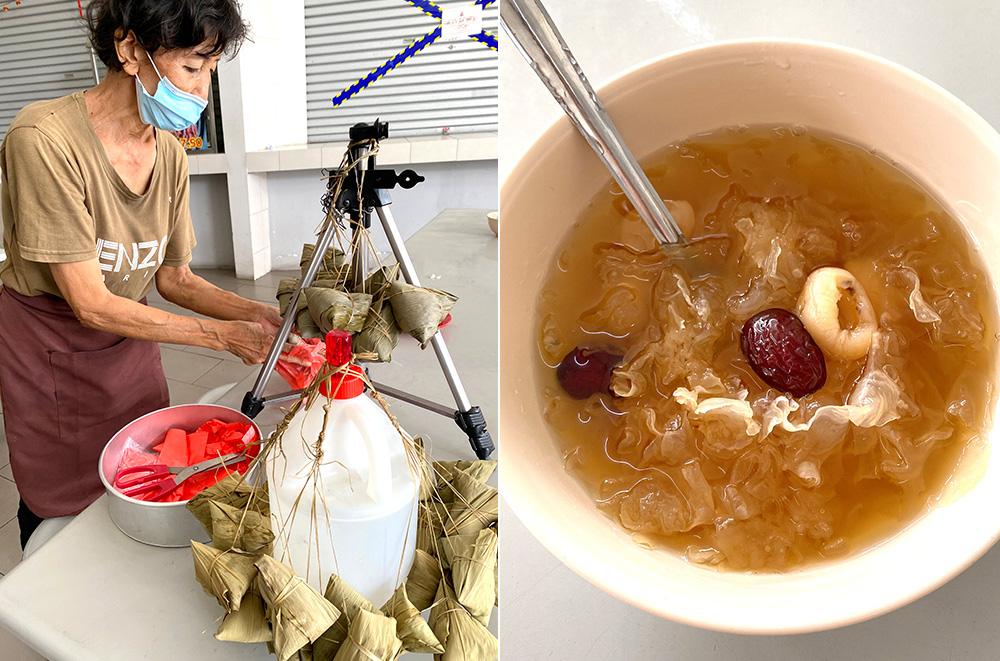 Look for Ah Wan at the food court or around SS22 Maybank on weekends (left). You can get a satisfying bowl of 'tong sui' filled with snow fungus, red dates, longans and sago pearls for just RM3 (right).

What blew me away was her alkaline dumplings or kan sui chung. I tend to not buy these as most vendors offer a very disappointing version. Most times, the texture is rubbery. Or hard.

My usual preference are the tiny ones you find in Thailand. This version is rather similar as it seems Ah Wan uses the pricier Thai glutinous rice to make her dumplings. Hence the grains are much finer and the texture is more supple when you dig into the dumplings.

This version is plain without any filling that goes well with a fragrant gula Melaka syrup. Drench the golden coloured dumpling with the syrup and you will get a glistening delight.

I had bought four pieces which I slowly savoured day by day. She sells the dumplings that weigh about 100 grams each for RM1.30.

Ah Wan tells me that her daughters weren't fans of this type of dumplings too until she persuaded them to taste them one day. Now they clamour for the delicious morsels. They also give it to their friends who look forward to the alkaline dumplings too. 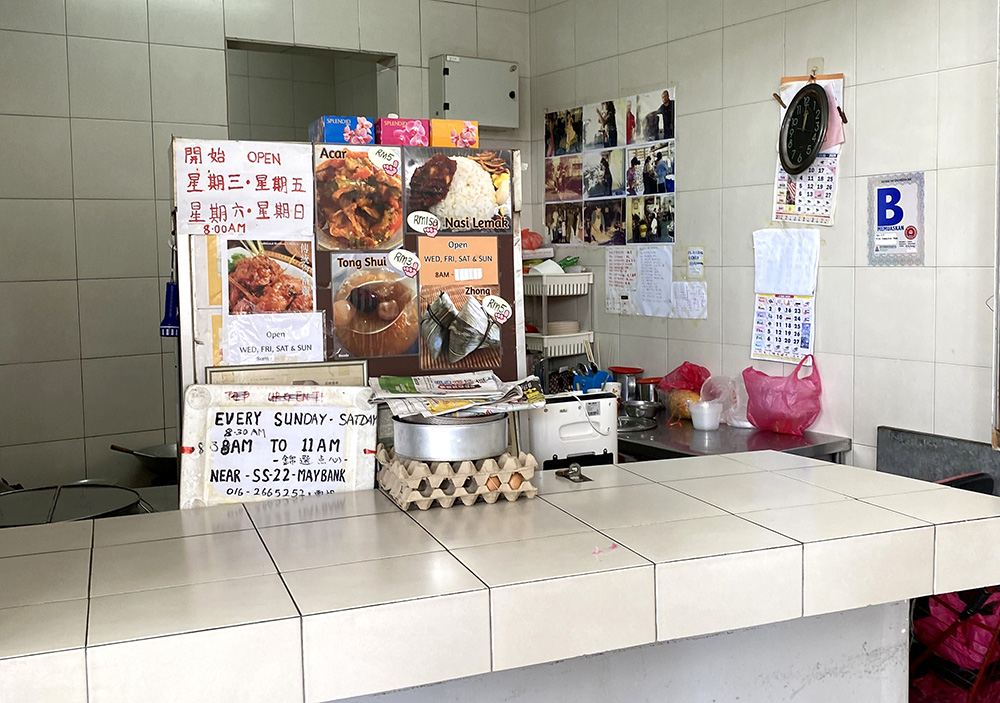 Look for her food stall at this almost empty food court right in front of Atria Shopping Gallery.

With Dragon Boat Festival or Duan Wu Jie falling on June 3, it is best to pre order the bak chang from her at the stall especially if you want a large quantity.

Since she is the only one making the rice dumplings from scratch, there are limited numbers available every day. They tend to sell out quickly as customers buy a few to try and return the same day to buy up everything once they discover how good they taste.

Currently her handphone is giving her issues and she hopes to replace it next week with a newer and better model. You can find her at the stall till evening making food even though it's beyond her operational hours. It's only on Mondays that she goes out to shop for ingredients.

Stall No. 25, Pusat Penjaja MBPJ Damansara Jaya (across from Atria Shopping Gallery), Jalan SS22/23, Damansara Jaya, Petaling Jaya. Open on Wednesday, Friday, Saturday and Sunday from 8am to whenever food finishes. For Saturday and Sunday, she will open a temporary stall from 8.30am to 11am near the Maybank along Jalan SS22/19. Tel: +6016-2665252.