Waste not, want not: The frugal way to make mouthwatering meat floss

KUALA LUMPUR, March 6 — Cooking ought to be simple. Sometimes that means having a few basic ingredients and working wonders with them.

But how you cook also matters, as a tale from my childhood has always instructed me.

The story goes: Once upon a time there lived a king who was feeling poorly. He asked the palace cook to boil him an entire chicken every day, for its nourishing soup. So the cook did exactly that.

After a month or two of this, the king was feeling no better. But he noticed that the cook was getting plumper and plumper. He sent his pageboy into the kitchen to investigate.

The boy went and returned, reporting that the cook would sup on the meat after ladling the soup into a large bowl for the king.

So the king decided he would eat the meat instead; the cook could have the soup. And so he instructed the cook to switch it up. And so the cook did.

After another month or two of this new routine, the king was not feeling any better. But the cook — oh, that cook! — remained plump and got plumper still, with the rosiest, healthiest cheeks in all of the land. How in the world?

These days, what with bone broth recipes being swapped by tech bros and startup founders, we know that it was simply a matter of how long the chicken was cooked. 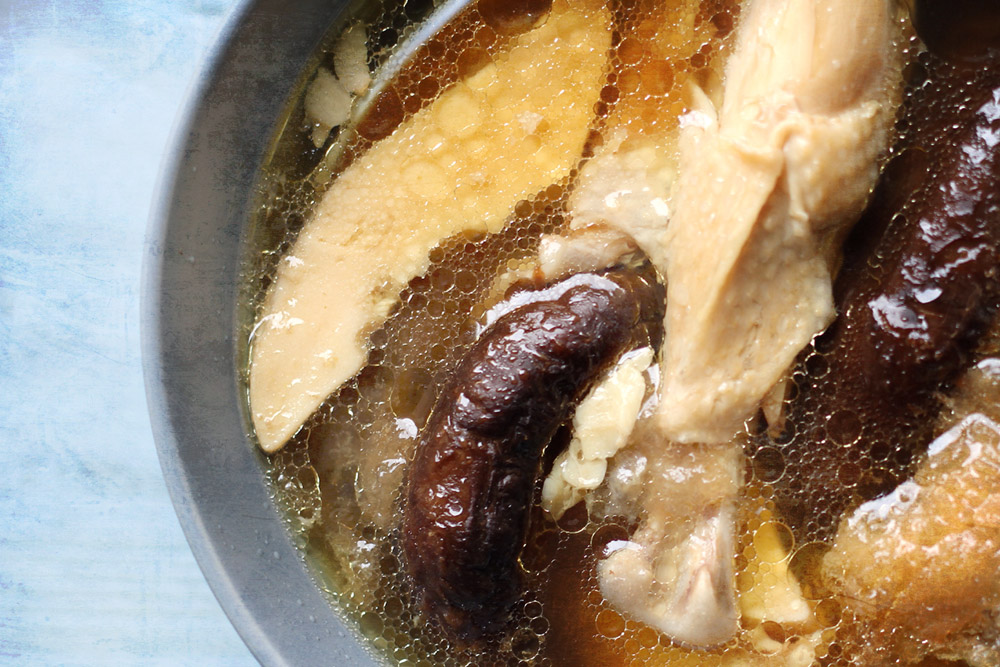 Use leftover meat from soups and stocks to make your own meat floss.

Boil it for a shorter time and most of the nutrients stay in the meat. Boil it for longer and the soup receives all the good stuff.

I never understood the entire A/B decision making process of this little parable. The glutton that I was as a kid, I would have had both the soup and the meat, thus ensuring I would have enjoyed the nutrients one way or the other.

As an adult, I always felt it was a waste when I saw my fellow dining companions happily slurping up their double boiled chicken soup and leaving the (admittedly now flavourless) meat in their bowls untouched.

Sure, after so many hours of simmering, most of the vitamins and flavour has seeped into the broth via the fat. What remains in the meat is essentially protein and water content. But that’s nutrition too, if you can make it palatable again.

What I usually do is just dip the pieces of meat in some soy sauce and eat them that way. If I’m cooking at home, it’s no hassle to shred the cooked chicken and add it to a salad. Once tossed with some dressing, it’s delicious.

Waste not, want not.

Ah, but if you have a little more time, you can seriously level up what remains after making a big batch by making your own meat floss.

Yes, the sort you buy when you queue up for your stash of bakkwa before Chinese New Year. The sort you find covering a soft, doughy bun at your local neighbourhood bakery.

After long hours of boiling, most of the meat would have disintegrated.

The difference being you could have this at a fraction of the price of buying it outside. For one, you already have the main ingredient — the meat — as leftovers from another recipe, i.e. making soups and broths.

All that remains is a little seasoning from pantry staples and a bit of patience, and you’ll have a batch of preservatives-free, customised meat floss for practically free!

It will be delicious, yes, but more importantly, so satisfying to get a second dish, to get another food item, where there was none before. Waste not, and whet your appetite instead.

When travelling in Taiwan, I observed meat floss, or ròusōng, being employed in a wide variety of tasty dishes — from stuffing for yóutiáo “sandwiches”, where its cotton-like texture contrasted well with the greasy deep-fried crullers, to bowls of savoury dòujiāng, where it played the role of an atypical garnish for the steaming soy milk.

Other cultures have adopted this ingredient, albeit in unique ways. In Thailand, snakehead fish (pla chado) is first dried before its bones and skin are removed. Next it is crumbled and fried with sugar and chilli paste until a spicy-sweet fish floss is produced. 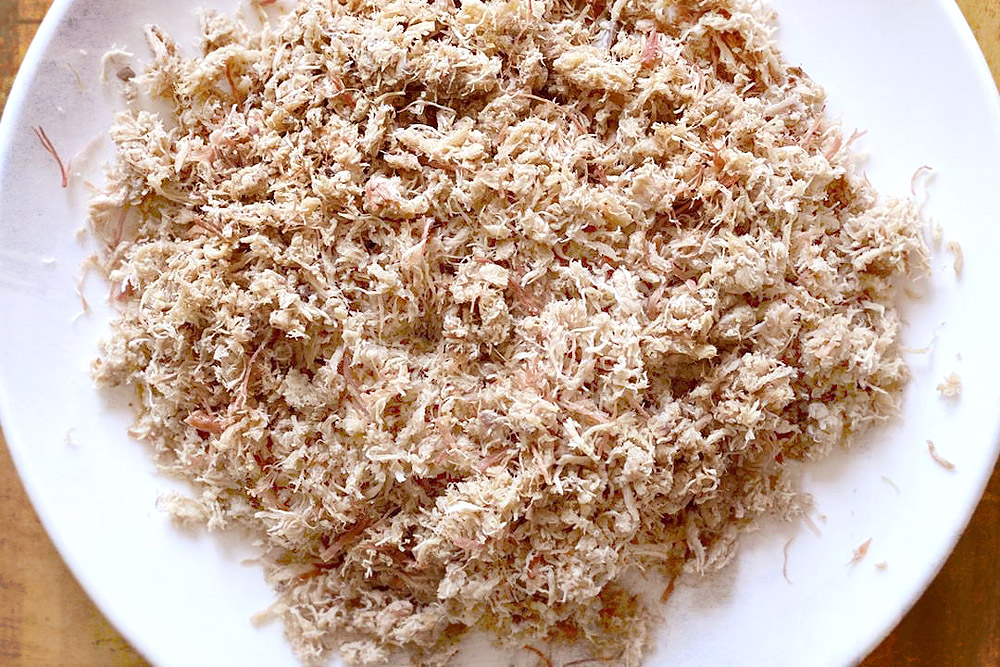 Dry out your shredded meat before pan-frying.

Yes, you could use just about any type of meat — besides popular versions made with pork and chicken, you could also try beef, lamb or venison. And yes, even fish!

Of course, traditionally ròusōng is made by stewing meat until it can be shredded. Here, we are using already cooked meat from boiling soup; quite often the meat would already have disintegrated given enough hours of simmering, making the step of shredding them a breeze.

Rather than sugar, you could use pineapple juice. Imagine the tiny chunks of caramelised pineapple that are studded all over a slice of artisanal bakkwa.

Try mixing different types of meat flosses together or varying the quantities of seasoning used to suit your personal preference.

Just because this is a frugal way to make meat floss at home doesn’t mean it can’t be fancy too. 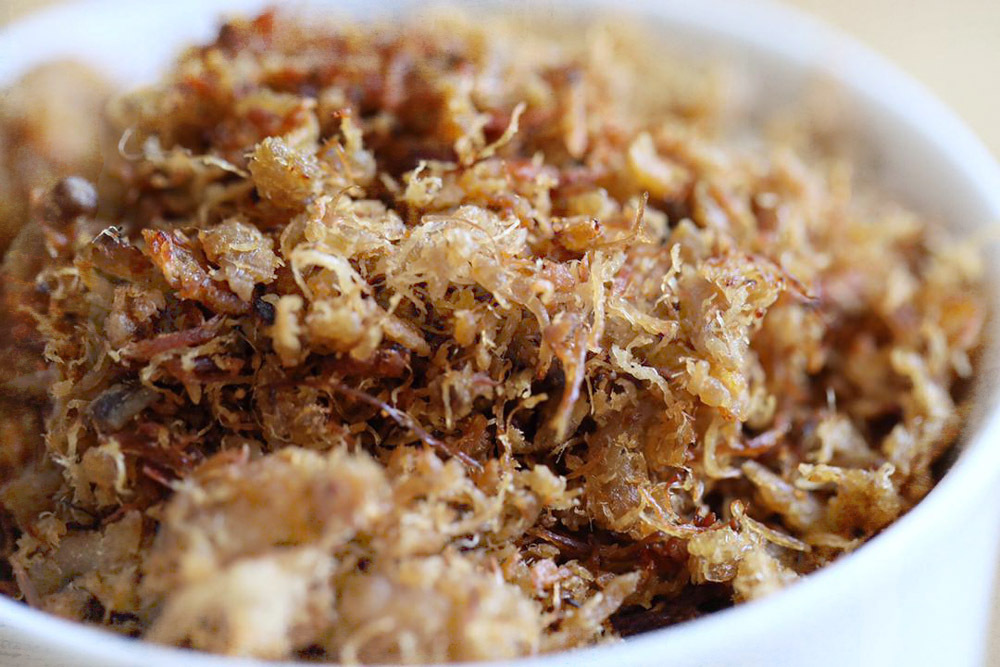 You can mix various meats and even fish to make a floss blend. 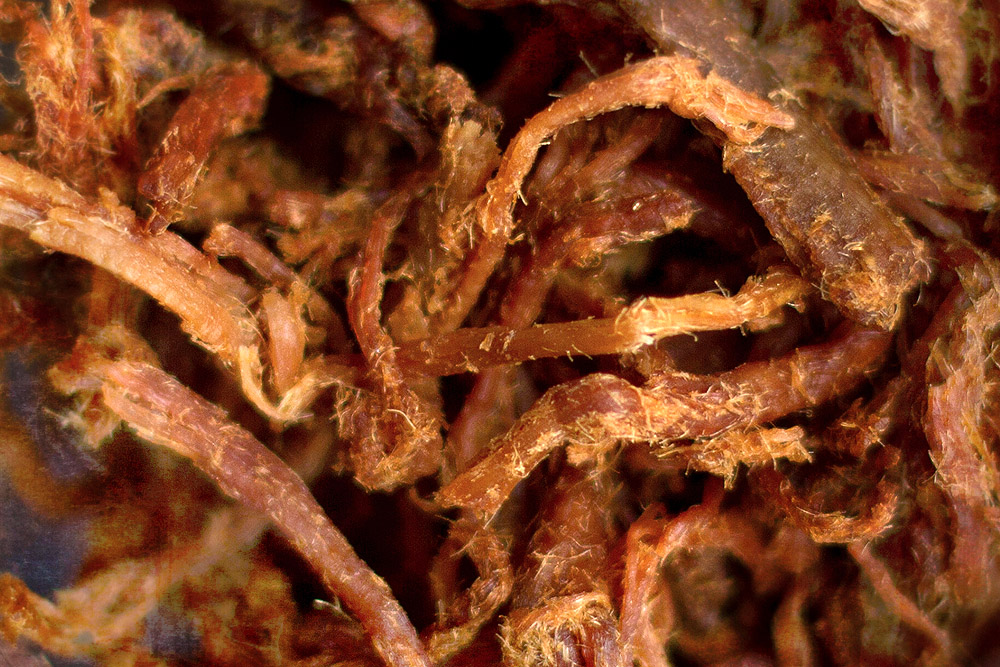 Adjusting the seasoning can result in different flavours and colours.

Heat oil in a large wok (or non-stick frying pan); use medium heat. Add the seasoned shredded meat mixture to the wok. Stir fry for about 10-12 minutes until the meat has absorbed all of the liquid from the seasoning.

Reduce the heat to its lowest setting and continue to stir constantly for about another 20-30 minutes until the meat dries out further and resembles the final texture of your desired meat floss, coarser or finer to your liking.

Remove from heat and transfer the meat floss onto a large tray or plate. Allow to fully cool down before storing in an airtight container. As no preservatives are used, the meat floss is best used within a week.