OCTOBER 18 — I still can’t believe- in the midst of battling this current wave of Covid-19, we still have politicians calling for local elections especially in Sarawak. This is absolutely uncalled for!

I have summarised a few points that will help with the understanding why we should be worried. To help illustrate this, I will use the aid of a graph which I have adapted from www.ourworldindata.org (reference lines added by yours truly) 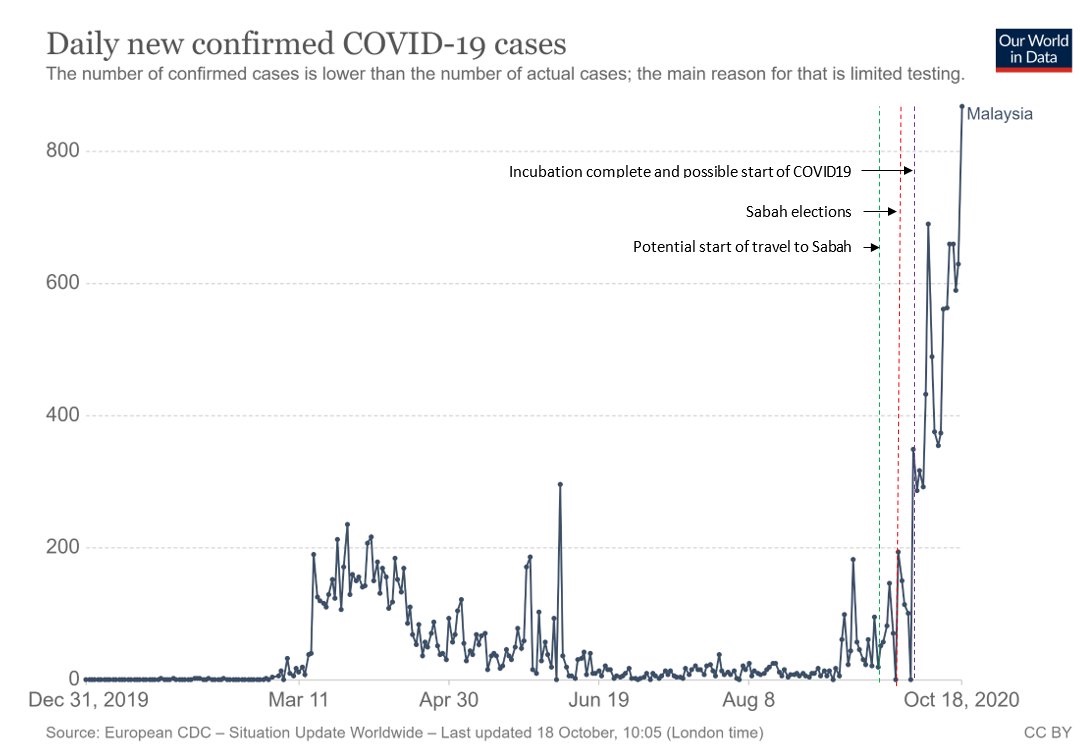 The graphs depict the number of cases that we were seeing in our country on a day to day basis. The green line represents the day that most people started to travel to Sabah, the red line was the day of elections and the purple line shows the earliest possible day of completed incubation of the virus amongst those infected.

Now this might be rough numbers with some confounders, but let’s look at this from a bigger perspective.

1.            With many people possibly carrying this virus without having any symptoms (asymptomatic), many would have brought this virus to Sabah from their respective states. We can also think about it as the day many people who arrived started to get exposed to the virus. We must remember that many people would have come out to work at that time as there was a window of opportunity for income (little did many expect it to be the window period of spread as well)

2.            With many now coming back to their hometowns and visiting many places, the day of the elections came- possible with the highest number of people being in Sabah and a heavy day as far as travel was concerned. This included workers who were helping with the polling, those voters and those people who again saw this as a window of financial opportunity.

3.            The day of the elections and the next day- travel home after voting. Again, crowding and a window of opportunity not only for those who saw an opportunity to earn some income but also for the virus

Now in that chronological order, let us extract salient points to consider if Sarawak has a physical voting

1.            With a call of elections in the biggest state in Malaysia- we are going to get high movement of individuals from other states into Sarawak. Yes, Sarawak has a 14-day quarantine period, but remember that these people have a chance of contracting the disease from Sarawak and bringing it back with them to other states. Also, movement within the state between Sarawakians especially from the urban areas to the rural areas might also see a movement of the virus

2.            Polling day- the high movement between individuals, the contact that people will have especially amongst those who might be carrying the virus is worrying. I mean just look at the graph and the numbers after 6 -10 days from polling day put an astronomical figure on the numbers.

3.            The travel back and carrying the virus along. With no compulsory quarantined imposed like they did with Sabah, are we again risking another wave before this current one is resolved? The worrying bit is not only the infection rate but the introduction/re-introduction of the virus into the vulnerable populations.

4.            When there is a high number of cases, especially in areas where healthcare facilities are not optimal especially in geographically challenged areas- the risk of having higher deaths due to late presentations must be expected. Also, the reach of medical aid to such communities will be a challenge.

5.            With so much of hard work put in within the state of Sarawak especially with their task force, are we ready to combat a wave that could be perhaps more catastrophic that the Sabah wave? Let’s not forget that we are excluding the possible high-density residencies within the state especially in the Rumah Panjang and communities where living in large numbers are a norm. Also, we are overlooking the fact of contact tracing in such areas. Can all the houses be QR coded before the elections? Can we ensure that Sarawakians especially the rural folk comply to this? What about internet connection/connectivity to the rural folk?

Please note that I have not even began to ramble about the politicians that might visit from Semenanjung and the travel from one place to another campaigning, coming back and then carrying the virus with them. Let alone, don’t get me started on the quarantine that they must adhere to after that.

The truth is, we aren’t ready to have another seat/state by-elections or neither are we ready for a general election. Let’s bite the bullet now and not have the elections. Unless, an eVoting system can be rolled out in time for this- but then again, how will the rural folk be counted for their voting? Thus, it is highly important that the building of infrastructure- healthcare, administration, internet/multimedia facilities be focussed on East Malaysia.

This upcoming Nov 2 parliament sitting must see a bipartisan proposal and support to not have any sort of elections until the Covid19 situation is curbed.  Leaders- please let us for once stand-up and acknowledge that there is something bigger to the situation- the health and well-being of our rakyat. Please leaders- stand up now and account for the people. Sarawak state- stand up and account yourself for the well-being of not only the people of Sarawak, but also for 32 Million fellow Malaysians. Do not put before Malaysians a choice of practicing their constitutional rights and their health well-being.