Naim Daniel and the divine oath that is ‘Sumpah’

Sunday, 16 Feb 2020 8:00 AM MYT By Zurairi A.R.
Follow us on Instagram, subscribe to our Telegram channel and browser alerts for the latest news you need to know.
By Zurairi AR

FEBRUARY 16 — It seems as if the annual Anugerah Juara Lagu (AJL) has hit a low with its 34th iteration as all that people remember from last Sunday night are the controversies surrounding the performances.

Rockers Drama Band stole the show with its parody of the many stories covered by gossip columns over the past year: from the infidelities of televangelists to the infamous pair of Najib Razak and Rosmah Mansor.

The last, in particular, received praise from many in the public, even more so when the band was censured by TV3 which refused to upload the performance onto its YouTube channel, and later was forced to apologise following some complaints.

But the praise could not wash away the bitter taste left by Drama Band’s decision to also lampoon Haneesya Hanee who had to give up her Dewi Remaja title following moral policing over her nightlife activities.

The band also had a backdrop saying Pendusta (“Liar”) while mocking her and it also mocked fellow contestant (!) Haqiem Rusli who had admitted to depression.

Even without the parodies, the band would have raised eyebrows with itheir KISS-like outfit; vocalist Aepul wore a mask resembling the shinigami Ryuk from manga and anime Death Note — earning the band backlash from the conservative crowd for depicting “demons.”

Singer Aina Abdul was similarly criticised by mental health advocates for allegedly glamourising suicide after performing in a white dress drenched with fake blood — which flowed from “wounds” caused by her “stabbing” herself in the chest.

Aina later said she was just portraying the feeling of heartbreak.

Prior to this, Hafizan Mohd from music blog “Muzikita” had lambasted local artists for setting their bars low, and making music solely just to reach the final AJL stage — rather than shooting for the stars.

“The culture of #RoadToAJL has to be stopped because in the end the winner will merely live as a domestic champion.

“AJL has been held for more than 30 years. Really it has not contributed at all towards the advancement of the local music scene towards a bigger arena,” he wrote.

With such dismal finalist entries (and the felt absence of the revolutionary Hael Husaini this year — barring the Siti Nurhaliza song he wrote), it was pretty obvious from the start that Naim Daniel and the song he wrote with renowned composer Omar K, Sumpah, would take the crown.

Sumpah seemed destined to win. It carries many of the elements that made Hael’s Jampi champion two years ago — down to the title (jampi is “spell” versus sumpah, which can both mean “curse” and “oath”).

That may have been the reason why Sumpah sounds much more fresh than its other rivals.

The first thing you hear is a choir of female voices, that evokes a coven of witches befitting its title. Minimalist piano leads the first verse, before a sprinkling of whimsical music box enters.

The simplicity of the arrangement lets its earnest melody shine — as lauded by chief judge Ajai, who as if in a backhanded compliment said: “No matter who sings this song it would still be good. This doesn’t mean I wanted to say [Naim] didn’t sing it well, but there were other singers who sang much more skilfully just now.”

The choir and music box together backs the first chorus: “If the moon would no longer shine/Brighten my darkness even in pitch black/Hear me out/My soul is sincerely for you”

On the surface, the lyrics reflect a yearning for love and steadfast patience even in the face of an excruciating relationship.

However, there may be a hidden meaning in this song; something which I noticed is a running theme with songs from other artists in the same stable as Naim — World Peace Entertainment — like Ismail Izzani, Harris Baba, Firdaus Rahmat, and Daniesh Suffian.

Many songs from World Peace can actually be read as religious odes. Its music videos feature verses from Islamic scriptures. The “love” theme can almost always be easily interpreted as love for God. Similarly, Naim’s Sumpah can also be read as the yearning for God’s love, even while facing a painful existence on Earth.

When viewed this way, these lyrics carry a deeper meaning, from “Love, I will care for you/Until my pulse no longer beats” to “I hope you hear/What I’ve whispered all this time/Without you my life has no meaning.”

Other outstanding finalists were justly rewarded. Hael and Ezra Kong’s exquisite Anta Permana sung by Siti Nurhaliza (who made a surprise performance despite initially naming Bob Yusof to sing on her behalf) placed third. 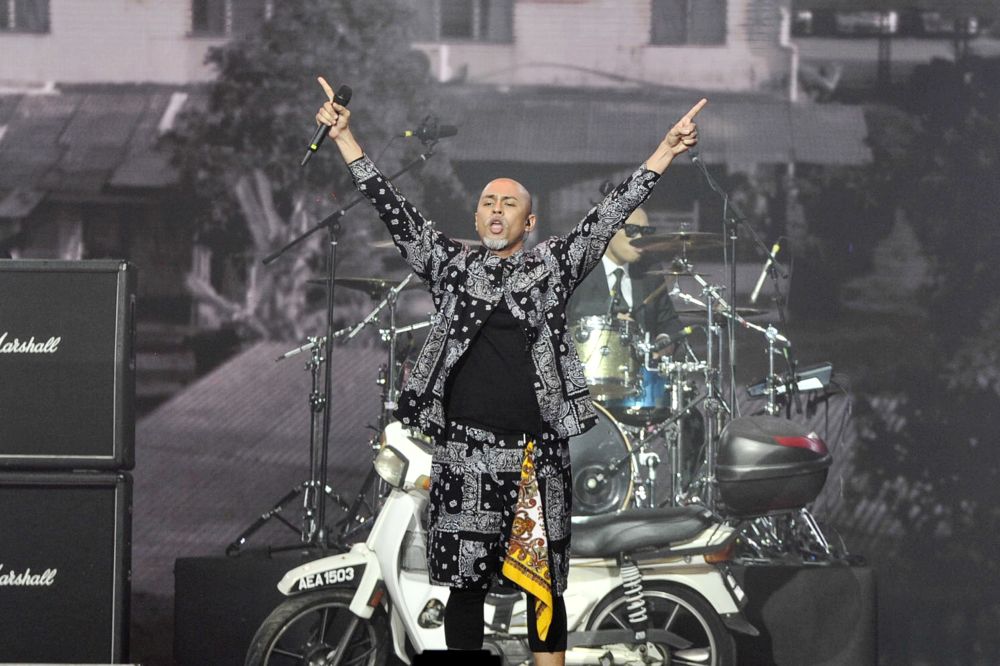 The second place went to Navigator’s Bangkit written for rapper Aman RA, a befitting honour for the local hip-hop scene.

Bangkit may not be the best example of the dynamic scene these past few years, but it is indeed an exceptional song — a wake-up, motivational call for public housing kids (Aman himself is a self-proclaimed “Budak Flat”).

If AJL34 left you feeling slightly underwhelmed with the state of Malay pop music, you are not alone.  It is hardly the yardstick with which to measure the scene, which is arguably at its most exciting and diverse in the last decade or so.

Many chart-topping and critically acclaimed songs did not even qualify as Muzik-Muzik semi-finalists.

There was no entry by probably the hottest local hip-hop group now, K-Clique — nor the hottest producers last year, Alif and MFMF.

There were no young future stars the likes of Andi Bernadee and Bil Musa, nor comebacks by Elizabeth Tan and Dayang Nurfaizah, not even Hael and Kong’s mind-blowing Bila Entah by Aisyah Aziz.

Sumpah was not even Naim’s best song last year (at least for me) — it was Adakah Engkau Menungguku, his collaboration with Tuju from K-Clique.

The Malay pop scene is full of fresh sounds drowning out the clichéd 90s ballads recycled by some artistes. AJL just does not reflect this scene.