JOHOR BARU, Jan 13 — The Johor police will take the soft approach for the first three days of the movement control order (MCO) in the state to allow the public to get used to the situation, before strict enforcement starts.

Johor police chief Datuk Ayob Khan Mydin Pitchay said that during this period, police personnel will attempt to educate the public instead.

He explained that this is to enable the community to understand and comply with the standard operating procedure (SOP) as enforced by the government.

“For the first three days, we (police) will take the soft approach before we start to tighten enforcement by taking firm action.

“So, I advise the public in Johor to comply with every rule and law according to the MCO’s SOP during this time,” said Ayob Khan after inspecting a roadblock along Jalan Johor Baru-Ayer Hitam in Skudai here today.

The busy road is considered a main route that leads to the North-South Expressway, in front of Paradigm Mall Johor Baru.

Ayob Khan added that police observation on the first day of the MCO’s implementation in the state found that compliance was between 97 and 98 per cent.

“For the initial stage, the police will operate a total of 46 roadblocks at various locations throughout the state and have plans to add another five roadblocks soon.

“At present, a total of 204 police officers and personnel will be involved with the roadblocks together with the assistance of 35 members of the Malaysian Volunteer Corps (Rela).

“Apart from that, from tomorrow, a total of 351 officers and members of the Malaysian Armed Forces (ATM) from the Malaysian Army Infantry’s 7th Brigade will participate in enforcement operations at all roadblocks throughout Johor,” said Ayob Khan.

The strictest conditions, which prohibits all non-essential movement and businesses from operating, have been placed on Kuala Lumpur, Selangor, Putrajaya, Penang, Johor, and Labuan where daily Covid-19 cases have been the highest.

Six others ― Pahang, Perak, Negri Sembilan, Kedah, Terengganu, and Kelantan ― have been placed under a conditional MCO or CMCO, a slightly relaxed iteration of the order. Only two states — Perlis and Sarawak — are currently in the recovery phase of the MCO. 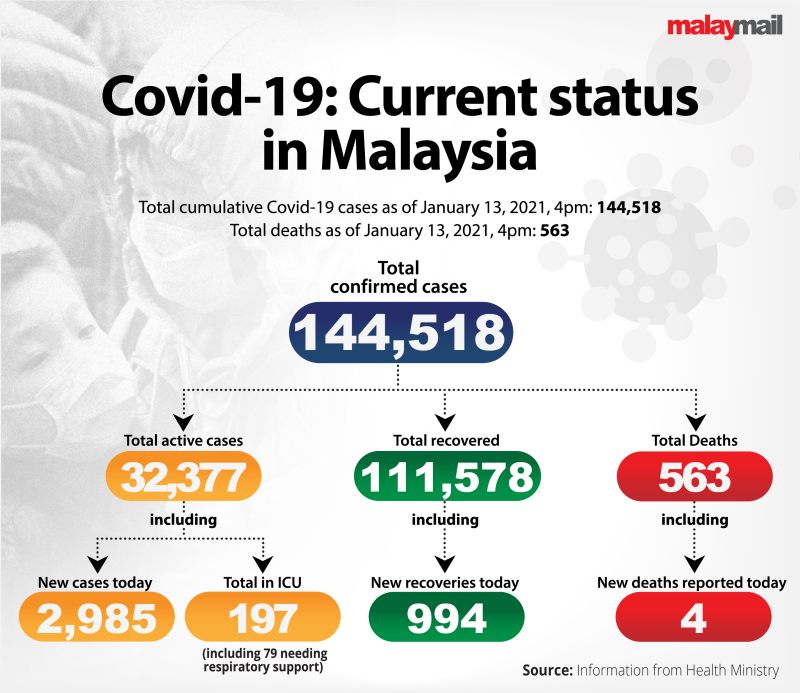