KUALA LUMPUR, , April 27 — Every individual who is arrested for allegedly breaching the movement control order (MCO) will go through the same process of having their statements recorded by the police first, before the Attorney General’s Chambers (AGC) decides on whether the purported offenders will be charged in court, senior minister Datuk Seri Ismail Sabri Yaakob said today.

During a press conference, Ismail Sabri was asked to weigh in on the public’s confusion about the standard operating procedures (SOP) for those arrested for breaching the offences, where it appeared that some were taken to court directly while others have their statements recorded first.

Ismail Sabri then addressed the confusion, saying that the rules are the same for all individuals arrested for allegedly violating the MCO — where all Malaysians are required to stay at home except for essential activities.

“Actually from the aspect of rules, each of those who are arrested must have their statements recorded, because the one that determines whether to bring them to court or not is not the police.

“The police after recording the statement will send investigation papers to the attorney general and the Attorney General’s Chambers is the one that will decide whether the individual will be charged in court or not.

“So the SOP is the same for each individual that is arrested before being presented to court, so it is not the police to determine if the person is charged or not, but it’s the AGC,” he said in the press conference that was broadcast “live” this afternoon.

Amid strict enforcement of the MCO, several high-profile cases of alleged MCO breaches were reported, including a lunch gathering in a Perak tahfiz school where social distancing was allegedly not complied with.

The police investigated and recorded statements from Deputy Health Minister I Datuk Dr Noor Azmi Ghazali and Perak executive council member Razman Zakaria over the Perak lunch event, with the duo apologising over the matter.

Razman’s son had on April 20 clarified that both he and his father were not fined or arrested, but had returned home after police took down their statements. Police had on the same day said the investigation papers would be sent to the Attorney General’s Chambers for further action.

Umno president Datuk Seri Ahmad Zahid Hamidi’s daughter, Datuk Nurulhidayah Ahmad Zahid, recently attracted controversy, after posting on Instagram regarding her visits to a minister and a deputy minister in relation to her non-governmental group.

Nurulhidayah later challenged her critics to lodge a police report after she was accused of breaching the MCO by making the visits.

The controversy grew when critics contrasted how Nurulhidayah was treated by the police in contrast to the police’s stern approach to other MCO violators, such as the arrest of a student who was fined and sentenced to one-week jail term for sending a birthday cake to her boyfriend at his home 800 metres away.

On April 25, police confirmed that it was investigating Nurulhidayah and her husband over the alleged MCO violations involving two alleged offences — under Section 269 of the Penal Code that involves negligent acts likely to cause the spread of a dangerous disease and Regulation 3(1) of the Prevention and Control of Infectious Diseases (Measures within the Infected Local Areas).

Previously on April 18, Ismail Sabri, when commenting on the Perak lunch event involving senior politicians, had said no one is above the law and that the MCO rules apply to everyone.

The authorities had on April 8 started issuing compounds or fines of RM1,000 to those who breach the MCO with a two-week deadline to pay, but Ismail Sabri later announced on April 14 that those who are arrested will from April 15 onwards instead be remanded and brought straight to court as the RM1,000 fine was seen as an ineffective deterrent.

How many arrested so far

Yesterday, the police together with the Malaysian Armed Forces ATM held 829 roadblocks throughout the country and inspected 377,623 vehicles, while the authorities carried out 35,346 spot-checks on 6,131 premises throughout Malaysia.

Today, Ismail Sabri said the police has as of April 26 (yesterday) arrested a cumulative total of 20,617 individuals for allegedly breaching the MCO.

This includes 606 individuals arrested on April 26 for allegedly violating the MCO, comprising of 556 individuals who were remanded and 50 who were released on police bail.

Ismail Sabri also said 22 individuals were yesterday the latest to be charged in court over MCO violations. 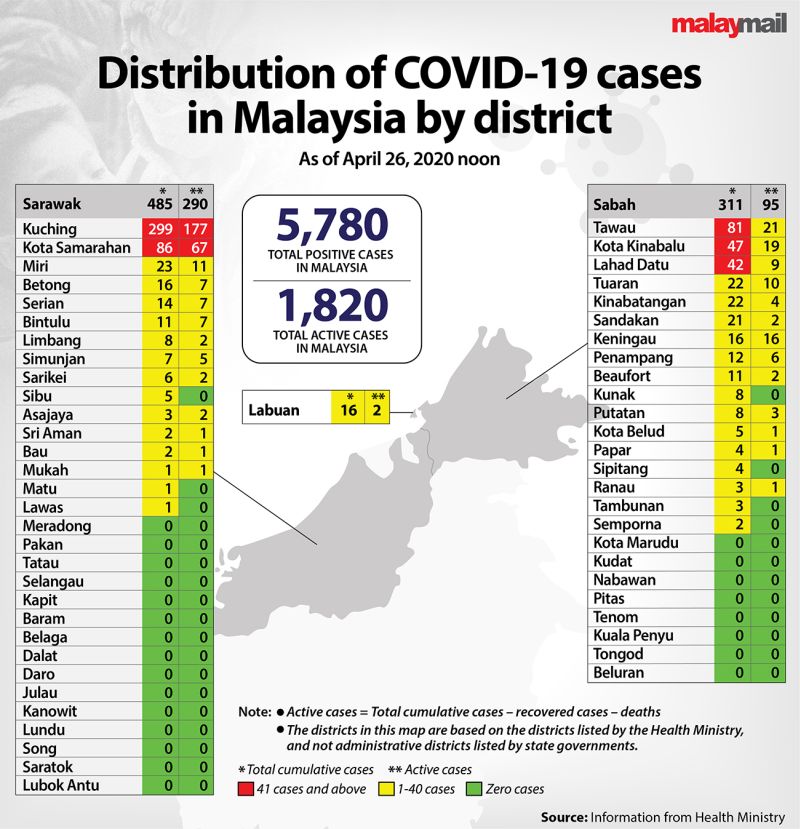