Al-Sultan Abdullah has consented to conduct a one-to-one interview with all 222 MPs to find the best solution to the country’s current political development. — Picture by Miera Zulyana
Follow us on Instagram, subscribe to our Telegram channel and browser alerts for the latest news you need to know.

Al-Sultan Abdullah has consented to conduct a one-to-one interview with all 222 MPs to find the best solution to the country’s current political development.

During the first session today, the interview was held at random without following the order of the political parties and was conducted at the discretion of the Yang di-Pertuan Agong. 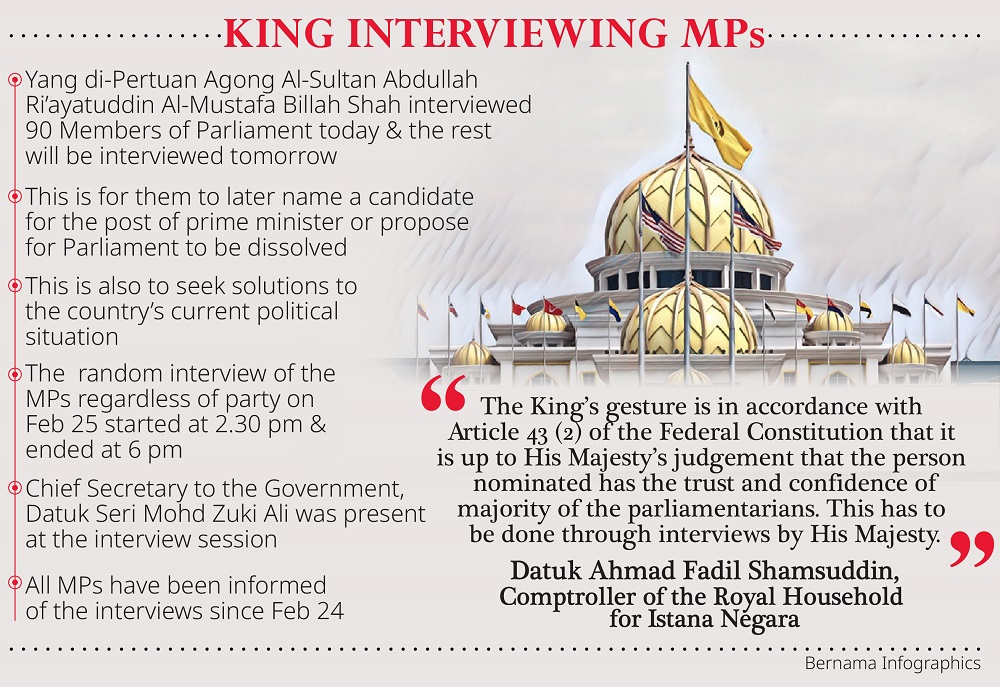 Each MP was given some three minutes each for the interview with His Majesty which was witnessed by Chief Secretary to the Government Datuk Seri Mohd Zuki Ali. The session began at 2.30 pm.

The remaining 132 MPs will have the same interview session with His Majesty tomorrow.

The notice about the interview was delivered to all MPs by the palace yesterday, in accordance with Article 43 (2) of the Federal Constitution.

Meanwhile, according to some MPs met by reporters at the Istana Negara main gate today, Yang di-Pertuan Agong had sought their opinions on whether to name a new prime minister or dissolve the Parliament.

“We have made known our choice, however, it is up to His Majesty to make the final decision,” said Kuala Kurau MP Datuk Seri Ismail Mohamed Said. 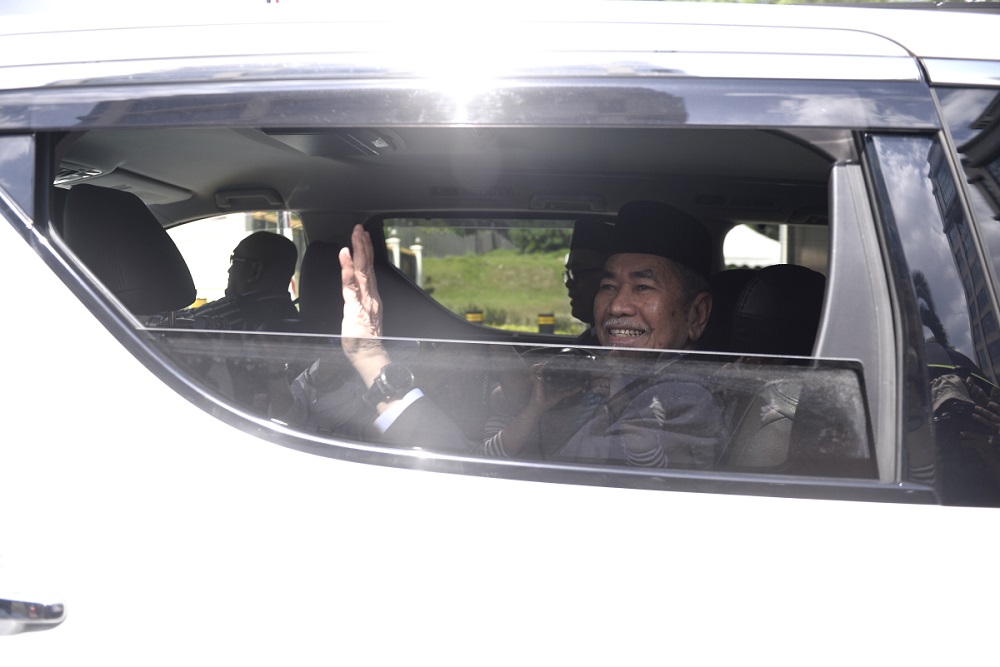 Meanwhile, Petra Jaya MP Datuk Seri Fadillah Yusof said there was no detailed discussion held during the three-minute meeting, and he was only asked to sign a provided form.

“I just followed the procedure. Each of us was allocated between two and three minutes for the interview. No (discussion), just a form for us to sign,” he said.

Air Hitam MP Datuk Seri Dr Wee Ka Siong told members of the media that he would respect any decision made by His Majesty. 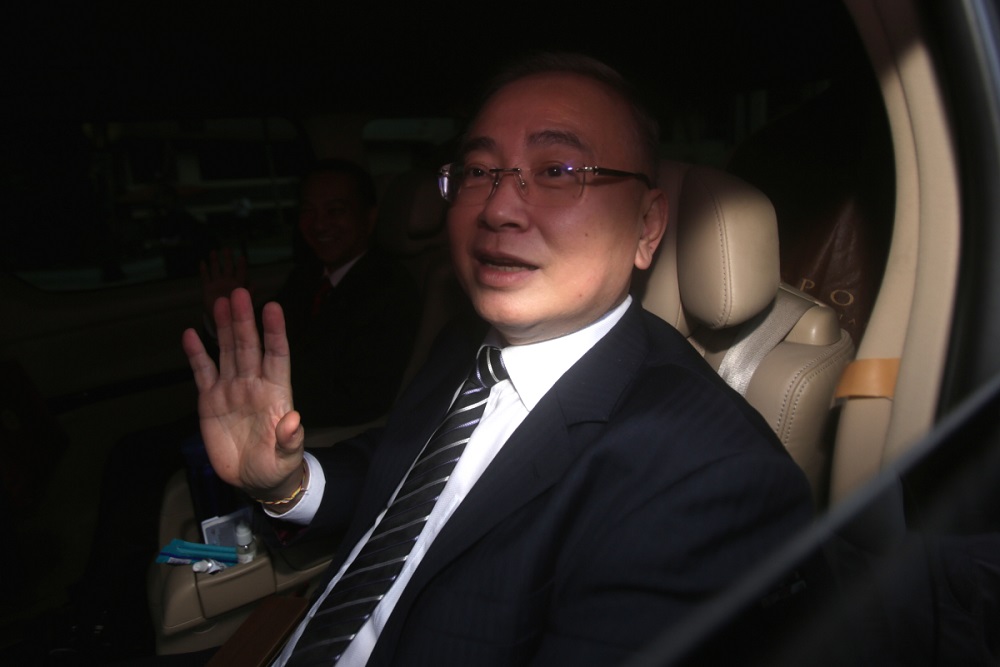 Media personnel has been camping in front of the Istana Negara entrances after Tun Dr Mahathir Mohammad announced his resignation as prime minister yesterday. He was later appointed as interim prime minister. 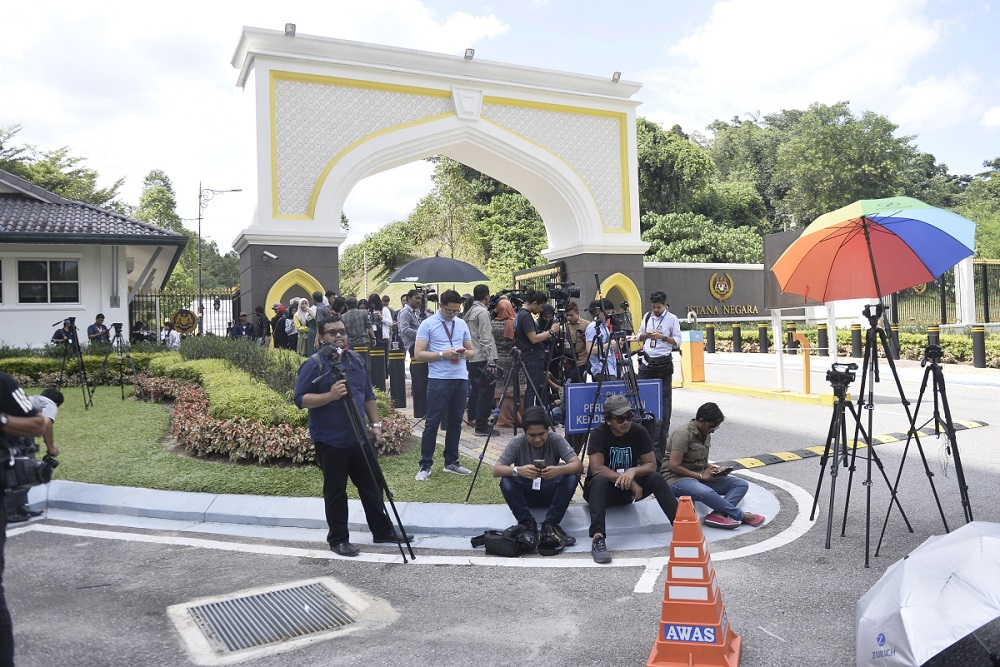 Members of the media gather in front of the Istana Negara to wait for the arrival of Barisan National and PAS MPs, in Kuala Lumpur February 25, 2020. — Picture by Miera Zulyana

The Istana Negara Gate 2 became the focal point for some 50 media personnel to gather the latest development on the country’s political situation from MPs who were seen leaving the palace.

Mohd Zuki was seen leaving the palace at 6.26 pm before the gates were closed, indicating the first interview session was over, four hours after it began.

Earlier in the day, Comptroller of the Royal Household for Istana Negara Datuk Ahmad Fadil Shamsuddin said the brief interview between two to three minutes each is to get feedback from MPs on the country’s current political situation. — Bernama