KUALA LUMPUR, Oct 18 — As academics and economists continue to warn policymakers of an imminent housing crisis should they fail to address the grave mismatch in supply-and-demand in affordable housing, complaints persist that the entire housing industry has yet to respond to accordingly.

Private developers continue to focus on building homes most Malaysians can’t afford; last month the Real Estate and Housing Developers’ Association Malaysia (Rehda) showed close to half (49 per cent) of their new launches for 2016 were those priced above RM500,000 compared to 37 per cent of launches in the affordable segment (RM250,000 to RM450,000).

While 14 per cent of the new launches may have been of units priced RM200,000 and below, these are actually low cost housing, reserved only for low income earners.

This has been more or less the situation for the past 10 years, the period where the compounded annual growth rate of house prices jumped by almost 300 times to 10.1 per cent from an average of just 3.1 per cent in the previous decade.

Last year, Khazanah Research Institute (KRI) in a report critical of developers noted that house prices in Malaysia are considered to be “seriously unaffordable”, with a median house price of more than four times the median annual household income, and more than five times for major cities like Kuala Lumpur and Penang. Much of it was due to the lack of adequate supply of houses.

So why do developers continue to favour upscale launches despite knowing well that only the top 20 per cent can actually afford to buy houses priced RM500,000 and above? Rehda’s reply was that increasing costs made the affordable segment — the RM200,000 to RM400,000 — financially unviable and unprofitable for developers. 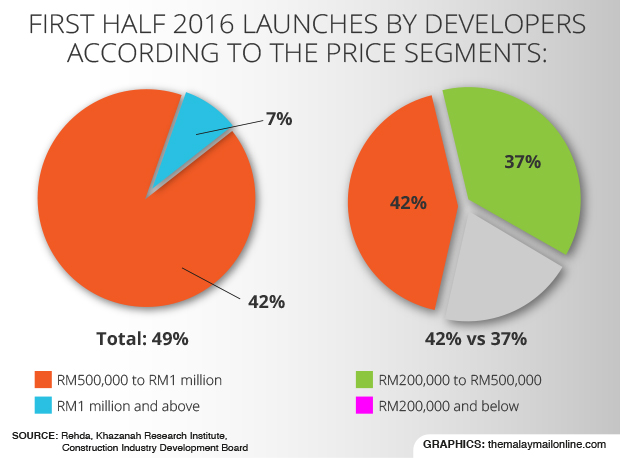 But how far is this assertion true? Looking at Kuala Lumpur and Selangor where costs of building materials and labour have not seen any significant increase since 2008. Data provided by the Construction Industry Development Board (CIDB) showed that prices of building materials like cement, steel and sand experienced fluctuations, but at a horizontal rate.

What’s more interesting is the differentials in construction material prices vary little even across highly industrialised states like Selangor and Penang to agricultural states like Kelantan or Pahang, yet the house prices in the former location averaged at RM350,000, while it’s only half the price in the latter areas.

The same could be said about labour costs. Bar a sudden spike in 2011, prices of construction costs have more or less dropped to 2008 levels since.

To understand why the housing market is where it’s at today would require deeper scrutiny of the entire housing industry and the construction ecosystem, beginning with the understanding of how house prices are determined.

In KRI’s 2015 “Making Housing Affordable” report, it was noted that house prices today are ultimately determined by the number of existing stocks of houses. If demand for houses outweighed that of supply, naturally prices shoot up.

As borrowing was made easy by the inflow of “hot money” from the US into emerging economies after the financial market crashed in 2008, speculators — thanks to the lack of regulation — exploited the opportunity to snap up properties often in huge numbers and hoarded them to artificially deplete supply and inflate the price.

Once the price goes up, they would “flip” the property to make a profit.

DAP federal lawmaker for Kluang Liew Chin Tong, at a housing forum last week, made it a point to emphasise the need to study if there was a link between house price inflation and the lending policy at the time. “I think there is a need to see if there was a correlation between the quantitative easing measures... and house price increase in 2008. We must learn from it to avoid it in the future,” the Kluang Member of Parliament said.

Riding on the boom, developers priced new launches based on the inflated prices of existing house stocks, not based on real value, KRI noted in its report.

The slow nature of property development in this country, due to their continued reliance on traditional construction methods, also enabled developers to leverage on the lack of supply and jack prices up. KRI noted that for every 100,000 new launches, 200,000 of the old stocks were sold.

Modernisation has been a longstanding thorny issue for the housing industry. The government wants developers to invest in technologies that can make house construction quick, but property companies claim the technology is costly.

Using traditional methods, developers take three to four years on average to deliver the houses. Under the 11th Malaysian Plan, the government projected that at least 130,000 affordable houses are needed yearly, yet only an average of 60,000 residential units were launched in the past five years.

The continued reliance on traditional methods of construction by developers has prompted accusations that the refusal to modernise is intentional since a slow construction period helps keep house prices high.

KRI research director Suraya Ismail, the author of the think tank’s report, speaking to Malay Mail Online said it’s hard to pin down if developers are deliberately keeping construction slow, but argued that there is no reason for them not to modernise.

“They have not invested in technology. Most developers take two years construction period (excluding orders and delivery) and what not...  I would say that the developers have been in this style of production for the past 60-70 years.

“However, we do work in a globalised environment you look at other developers from China, Singapore they now go for high-tech construction — they can build buildings in six months,” she said.

Land cost is also a crucial factor affecting price, developers have claimed in the past. During Rehda’s 2H 2016 survey report released last month, the group’s chief Datuk Seri FD Iskandar said land cost also made it expensive to develop affordable housing, which explains why only 35 per cent of new launches in 2016 were of the RM250,000 to RM400,000 category.

There is some truth to it. Time taken to give land conversion approvals by state governments also contributes to overall costs. A development plan could take up to six months for approval. However, KRI noted in its report that it is the developers themselves who caused land prices to inflate by bidding for new land according to the inflated prices of existing house stocks:

“If prices of existing houses continue to rise due to increase in demand, then this will lead to higher land prices and a vicious cycle of ever-increasing prices,” the report read. And most of these new houses are actually built on land banks already owned and bought by developers even before house prices escalated, Suraya noted. 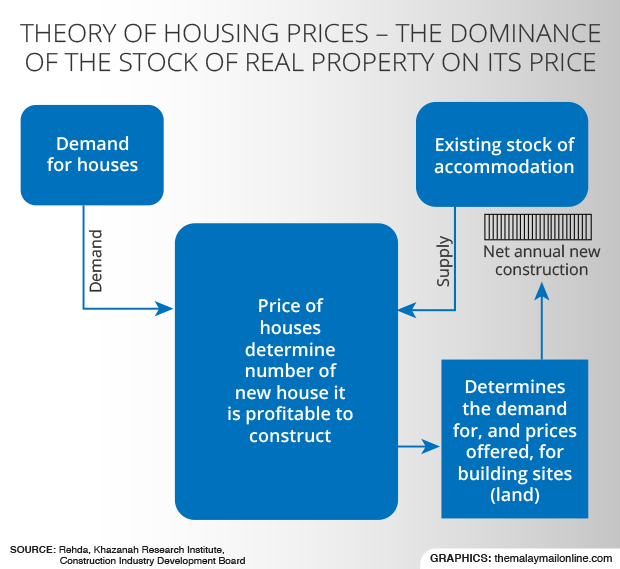 “You have already gotten the land. A lot of developers own huge land banks they can build RM300,000 houses if they wanted to,” she told Malay Mail Online.

Developers rely on “land banking” to ensure they have a steady supply of land for future developments. This means they would buy a huge plot of land lump sum and keep it for future projects. It is also a way to hedge against inflation.

According to property blog Bursa King, the top five developers in Malaysia have land banks with a gross development value of RM80 billion.

How developers were able to attain huge land banks is a question that is yet to be answered, said Bukit Gasing state assemblyman Rajiv Rishyakaran, a DAP leader vocal about affordable housing in Selangor.

It is also in the state’s interest to profit from the premium paid for these lands. State government gets 15 per cent premium from commercial conversion of land.

But the pressing issue is that huge private ownership of land means it would be difficult to push for more affordable housing, even by state enterprises.

While Selangor’s Rumah Selangorku affordable housing project may be able to cater to some of the housing demand using existing state land, it’s not sustainable in the long run without roping in the private sector.

There are also concerns that the intervention policies designed by the federal and state governments could worsen the situation instead of solving it.

Instead of regulating house prices, an idea proposed by KRI and the Home Buyers Association, interventions are mostly focused on easing borrowing or subsidising purchases of overvalued homes.

Malaysia has one of the highest household debt in the world today, with more than half of that for housing loans.

Another favoured method is intensifying public-private-partnership projects like the 1 Malaysia Housing Project (PR1MA) and Rumah Selangorku. The irony is despite the repeated push for modernisation, these projects are still undertaken through the costly traditional methods, which would be taxing on government revenue in the long run, Suraya pointed out.

“You can’t have your cake and eat it too. Can’t use conventional methods. You’re asking the private sector to innovate but they're not. So what's the point of having these partnerships? Not as if they are going to give you savings in terms of production methods. So I don’t see the point of PPPs if the private sector remains inefficient,” she said.