Netflix hit ‘The Queen’s Gambit’ spurs some Malaysian parents to teach children chess, sign them up for lessons

Ng (right) guiding his daughters on the basic strategies of chess. — Picture courtesy of Ng Hong Haw
Follow us on Instagram, subscribe to our Telegram channel and browser alerts for the latest news you need to know.
By ANNE GRACE SAVITHA

PETALING JAYA, Jan 18 — Who would have thought that an American series featuring a young girl’s love for chess would end up being a hit and get parents to send their children for classes?

But this has proven true for Netflix series The Queen’s Gambit which has seen many curious to learn the game while chess academies have been receiving an increased number of students amid the Covid-19 pandemic.

Set in the 1950 to 1960s, the series is an inspiring tale about Beth Harmon who becomes the greatest chess player after overcoming her own trials and tribulations.

Many viewers, especially parents, have been inspired by Harmon’s determination to win at every tournament, her chess tactics and how she braces herself to face her male counterparts in a male-dominated world.

Former Malaysian chess player and father of two daughters, Ng Hong Haw has been teaching his daughters, aged four and five, chess after being motivated by Harmon’s skills from the series.

“Harmon’s simple curiosity in the first episode is the one that is still etched in mind as it proved to be her greatest strength.

“The series also reignited my suppressed passion for the game as I have been teaching my daughters the fundamentals of the game for the past three months after they insisted that I teach them.”

Ng, who was a state chess player during his undergraduate days, told Malay Mail that since his daughters were young, it was important for him to first teach them the basics of the game.

“A chess game consists of openings, middle game and end game and each has their specific functions. In the earlier episodes of the series, basic strategies were employed and I too have shared one of the strategies which is to control the centre and develop the pieces early on.

“Once the fundamental is established, the others are a deeper level skillset to be developed if they are interested to delve deeper in the game.”

Asked as to how he felt about Harmon in a man-dominated world, Ng said that the tenacity shown by her was what he hoped his daughters would learn — to have the courage to take on the world.

“It doesn’t matter whether in the end they become very good players or play for the curiosity of the game, the essence of strategic learning and having the courage to play is more important.”

Ng said that while he has the privilege to train his daughters in the game due to his chess skills, there needs to be a balance between parents teaching and sending their children for classes.

“If the parent is a strong chess player while training their kids, there needs to be the realisation that this may kill off the child’s interest especially when the parent keeps winning the matches.

“That is when parents can opt to send their children for professional training or classes.”

Chess academies too have been getting more students although many academies have been going online due to the Covid-19 pandemic.

Brainbox Chess Academy located in Kuala Lumpur has recorded an increase of 50 per cent in new student enrolment especially in October last year — the same time when The Queen’s Gambit was gaining popularity.

One of its professional chess coaches and chess player Teh Wee Zhun told Malay Mail that the Covid-19 pandemic and the popularity of the American series have led to many parents sending their children for online chess lessons.

“For our chess academy, we have been going online since last year with online applications like Chess.com that comes with a digitalised chess board complete with 64 squares and pieces.

“Not just that, the coaches too are able to type in strategies via Zoom through the site’s chat box and to help provide information as to where the students should move. 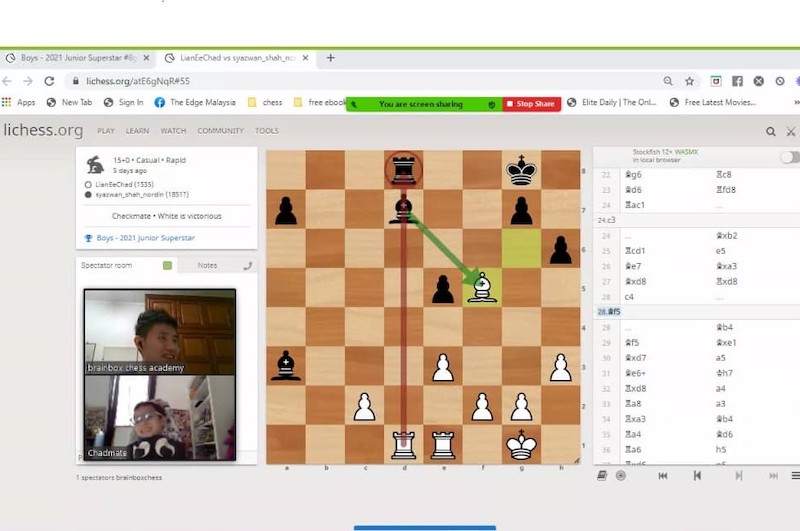 Teh Wee Zhun guiding his students using online applications such as Lichess and with arrows on the online chess board. — Picture courtesy of Teh Wee Zhun

He said that most professional chess players have the online application downloaded in their handphones so that they can compete against players from across the world.

“As compared to The Queen’s Gambit where Harmon travelled for her physical competitions, many professional players today choose to play online as they can play with any players who are on their same level.

“Plus it’s also convenient for them as all they need to do is have their handphones with them and students can also review their games as all their matches are saved online.”

Online classes for the time being

Putrajaya Chess Association president and Traju Chess Centre owner Muhammad Firdaus Ismail told Malay Mail that The Queen’s Gambit was one of the most influential fictional chess series because of it mimicked the essence of chess competitions, and strategies used.

Muhammad Firdaus, a professional coach at the centre also said there was an increase in student enrolment last November and December because of the popularity of the series.

“When I was able to reopen my centre during the conditional movement control order last year, there were about 30 new students and I believe that parents were inspired to send their children to my academy because of the series.

“But with the recent movement control order (MCO) I have shifted my classes online and parents too want to continue to provide a substantial chess environment for their loved ones and to keep their children focused in the game.”

He said that he missed his physical classes with his students as the feel was different, and students were unable to meet their friends and compete with each other after classes.

Muhammad Firdaus said that while he misses having his students around for physical classes, the best he can do is to instill have during his online classes. — Picture courtesy of Muhammad Firdaus Ismail

“There is also the issue of cheating that can happen when students are online as compared to when they are in a physical class.

“I would also need to switch between many applications such as Zoom and then surf over to online chess server Lichess for their matches — it can be a daunting task at times.

“But what I can do for the time being is to utilise the different online platforms available so that students would be able to focus and still have amid the (MCO).