For a moment after hearing my brother had lost the appeal it was like my own life was cut short. However, losing the court case does not mean that there is no hope. This is a serious miscarriage of justice. As Pannir Selvam’s sister, I have a valid claim to appeal to the courts and judiciary system of Singapore to re-evaluate the Central Narcotics Bureau’s (CNB) decision to not issue Pannir with the Certificate of Substantive Assistance.

The Court of Appeal mentioned that the information Pannir disclosed was not used by the Central Narcotics Bureau (CNB). How far can we trust the CNB when all they want to do is to hang inmates without assisting them in their cases and in seeking justice?

First, I would like to point out that Zamri was arrested in October 2014, this is right after Pannir was arrested in September 2014. Zamri is a Singaporean who was caught in Clementi West Street 1 inside Singapore. What was the CNB doing before September 2014? Why was Zamri caught ONLY AFTER Pannir’s arrest then?

The CNB told the courts that they had the information on Zamri early on. As such, we would ask, why wasn’t he caught earlier, before Pannir was? I urge the CNB to be more transparent on how they caught Zamri and we want the prison and judiciary system to bring Zamri and Pannir to the courts for a hearing, along with the CNB.

I would like to humbly remind Singapore’s Senior State Counsel, Mr. Francis Ng, about his statement of Pannir failing to identify the photographs. How can a drug mule who was trapped and set to be caught, be able to identify the person he is supposed to send a parcel to?

Please do not mistake me here, as I would like to put the question back to you, sir. If you or I were set up to be caught with drugs by the authorities, then could we identify who we were going to courier or deliver the parcel to? We will only know the address or other details, but not very much on the face or the exact person you would be delivering it to.

It goes without saying that Pannir did not recognize Zamri’s face as they are not friends and acquaintances. However, the information that Pannir gave to CNB, which were:

All this information would have been a great assistance to the CNB which had led to Zamri’s arrest. 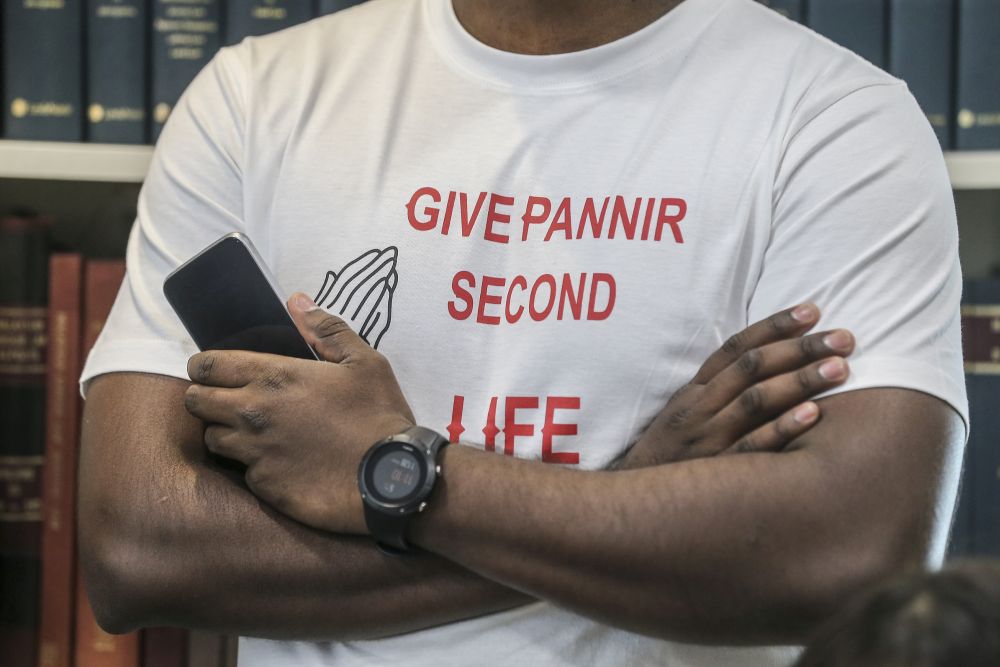 A family member is pictured wearing a t-shirt in support of Singapore death row inmate P. Pannir Selvam during a press conference in Petaling Jaya July 5, 2019. — Picture by Firdaus Latif

I strongly believe that information provided by Pannir must have been used by the CNB in some way. To give even more context, the term “used” here clearly has happened as Zamri was arrested by CNB with the information given by Pannir.

Pannir happened to meet Zamri inside Changi Prison. Zamri ended up on death row as well.

Pannir got to find out from Zamri that a CNB officer told him that his arrest was due to information provided by “an Indian guy” who was arrested one month ago, which could undeniably be none other than Pannir.

There are other questions that I would like to bring up. If the CNB is claiming that they did not use Pannir’s information, then why did the prison refuse to allow Pannir lawyers to interview or meet Zamri in prison at first? What is there for the prison to deny permission to Pannir’s lawyer to meet Zamri and talk to him? After several letters and an affidavit filed by Pannir’s lawyer, Mr Too Xing, he finally got the permission to meet Zamri and Zamri has affirmed an affidavit supporting Pannir.

My dear Malaysians, talking about the permissions, I can’t even digest the incident that happened on the 22nd of May 2019, when the Changi Prison refused to give permission to Pannir’s 2nd lawyer Mr. N.Surendran for a visitation. And this happened when Pannir was about to be brought to the courts for the final time to get his official sentence. Can any of you imagine this moment? Mr. N. Surendran did not get permission to visit Pannir until the end and he was only able to see Pannir in the court on the 23rd of May 2019, a day before his scheduled execution. This is ridiculous.

I again would like to respectfully remind Singapore to respect human lives and to embody humanitarian values by upholding the penitentiary and judicial standards of a 1st-world country. Please do not carry out any hanky-panky job behind the scenes like denying death row inmates their rights to seek and meet legal counsel and refusing to cooporate with lawyers that are arguing for death penalty cases in Singapore.

This judicial review against the public prosecutor’s failure to issue a certificate of substantive assistance has been reevaluated. This is because the officer that took the statement during Pannir arrest in September 2014 acted in bad faith as he did not explain to Pannir that if he cooperated with CNB, Pannir would receive a certificate of substantive assistance. I would like to bring to the attention of the courts to listen back to the oral recordings done while Pannir’s statement was being taken on the 3rd of September 2014. The CNB officer intentionally did not explain about the Certificate of Substantive Assistance which is part of the procedure when taking statements for such cases. Instead, he repeatedly insisted to my brother to tell him all the information he knows.

Cruelty and judicial standards were not only broken in Pannir’s case. Mentally challenged Malaysian, Nagentiren’s court hearing has been postponed from 30th Nov to next year January Considering his illness, mental faculty and the support received from all over the world, I plead to Singapore to stop his execution and to put him on parole. Singapore has already wasted his time and life by putting him on the condemned death row instead of sending him to a mental disability care center to get treatment. Wanting to hang him to death, despite knowing all this, is a serious humiliation for Singapore. He must be treated like a patient but not as a convict. He did not kill or harm anyone, so please, please do not hang him to death.

I understand that not being a lawyer is not an excuse for not following the court procedures.

However, if this miscarriage of justice takes place, as a responsible sister I have to do everything possible to save my brother’s life. This includes highlighting what had really happened.

There are thousands of people on death row in Malaysia and Singapore and it’s time to open our eyes and ears to their plights and sorrows. My dear Malaysians and Singaporeans, please help us to save Nagenthiren, and my brother Pannir Selvam and ensure that he gets the justice he deserves.