SINGAPORE, Sept 5 — Antiretroviral drugs used for the treatment of patients infected with the human immunodeficiency virus (HIV) are now subsidised by the Ministry of Health (MOH). The move, which comes after years of advocacy by non-profit groups, is applauded by the medical community.

In response to queries from TODAY, MOH revealed that from Tuesday (Sept 1), 16 antiretroviral drugs have been added to the list of subsidised drugs, under two of its schemes known as the Standard Drug List and the Medication Assistance Fund, a fund to help patients pay for expensive drugs used for specific medical conditions.

This means that all subsidised patients living with HIV will now receive either a 50 per cent or 75 per cent subsidy, depending on their means-test status, when they buy any of the 16 drugs on the list.

Before this inclusion, HIV patients may have received help from the Medication Assistance Fund on a case-by-case basis for the cost of their treatments.

A spokesperson from MOH said that the ministry regularly reviews the subsidised standard and non-standard drugs to ensure that they remain relevant to changes in population needs, medical practice and evidence on clinical and cost effectiveness.

The inclusion of the 16 HIV drugs was part of this regular review.

Ajmal Khan, 30, who has been living with HIV since 2010, said that the move would not impact him much financially because he has been able to get subsidies through means-testing. This is a set of tests that government agencies use to see if someone applying for financial aid meets the criteria, such as their income and annual value of their homes.

His case had to be reviewed with a social worker in order to be eligible for the subsidies. Being put on the list of subsidised drugs means that anyone seeking treatment at public health institutions would have access to it.

The marketing professional said that this move by MOH is symbolic in terms of recognition of all the work that advocacy groups and medical practitioners have put in all these years.

“Now, there is no more discrimination for HIV (treatments),” he said.

Action for Aids (AFA), a non-profit organisation, said in a media statement that it is “particularly heartened” by this move as it has “long championed” the need for antiretroviral therapy to be subsidised and made affordable for all persons living with HIV.

“International and local experience have shown that antiretroviral therapies are the most important clinical intervention for improving longevity and preventing opportunistic infections, which in turn leads to people living with HIV leading full and productive lives,” it added.

By taking these drugs and with regular medical follow-up, AFA said that those undergoing treatment can reach undetectable levels of viral load. This negates the possibility of transmitting the virus to their partners.

Dr Wong Chen Seong, deputy director of the national HIV programme at the National Centre for Infectious Diseases, said that the significance of this move cannot be overstated.

Access to effective HIV treatment is essential for patients to get an undetectable viral load, which forms the basis for their personal health and well-being, allowing them to remain healthy and enjoy normal life expectancies, he said.

“Just as important, having access to treatment and achieving an undetectable HIV viral load also prevents onward transmission to others This will be invaluable in reducing the fear surrounding HIV, and the stigma and discrimination still faced by many people living with HIV,” Dr Wong said.

Dr Leong Hoe Nam, an infectious diseases specialist at Mount Elizabeth Novena Hospital, said there was a perception in the past that offering HIV medication at a subsidised rate would encourage promiscuity.

Praising MOH for being forward-thinking, Dr Leong said that this move would prevent an avalanche of new HIV cases as it has been shown that treatment is a very effective way of preventing HIV.

Dr Tan Kok Kuan of the medical chain Dr Tan and Partners said that the community of healthcare workers involved in HIV testing and care have been eagerly anticipating that the Singapore government would make this move.

Besides improving accessibility to HIV care and leading more people to start and stay on treatment, Dr Tan said that those seeking care at public health institutions will fall into the “same workflow” as any other patient there for other chronic diseases.

“This will lead to people living with HIV feeling less singled out and targeted or labelled as ‘different’,” he said.

Dr Chia Shi-Lu, the former chair of the Government Parliamentary Committee for Health, said that HIV patients, regardless of financial background, no longer need to go through means-testing to qualify for subsidies.

“It restores dignity to those who need these drugs,” he said.

Another positive outcome from this move, Dr Leong from Mount Elizabeth Novena Hospital said, is that the medication supply for HIV drugs will face fewer disruptions.

As people who have HIV have been getting their medication overseas, mainly Thailand, due to the lower costs, Dr Leong said that their supplies have been disrupted due to Covid-19, or occasionally in the past when Bangkok floods.

“This unfairly affects HIV patients with unnecessary stress,” he said.

Here is the list of 16 HIV drugs that are now subsidised. — TODAY 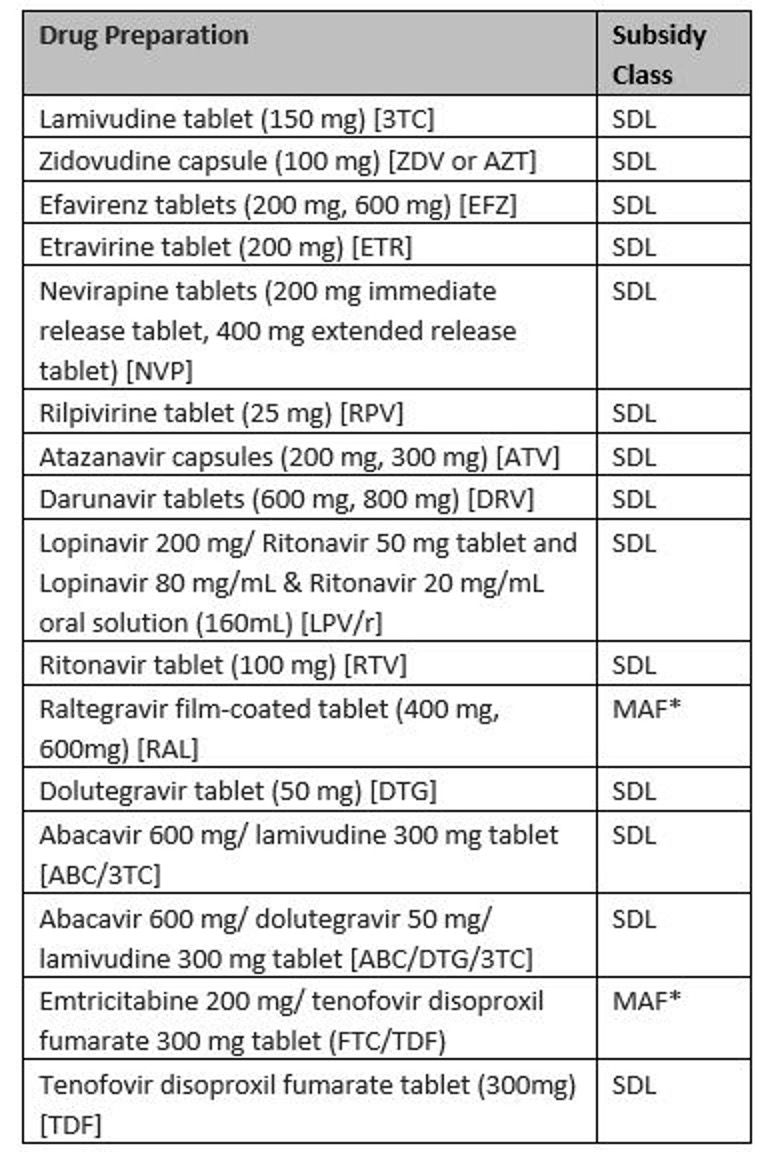