Muda president Syed Saddiq Syed Abdul Rahman arrives at the Kuala Lumpur High Court December 14, 2021. — Picture by Miera Zulyana
Follow us on Instagram, subscribe to our Telegram channel and browser alerts for the latest news you need to know.
By IDA LIM

On Twitter, the youth-based party announced that the High Court had ruled in its favour, and that the government was also made to pay legal costs of RM10,000.

This morning was the hearing of Muda’s lawsuit via 13 of its co-founders against both the home minister and the Registrar of Societies (RoS).

In the press conference that was streamed live via Muda’s Facebook page, Muda’s lawyer and pro-tem vice-president Lim Wei Jiet confirmed the High Court’s order for the home minister to register Muda as a political party within 14 days.

Later when contacted by Malay Mail, Lim said that the judge granted two of the court orders that Muda sought in this lawsuit, but did not give oral reasons for the decision.

The two court orders granted today was a certiorari order to quash or cancel the home minister’s decision through an email and letter dated August 12 that rejected Muda’s appeal against the RoS’ decision to reject Muda’s application to be registered as a political party, as well as a mandamus order to compel the home minister and the RoS to register Muda as a political party within 14 days from the date of the court order.

“We believe the court allowed the judicial review because the minister's reason for rejecting Muda's registration based on national security grounds was unsubstantiated.

“We are reminded today of why it is important for our public institutions - in this case, the Judiciary - to be independent, for they are often the last bastion to uphold democracy and constitutional rights when the Executive and Legislative are against you.

“We hope the government will not appeal this matter, and allow people the choice to vote for Muda in elections, or otherwise,” he told Malay Mail. 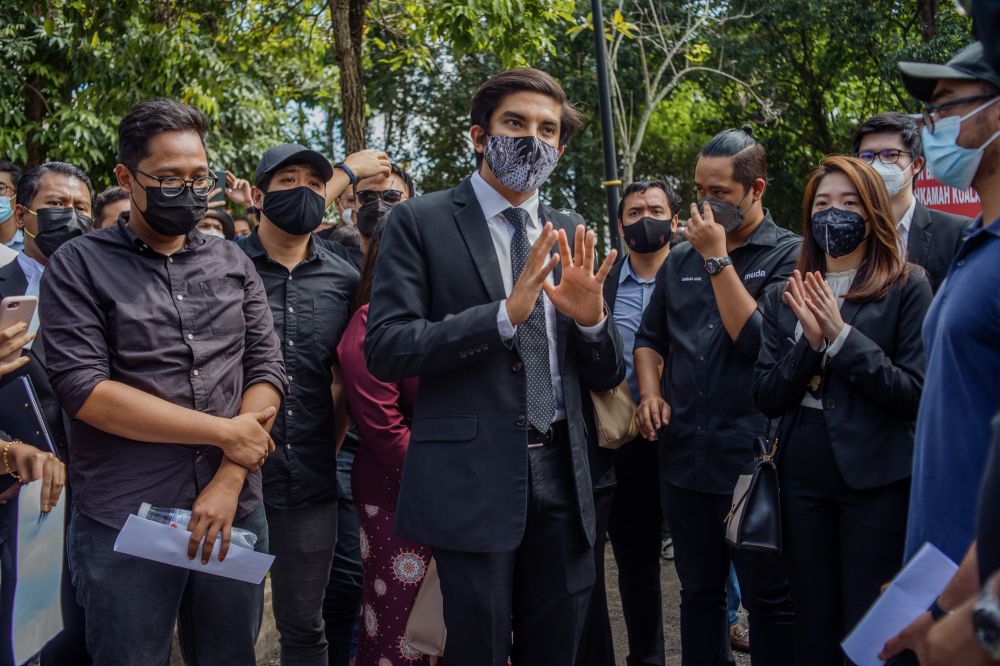 In the press conference by Muda, pro-tem president Syed Saddiq Abdul Rahman lauded the High Court’s decision today as having made the struggles by the party worthwhile.

“Today is a day filled with emotions, happiness, sadness too, as this year is a year filled with obstacles and challenges. But through this decision — the bastion of democracy, the institution of the judiciary itself which is respected — and Muda truly thanks the country’s judiciary as the victory today is honestly not just in our favour alone but in the favour of the country’s democratic system. Because finally we have a place to voice our opinions, criticisms and proposals for us to develop our beloved country,” he said.

“For the past year and a half, we went through various obstacles and challenges, prosecutions, threats, sogokan (bribing), it is unbelievable, but with today’s decision, it makes everything meaningful and worth it,” he said.

Syed Saddiq noted that Muda was founded by young teachers, activists, lawyers, doctors, farmers, and those working in companies, noting that they may not have vast political experience or funds or cushy government posts, but that they have the will to make Malaysia a developed nation and is not out to destroy the nation.

He said Muda is not out to burn bridges but intends to build bridges, and that it wants to strengthen the politics of service to ensure the poor and the youths would not be sidelined from the country’s democratic system.

He also said Muda’s priority was to make Malaysia a developed country run with dignity and integrity, and which represents all Malaysians — the young, old, poor, rich and regardless of political affiliation — as their fate and future is interconnected.

“We want to build a developed nation, with dignity, integrity, good education system, quality jobs, income gap should be lowered, climate justice. We want a fair and just Malaysia, we are not here to kill our political enemies, we are not here to burn bridges, we are here to serve and serve all Malaysians,” he said, adding that the “battle and journey has just begun” for Muda.

“It is true we don’t have money, experience, power, positions like many others out there, but we do have a pure and clean heart. We are here because we want to serve, not because we want posts, powers and positions,” he said as he turned to address Muda members who were present outside the court complex.

He also urged for Muda members to help out those who are poor as if they were their own families without regard for race, religion or political affiliation, saying: “Because in the end we are only stronger together as one country. Our journey starts today, and we will prove to citizens in Malaysia that we are here to work for you.”

Later in a Facebook post, Syed Saddiq said Muda was obstructed and blocked from being a political party which would have been able to contest in elections under its own flag and were not allowed to validly register its members, and had to trudge to RoS and to court repeatedly to seek to be registered as a party.

“I myself was labelled as an independent Member of Parliament in the Dewan Rakyat,” he wrote, adding however that Muda now has more than 50,000 members after starting with just 30 individuals.

The former youth and sports minister also labelled today as a historic day for Muda as the court has now decided that the home minister has to register it as a political party within 14 days. Syed Saddiq labelled today as a historic day for Muda as the court has now decided that the home minister has to register it as a political party within 14 days. ― Picture by Shafwan Zaidon

Today’s court victory is a hard-fought win for Muda, as this is the third lawsuit it had to file in order to be registered as a political party.

Muda had on September 17, 2020 wrote to the RoS to apply to be registered as a political party, and had on December 21, 2020 issued a letter of demand to the RoS after waiting for more than three months for the latter to decide on the registration application.

Muda was preparing to file a lawsuit against the RoS when the latter finally decided on January 6, 2021 to reject the party’s application for registration as a political party.

On January 12, 2021, Muda’s 13 co-founders filed its first lawsuit ― through a judicial review application ― against the home minister and RoS to challenge the registration rejection, and sought for court orders to be registered as a political party and to seek compensation.

The first lawsuit did not proceed further after the High Court’s February 4, 2021 dismissed Muda’s application for leave for the judicial review to be heard, as the court held that Muda had yet to exhaust the available remedy under the Societies Act’s Section 18 to appeal to the home minister against the RoS’ rejection.

Following the High Court’s February 4 decision, Muda had immediately on the same day filed an appeal to the home minister against the RoS’ January 6 decision to reject its application for registration as a political party.

Muda later took steps within February to comply with additional requests by RoS.

After an 81-day wait or waiting for more than two months for the home minister to decide on the appeal filed in February, Muda on April 26 then filed its second lawsuit.

Just five minutes before the August 12 court hearing started for Muda’s second lawsuit, the home minister finally told Muda of his decision to reject its appeal against RoS’ refusal to register the party.

By the time the home minister’s decision was given, it had already been 189 days since Muda appealed.

Muda on August 18 then withdrew its second lawsuit since it had become academic with the home minister finally giving his decision.

On August 25, Muda then filed its third lawsuit to seek to compel the home minister and RoS to register it as a political party. This is the court case that the party won today.