Ismail Sabri: 11 sectors given pre-approval to operate during Phase Two of recovery plan

KUALA LUMPUR, June 27 — The government has announced a list of pre-approved sectors allowed to operate when the country eventually transitions to Phase Two of the National Recovery Plan (NRP) following the indefinite extension of the current phase until it has met the threshold set.

Senior Minister (Security Cluster) Datuk Seri Ismail Sabri Yaakob said a total of 11 sectors — manufacturing and commercial — will be allowed to operate alongside essential sectors approved by the National Security Council from 8am to 8pm.

The six pre-approved sectors under the manufacturing category included automotive (vehicle/components), ceramic, rubber, cement, steel and iron and furniture (for the purpose of exportation/).

“Based on risk assessments performed by the Health Ministry, the government will maintain the first phase of the NRP nationwide as announced by the Prime Minister earlier today.

“This is taking into account the current situation whereby we have yet to successfully transition from Phase One to Phase Two where our daily positive cases graph shows a horizontal trend,” he said in a statement here.

Earlier today, Prime Minister Tan Sri Muhyiddin Yassin said the first phase of the NRP due to expire tomorrow will be extended as the country’s Covid-19 infection numbers have not met the threshold set.

Malaysia would not be able to exit Phase One until all three NRP indicators — new cases below 4,000 daily, “moderate” demand on intensive care capacity, and 10 per cent vaccination in the country — have been met.

The country recorded 5,586 new Covid-19 cases today, still far from the threshold that would lift certain restrictions needed to get the economy back on the recovery path.

As for the standard operating procedures (SOP) for the respective phases, Ismail Sabri said interstate and interdistrict travel will be restricted with the exception of students and teachers traveling for the purpose of attending examinations under the second phase.

He also said travel exceptions under the second phase could be given to long-distance spouses for emergency purposes subject to the approval of the police.

Other relaxations allowed during the second phase included non-contact sports and recreational activities and revised operating hours for eateries as announced earlier today.

As for the third phase, Ismail Sabri all economic activities will be allowed to operate except three that are listed as high-risk sectors.

The three sectors were spa, pedicure and manicure and entertaining outlets such as pubs and nightclubs.

Travel restrictions will also be relaxed further under the third phase as traveling within one’s state for the purpose of tourism is allowed with the exception of interstate travel which will be prohibited.

This latest MCO dubbed MCO 3.0, or “total lockdown”, was implemented on June 1, after daily new Covid-19 cases soared past the 7,000 cases mark in late May.

It was then extended for another two weeks, from June 15 to June 28. 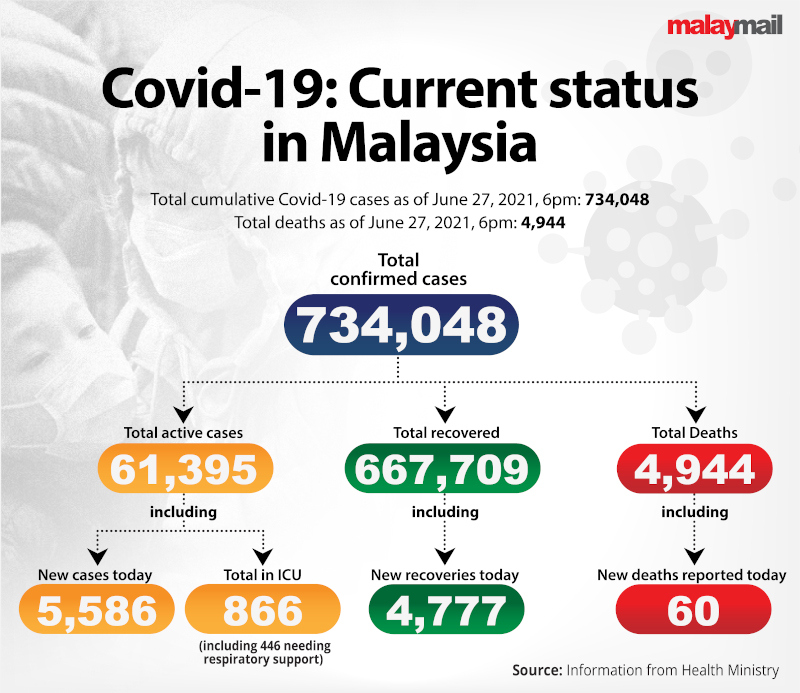