Based on court documents, the Malaysian government filed on January 8 a lawsuit against Loo Ai Swan — better known as Jasmine Loo, who was 1MDB’s general counsel or in-house lawyer — to claim RM2,496.133.05 in tax arrears.

All these notices were sent on November 18, 2020 to Loo’s last known address in Damansara Heights, Kuala Lumpur, but there has been no response.

As Loo failed to pay the tax claimed for the five years within 30 days of the delivery of the IRB notices, a further 10 per cent penalty was imposed for all those years, which resulted in the total amount she would need to pay coming up to the nearly RM2.5 million figure.

The Malaysian government is now claiming RM2,496.133.05, along with a five per cent interest per annum on the nearly RM2.5 million amount from the date of the court’s decision until the day it is paid.

After taking into account a surplus of credit of RM972 that was deducted to pay a part of the 2009 amount sought as well as after a 10 per cent increase in taxes claimed were added on due to Tang’s failure to pay the figures claimed from 2009 to 2017 within 30 days of the delivery of the notices, the total amount he now has to pay is RM6,779,852.36, with the government also seeking a five per cent interest per annum from the date of judgment.

If the taxes owed by both Loo and Tang were combined, it would be RM9.3 million of taxes that they have yet to pay the Malaysian government.

Bank Negara Malaysia had in July 2015 put out an alert for Loo and Tang but the duo reportedly did not show up, while then prime minister and then finance minister Datuk Seri Najib Razak had in an 2017 written parliamentary reply said the duo had been removed from BNM’s watch list as investigations on them had been completed and as 1MDB had paid a compound issued by 1MDB as a result of the probe.

A comparison of the identity card numbers in the two lawsuits against Loo and Tang were shown to be the same as a poster posted on Facebook in July 2018 by BNM. At that time, the central bank was searching for these two individuals to help in investigations.

On June 11, 2018, the Malaysian Anti-Corruption Commission (MACC) had also released a poster featuring four individuals wanted to assist in investigations of the 1MDB case, including Loo and Tang. The two others were Tan Kim Loong and Geh Choh Heng — otherwise known as Eric Tan and former 1MDB deputy chief financial officer Terence Geh — who were reportedly also close associates of Low.

By July 2018, news wire Bloomberg reported that arrest warrants had been issued for both Loo and Tang, as MACC was seeking for them.

Previously on January 15, the IRB had also via the Malaysian government filed a lawsuit to claim nearly RM68 million in unpaid taxes from 2010 to 2013 from Tan — otherwise known as Eric Tan or reportedly Low’s most trusted associate.

The four individuals — Loo, Tang, Tan and Geh — had all had criminal charges filed against them and Low in December 2018 in their absence in Malaysia over their roles in defrauding and collectively causing the government losses of US$1.17 billion (RM4.2 billion).

Malaysian police had also in December 2018 secured warrants to arrest all five who are said to have absconded from the country, and had said it would seek Interpol’s aid as well as that of related jurisdictions to detain these individuals. 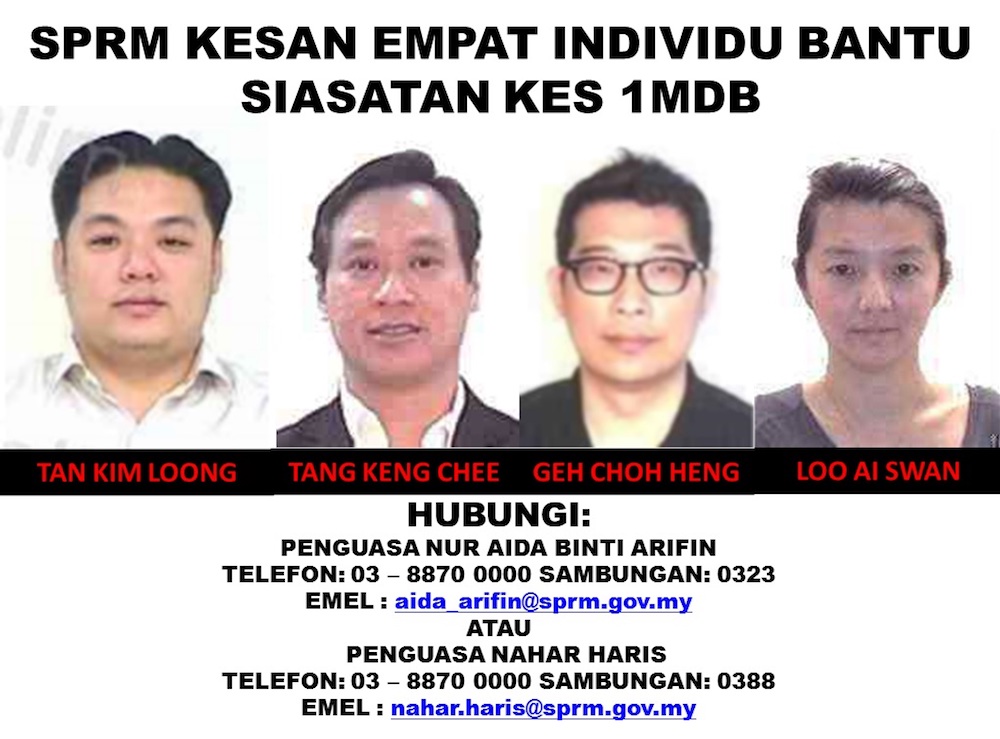 Do you know these four individuals? — Picture courtesy of MACC