NSC ends some EMCO, CMCO areas nationwide, while extensions for some goes on

Senior Minister (Security Cluster) Datuk Seri Ismail Sabri Yaakob at a daily press conference on the recovery movement control order (RMCO) at the Parliament House in Kuala Lumpur July 15, 2020. — Bernama pic
Follow us on Instagram, subscribe to our Telegram channel and browser alerts for the latest news you need to know.
By JERRY CHOONG

PUTRAJAYA, Nov 23 — The enhanced movement control order (EMCO) in several localities nationwide will be allowed to conclude, as the National Security Council (NSC) and the Health Ministry have determined the Covid-19 cases there have been sufficiently reduced.

“The EMCO began on October 28 and was extended to November 24. The ministry has since conducted 1,171 screenings with 174 positive cases recorded,” he said during his press conference today.

At present, only 43 positive cases were recorded in the locality within the 14-day period from November 8 until November 21.

“However, all residents in the locality are still bound to the standard operating procedures (SOP) of the conditional movement control order (CMCO) in effect across Sabah,” Ismail said.

Similarly, the EMCO in Plaza Hentian, Kajang will end tomorrow as well. Up until November 22, the ministry conducted 5,752 screenings in the locality and recorded 462 positive cases.

“As of now all screening samples have been obtained with no further samples awaiting confirmation. Again, all residents in the locality must comply with the CMCO’s SOPs in effect across Selangor.

“The EMCO in Medan 88, Salak Tinggi, will conclude on Wednesday (November 25) as scheduled. The ministry conducted 619 screenings and detected 56 positive cases in the locality, and based on this the Covid-19 situation there indicates a reduction trend with the situation under control,” he said.

The ministry has also conducted 246 targeted screenings in the Seremban prison and quarters in Negri Sembilan, detecting 25 positive cases.

“Due to this, the NSC has agreed to implement the EMCO in Seremban prison and quarters for a fortnight, starting tomorrow until December 7.

“The EMCO will cover the entire area of the prison, including the cell blocks, administrative buildings, officers and personnel quarters, which involves 2,080 residents,” Ismail said.

The minister also added that the NSC has decided to extend the orders in three more localities, the first being Kuching district in Sarawak.

“Earlier on, the CMCO was implemented from November 9 until November 22. At present, 1,055 Covid-19 positive cases have been recorded, with a remaining 58 still active and involving several clusters in the district.

“Per the ministry’s risk assessment and advice, the NSC has agreed to extend the CMCO in Kuching district until this Friday (November 27). However, if there are no additional cases and the situation is under control, then the CMCO can be ended at an earlier date,” he said.

Ismail said the EMCO at Kampung Sabah Baru in Lahad Datu, Sabah, will be extended by another fortnight starting tomorrow until December 7.

“As of November 15, 1,914 screenings have been carried out with 200 positive cases recorded in this locality. The extension will enable targeted screening by the ministry to curb the spread of Covid-19,” he said.

“The ministry also conducted a second screening today and is still awaiting those results. To this, the EMCO in the locality has been extended to next Monday (November 30) so the results can be obtained,” Ismail said. 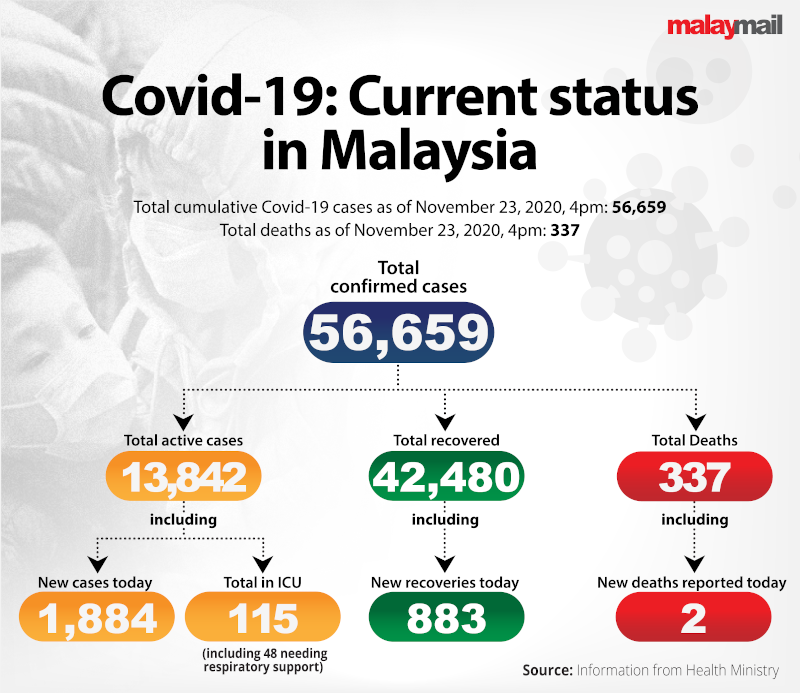