The Palace of Justice is shrouded in haze in Putrajaya on September 29, 2015. — Picture of Yusof Mat Isa
Follow us on Instagram, subscribe to our Telegram channel and browser alerts for the latest news you need to know.
By IDA LIM 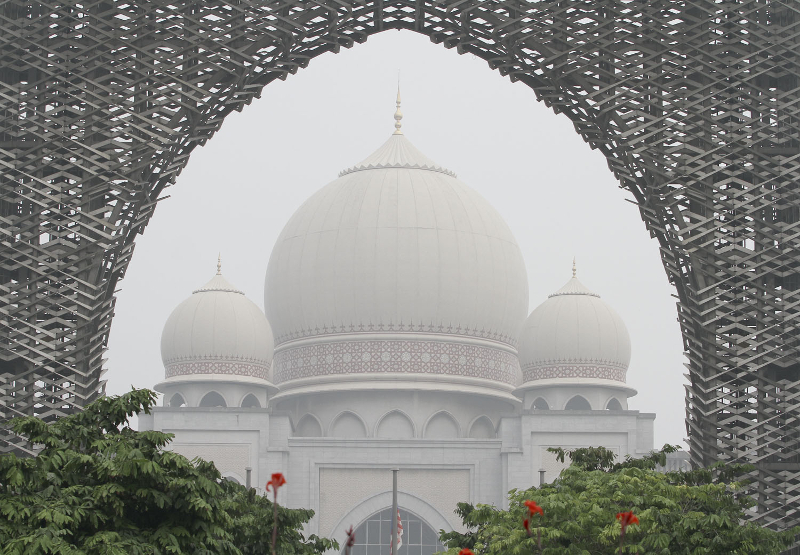 In a statement, the Federal Court’s Chief Registrar Office said the Malaysian judiciary remained committed to ensuring access to justice for all, noting that the Covid-19 pandemic has been a catalyst to the use of technology in the courts. — Picture of Yusof Mat Isa

KUALA LUMPUR, Nov 9 — The Federal Court today carried out online hearings via video-conferencing in a bid to ensure continued access to justice, amid the Covid-19 pandemic that has disrupted court cases.

In a statement, the Federal Court’s Chief Registrar Office said the Malaysian judiciary remained committed to ensuring access to justice for all, noting that the Covid-19 pandemic has been a catalyst to the use of technology in the courts.

“The Malaysian judiciary is always proactive and working to maximise the use of technology in adapting to the new normal to ensure the administration of justice is not halted just like that,” it said.

Noting recent changes to the law that have now enabled both civil and criminal court proceedings to be heard using live video links or electronic communication, the Chief Registrar’s Office went on to highlight the Federal Court’s trying out of online hearings today.

“All these panel judges were in the Open Court while lawyers were at their respective stations,” it said.

According to the Chief Registrar’s Office, a habeas corpus is an application for a court order to order for a person to be released from unlawful detention.

“The initiative to hear these habeas corpus cases is to ensure the right to individual freedom can be guaranteed by resolving appeal cases immediately despite the pandemic situation at this time,” the statement said.

The law referred by the Chief Registrar’s Office is Section 15A in the latest amendments to the Courts of Judicature Act 1964, which came in force on October 22.

Among the amendments in this law is the introduction of Section 15A, which said the court — namely the Federal Court, Court of Appeal, High Court — may in the interest of justice conduct the proceedings of any civil or criminal cause or matter through a remote communication technology.

Also as part of the amendments, “remote communication technology” was defined as a “live video link, a live television link or any other electronic means of communication”.

In the same statement, the Chief Registrar’s Office noted that the global Covid-19 pandemic has drastically impacted how work is carried out including court duties.

Due to the CMCO which had first been re-imposed in Selangor, Kuala Lumpur and Putrajaya on October 13, the hearing of both ongoing civil and criminal cases had been suspended until the end of the CMCO. The CMCO in these three areas was later extended to November 9, and further extended until December 6.

Despite the suspension of such court hearings in Terengganu, Negri Sembilan, Johor, Perak, Kedah, Penang, Melaka, Kuala Lumpur, Selangor and Putrajaya until December 6, the Malaysian judiciary had however said that certain cases can be heard via online hearing such as where all parties and the court agree for civil cases involving urgent hearing of interparte or ex parte matters.

Other court matters that the judiciary said can be heard online include cases at the Court of Appeal and Federal Court in the interests of access to justice, as well as interlocutory matters at the High Court or the delivery of judgments by the High Court.

Among the cases that have been disrupted so far due to the CMCO are the high-profile corruption trials in Kuala Lumpur of former prime minister Datuk Seri Najib Razak, his wife Datin Seri Rosmah Mansor and Umno president Datuk Seri Ahmad Zahid Hamidi, which all had previously scheduled hearing dates in October and November.