The six people who lost their lives to Covid-19 today ranged in age from 27 to 71. They were from Sabah and Labuan.

“All are Malaysians except for a 27-year-old man, who also died in Sabah and whose medical history is unknown,” Dr Noor Hisham said.

Dr Noor Hisham said 580 people were discharged from hospital today after being deemed fully recovered from the coronavirus.

Malaysia’s recoveries to date number 14,931 cases, or 65 per cent of all total cases.

“Sabah is still recording the highest number of cases among all the states, at 535 today or 73.1 per cent. More rT-PCR tests have been conducted in Sabah with its samples sent to the Peninsular for further analysis, as well as more antigen rapid test kits on the field,” he said during his press conference.

Selangor recorded 116 cases or 15.8 per cent today, out of which 49 were detected in existing clusters while 11 cases were found in new clusters.

Other states include Kuala Lumpur with 20 cases, Penang with 12 cases, Negri Sembilan and Labuan with nine cases respectively.

Of today’s 732 new cases, eight were imported from abroad. Six were Malaysians and two foreigners.

The Health Ministry also recorded three cases from travellers who returned from Sabah.

To date, the total number of people infected with Covid-19 from those who have been to Sabah since September 20 numbers 454.

The number of people under intensive care is 102, of which 31 cases require breathing assistance. 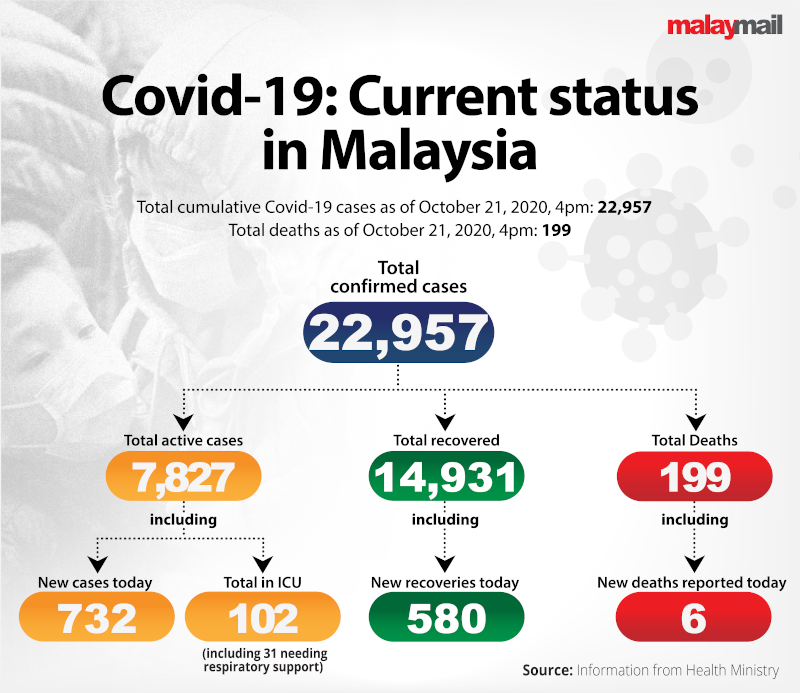