KUALA LUMPUR, Oct 20 — Malaysia was ranked 99th out of 161 countries last year in the Global Expression Report 2019/2020 released today by British freedom of speech watchdog Article 19, making it among countries deemed to have “restricted” expression.

Its score of 42 under the report’s GxR metric last year under the Pakatan Harapan (PH) government was however a significant rise compared to its score in 2014 (26) and 2009 (28), joining promising countries such as Sri Lanka, Maldives, Fiji, and South Korea.

Despite the positive trend, the watchdog chided the PH administration for failing to fulfill its promise to carry out democratic reforms after it took power in 2018, only to have any hope of further progress eliminated following the takeover by the Perikatan Nasional (PN) this year.

“The promised democratic opening promised by the Pakatan Harapan government in Malaysia faltered, and progress was not consolidated,” said the report.

It said the PH government’s commitment to transparency and reform “waned” after it took power, and 2019 was marked by “broken promises and echoes of old tactics”, including the use of the Sedition Act 1948 to suppress dissent.

“The government also reneged on promises to ratify human rights treaties after pressure from conservative groups,” it said, referring to U-turns on the International Convention on the Elimination of All Forms of Racial Discrimination and the Rome Statute of the International Criminal Court.

“In February 2020, the Pakatan Harapan government collapsed after the withdrawal of a coalition partner, giving way to a conservative government and dashing hopes for reform.”

PN rose to power this year following the fall of the PH government after the resignation of Tun Dr Mahathir Mohamad as prime minister, precipitated by his Parti Pribumi Bersatu Malaysia joining forces with former political enemies Umno and PAS. 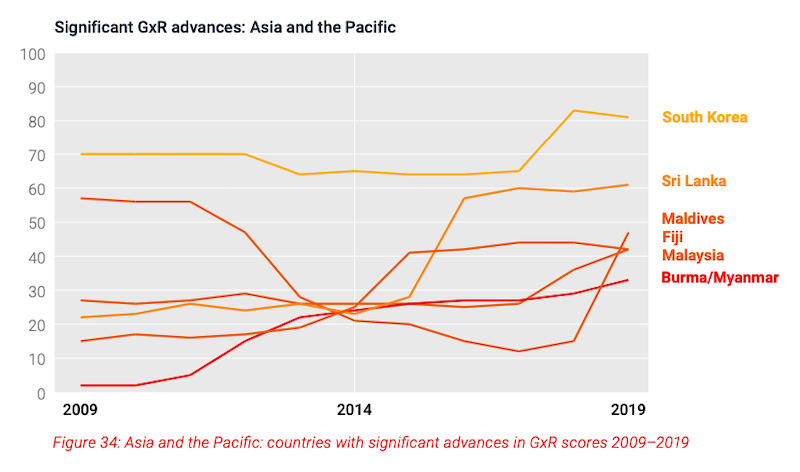 The report also highlighted Malaysia as an example where “ethnic and religious nationalism is on the rise with state-driven repression of minority voices and protests apparent in numerous forms”, along with Myanmar, Brazil, India, Sri Lanka, and Hungary.

It also highlighted the case of graphic designer and activist Fahmi Reza, whose appeal against an earlier conviction under the Communications and Multimedia Act 1998 was overturned by the Court of Appeal, as an example of repression of online expression.

Worldwide, Denmark led the list with a score of 93, followed by Switzerland, Norway, Canada, Sweden and Finland (all 91).

Worst performers included the likes of  North Korea (score of 0), Eriteria, Turkmenistan and Syria (all scoring 1).

Globally, Article 19 said 51 per cent of the world’s citizens are now living through a “freedom of expression crisis” — which has led to an atmosphere of fear and mistrust, with journalists and activists across the world at risk of harassment, arbitrary detention, torture and murder for demanding these fundamental rights.

“Now, faced by a global pandemic, we see the ways in which the systematic abuse of those in power has led to a breakdown in trust between citizen and state,” the group’s executive director Quinn McKew said in at the report’s launch.

“To protect our futures, the powerful must be brought to true accountability for the way their decisions take away access to basic needs — like clean air, water and food, fair and just conditions of work and health.”

McKew pointed out that in 2019 alone, 57 journalists worldwide were killed, and at least 250 journalists were behind bars at the end of the year, with harassment from security services worsening, sweeping surveillance measures taking hold and internet shutdowns.

The report’s GxR score tracks freedom of expression across the world, reflecting the rights of journalists, media, activists, and the public, by looking at how free each and every person is to post online, to march, to teach, and to access the information to participate

in society and hold those with power to account.

Twenty-five indicators were used in 161 countries to create an overall freedom of expression score for every country on a scale of 1 to 100. These scores place countries into one of five categories: “in crisis”, “highly restricted”, “restricted”, “less restricted”, and “open”.

Its data set was collected by the V-Dem Institute, based at the Department of Political Science, University of Gothenburg, Sweden.