KUALA LUMPUR, Sept 30 — The Health Ministry today recorded 89 new Covid-19 cases that were mostly from locally-transmitted cases, as well as two deaths that brings Malaysia’s cumulative death toll from the virus to 136.

Based on a map posted by Dr Noor Hisham, the 89 new cases today were recorded in every state and federal territory in the country except for Putrajaya and Melaka, with the bulk being in Sabah at 35 cases.

Detailed breakdown according to state and cluster

For Sabah’s 35 cases which all involved Malaysians, 18 were from screenings of those with symptoms, nine from the Kluster Bangau-Bangau, three are close contacts of Case 10,273, four are from the Kluster Benteng LD and one from the screening of a death in Hospital Tawau (the 136th death in the country from Covid-19).

Many of the cases detected in other states today involved those who were categorised as having returned from a “high-risk area”, namely Sabah.

For Kedah’s 13 cases that all involved Malaysians, five are close contacts of Case 11,129, three are from the new Kluster Tembok, two were detected upon return from Sabah, two from screenings of those with symptoms, and one new addition to the Kluster Sungai.

For Selangor’s 10 cases, five are Malaysians who had returned from Sabah, two Malaysians each from screenings of those with symptoms and those who wanted to start work, and one foreigner who was screened before returning to the country of origin.

For Johor’s eight cases that all involved Malaysians, seven are newly detected cases in the Kluster Bakawali, and one who had returned from Sabah.

Sarawak’s four new cases today all involve Malaysians, with three who returned from Sabah and one from Semenanjung Malaysia who was screened at an airport.

Kelantan’s two new cases are Malaysians who are close contacts of Case 11,132.

With the new additions today, the country’s cumulative total for Covid-19 cases is 11,224.

A total of 28 individuals were discharged today, which brings the total number of those discharged so far in Malaysia to 9,967.

In Malaysia, there are now 1,124 active Covid-19 cases under treatment, with 16 warded in the Intensive Care Unit (ICU) and three of them requiring intubation or respiratory support.

Details on the two deaths

For the two new deaths from Covid-19 recorded today, one which is the 135th death so far was in Kedah while the other (136th death) in Sabah, based on the Health Ministry’s data.

The death in Kedah is that of a Malaysian man aged 46 with a background of diabetes, heart and kidney diseases. This patient known as Case 11,207 is also the index case of a new cluster identified today in Kedah as Kluster Tembok.

This patient had started displaying symptoms on September 21 and was brought to the emergency department of Hospital Sultanah Bahiyah in Kedah on September 28 after experiencing difficulty in breathing. His condition had deteriorated and was verified as having died at 6.15pm on September 28.

As for the 136th death, a Malaysian man aged 70 (Case 11,185) with a background of being a final stage cancer patient had died at home on September 26 and was brought to the forensic unit of Hospital Tawau in Sabah, with Covid-19 test results returning positive on September 29. 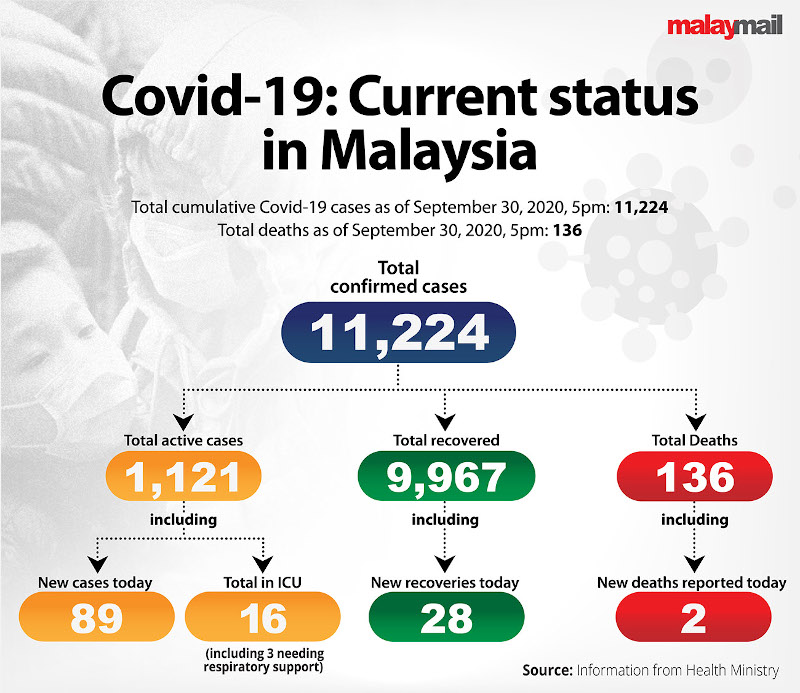