Former prime minister, Datuk Seri Najib Razak is pictured at Kuala Lumpur High Court on September 14, 2020. — Picture by Hari Anggara
Follow us on Instagram, subscribe to our Telegram channel and browser alerts for the latest news you need to know.
By IDA LIM

Mohd Hazem Abd Rahman, 48, said this while testifying as the 10th prosecution witness in Najib’s power abuse and money laundering trial over more than RM2 billion of 1MDB funds.

Mohd Hazem said businessman Low Taek Jho, also known as Jho Low, had told him of the purported Umno link when they met for the first time on July 15, 2012 at the Putrajaya Shangri-La Hotel.

“During this meeting, Jho Low informed me that the actual purpose 1MDB was established is to help Umno via business involving 1MDB strategic investments. But he did not say in detail how he would use 1MDB to help Umno,” he told the court.

Mohd Hazem described Low as being 1MDB’s adviser and also the adviser to Najib at the time.

Mohd Hazem said this meeting was where Najib’s then principal private secretary Datuk Azlin Alias had introduced him to Low, shortly after he had sent in his resume for the post of 1MDB chief operating officer (COO).

Among other things, Mohd Hazem said Low had also told him that 1MDB is a company operated according to Najib’s wishes, with all decisions at Najib’s sole discretion. 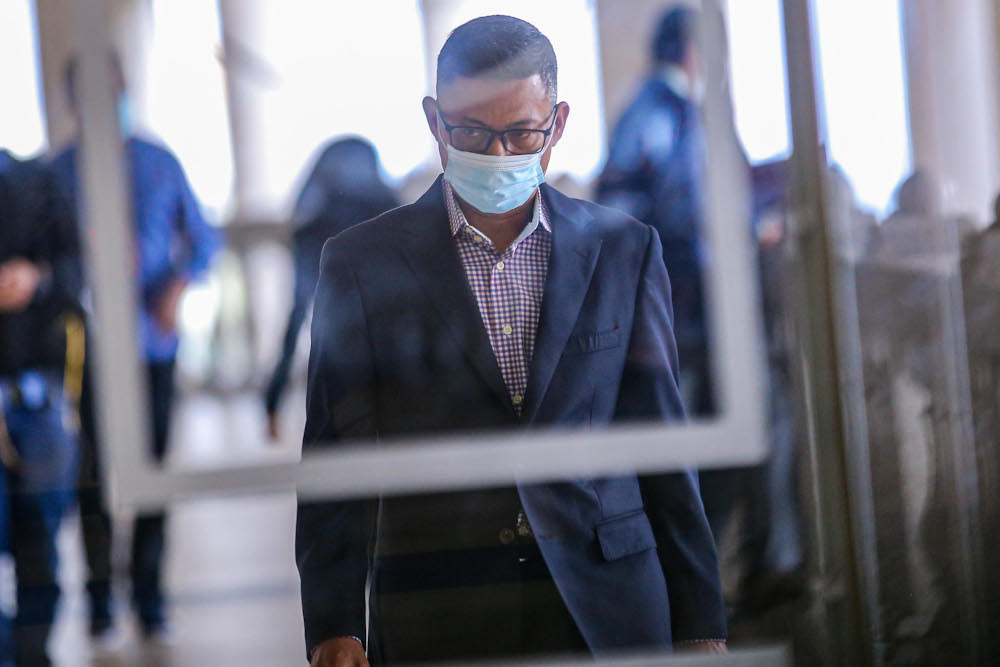 Throughout Mohd Hazem’s testimony in court today, he repeatedly mentioned Low’s assertion of 1MDB funds or purposes being for Umno’s interests. Mohd Hazem also said that he himself then expected that the money was for Najib’s “political funds”.

Mohd Hazem — who joined 1MDB as COO in August 2012 and subsequently became its CEO in 2013 — said that 1MDB senior management including himself did not know where the overseas funds raised by Low’s proxies using 1MDB projects had gone to.

Mohd Hazem said that he had questioned how 1MDB could bring back the money that it raised abroad to pay off 1MDB debt payments that were due and to fund 1MDB projects in Malaysia, but said Low had always rebuffed him by saying the funds raised overseas were Umno funds and could not be touched.

“I got angry a few times and questioned Jho Low about the 1MDB funds, but he still insisted that those were Umno’s funds,” he said.

Mohd Hazem also related a failed attempt via then 1MDB chairman Tan Sri Lodin Wok Kamaruddin to ask Najib for the return of such funds purportedly located overseas in order to enable 1MDB to pay off a loan, but said Lodin had returned from the meeting with Najib to say that the latter did not allow the funds to be brought back.

“Jho Low himself had told me that Datuk Seri Najib formed 1MDB to take care of Umno funds and this was one of the ways to obtain political funds through a company under the PM’s own supervision,” Mohd Hazem then added.

Later on, Mohd Hazem also said that Azlin himself had told him that 1MDB was to ensure Najib’s interests as well as that of Umno.

Najib’s lawyer Wan Aizuddin Wan Mohammed repeatedly stood up during Mohd Hazem’s testimony to record the defence’s objections to paragraphs about what Low or Azlin had allegedly told the former 1MDB CEO, on the grounds of such statements allegedly being hearsay as the now-fugitive Low and the late Azlin could not appear as witnesses in this trial.

“I want to state here that from early on when joining 1MDB, and told by Datuk Azlin that this company is to ensure the interests of Datuk Seri Najib and Umno, I did suspect that the company’s funds would be misappropriated,” he said.

However, Mohd Hazem said he had thought that the misappropriated funds could be later returned to the company within a certain period of time, if some of the funds for investments approved by the company’s board of directors and shareholder is used to pay Umno while the rest of the investment funds are invested with the “hope” of investment returns that would be able to replace the money used by Umno.

Earlier on in his testimony, Mohd Hazem said he had misgivings when 1MDB raised a lot of money by taking on debts with the excuse of funding projects and when the company borrowed more money than it needed, but said he had not expected to be tricked over the company’s affairs.

While describing Low as a “mastermind” as he was the one behind the business plans for 1MDB, Mohd Hazem said however he did not know of Low and his proxies’ plans to misappropriate 1MDB’s funds after sending them overseas, and had only discovered in news reports that the funds had been misappropriated.

Mohd Hazem said the business plans which Low planned for 1MDB had appeared to be normal plans with normal risks and potential profits, but highlighted the abnormal features such as the need for 1MDB to take on debts to raise funds for each project and with the funds eventually not able to be used and having unclear status.

“What is even more suspicious is that when the board of directors was not given full explanation of the investment’s status, and when the audit raised the issue of funds abroad, Jho Low had scrambled to prepare a report and script to Datuk Seri Najib and for us in 1MDB to answer the audit questions,” he said.

Mohd Hazem however said he did not report to the authorities for his misgivings over the status of 1MDB’s funds abroad to be investigated, due to various reasons such as his respect and fear for Najib as the prime minister as well as fears that his future career and job opportunities elsewhere would be jeopardised if he was seen as opposing the prime minister’s alleged instructions purportedly relayed via Low.

Najib’s lawyer Wan Aizuddin Wan Mohammed repeatedly stood up during Mohd Hazem’s testimony to record the defence’s objections to paragraphs about what Low or Azlin had allegedly told the former 1MDB CEO, on the grounds of such statements allegedly being hearsay as the now-fugitive Low and the late Azlin could not appear as witnesses in this trial.

On the first day of trial, the prosecution had said it would show that funds amounting to billions of ringgit were diverted from 1MDB, and that some of these funds allegedly ended up in Najib’s accounts.