Kedah’s Sivagangga cluster: What its emergence tells us about Malaysia’s Covid-19 fight

A restaurant owner who is a permanent resident in Malaysia had initially tested negative for Covid-19 at KLIA upon his return from Sivagangga, India on July 13. ― Picture by Ahmad Zamzahuri
Follow us on Instagram, subscribe to our Telegram channel and browser alerts for the latest news you need to know.
By IDA LIM

KUALA LUMPUR, Aug 5 ― The Sivagangga cluster of Covid-19 cases in Kedah has kept the state on alert in just one week since it has been announced, but what do we know about it and what cautionary lesson can we take from it?

Here’s everything you need to know about the past week and Malaysia’s current status in the fight against the Covid-19 pandemic in one quick snapshot, based on news reports and statistics from the Ministry of Health:

1. How the cluster started

It began with non-compliance of a returnee from abroad to Malaysia with home quarantine requirements.

A restaurant owner who is a permanent resident in Malaysia had initially tested negative for Covid-19 at KLIA upon his return from Sivagangga, India on July 13.

But the 57-year-old operator of a restaurant in the Hosba “mukim” (parish) in Kedah’s Kubang Pasu district did not comply with the home surveillance order and later tested positive on July 28 for Covid-19 on a repeated screening.

By July 28, a total of 28 of the restaurant owner’s close contacts were screened, with five living in the same household as him testing positive ― his Malaysian son and four non-Malaysian employees.

On the same day, Malaysia had a total of 25 active Covid-19 clusters nationwide, including this cluster.

In just one week’s time, the Sivagangga cluster is now the second-highest out of the 24 active clusters nationwide, in terms of active Covid-19 cases.

As of August 4, the Bukit Jalil immigration detention depot is the highest in terms of total cases recorded with 650 out of 1,662 having tested positive although only one case remains under treatment, while the Sepang immigration detention depot cluster is second-highest out of the current active clusters with 72 of 1,477 individuals screened recorded as positive with two remaining active cases, while the Sentosa cluster has 31 out of 1,026 individuals screened having tested positive and with 25 active cases.

3. Who are the others in the Sivagangga cluster?

Apart from his son and his four employees, screening of the restaurant owner’s close contacts later resulted in the detection of positive cases among his customers.

Two of his customers tested positive on July 31, with their family members ― aged two to 60 ― and even a colleague in one instance testing positive in early August too.

Those who tested positive include two boys aged two, one boy aged seven and another boy aged 10.

The latest addition to this cluster is a 64-year-old male customer who tested positive on August 3. He is the 21st case in the Sivagangga cluster and also Malaysia’s 9,000th Covid-19 patient.

The Sivagangga cluster’s cases are mostly in Hosba, Kubang Pasu, except for four cases in Batang Tunggang mukim in Padang Terap and one case in the Binjal mukim in Kubang Pasu. 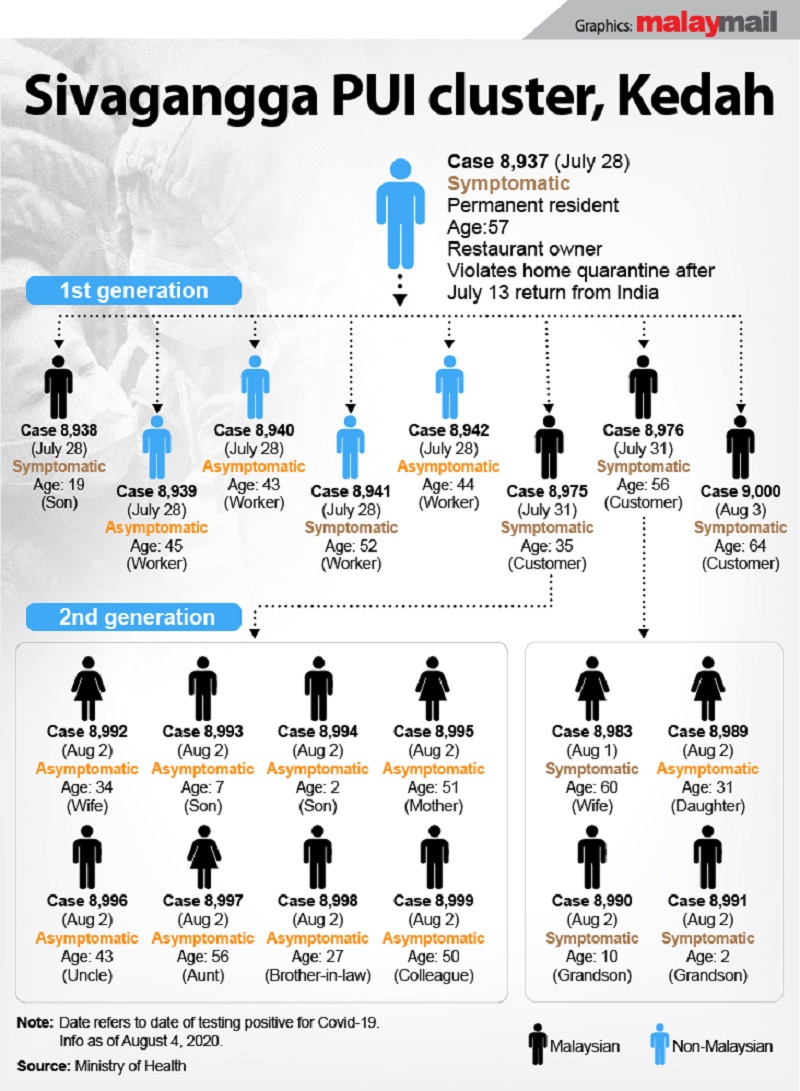 As of yesterday, Malaysia has recorded a cumulative total of 9,002 Covid-19 cases, with 96.5 per cent or 8,684 cases having recovered and with the death toll at 1.39 per cent or 125 deaths, while 193 are active cases that remain under treatment. 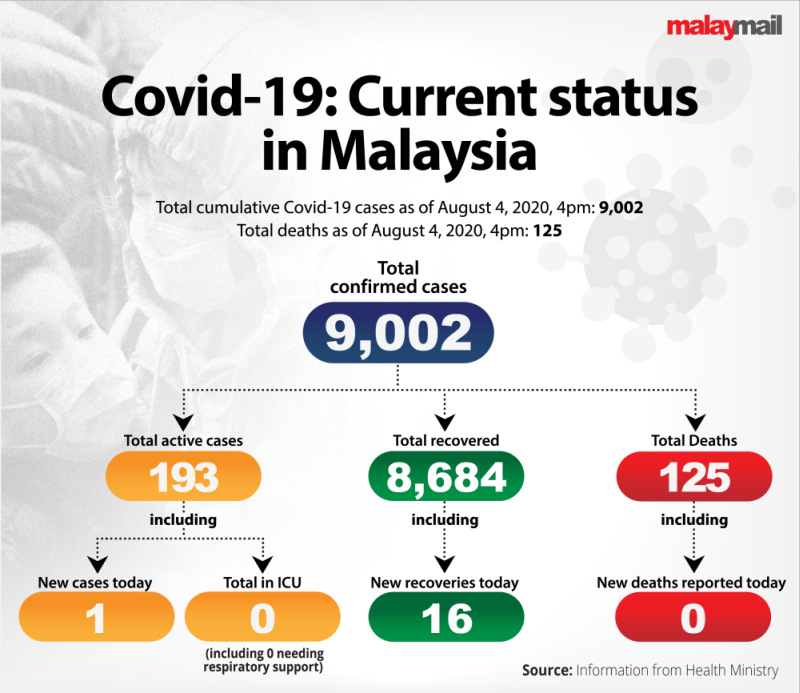 4. The wider impact from just one cluster

Some sense of normalcy has returned to Malaysia as a whole with schools and places of worship reopened and many businesses allowed to resume as the government has relaxed previous restrictions under the movement control order (MCO), albeit under a “new normal” of wearing face masks and maintaining physical distancing.

But with the July 28 announcement of the Sivagangga cluster, the authorities especially in Kedah took swift and decisive measures to again impose temporary restrictions as precautionary measures.

The Community Development Department (Kemas) on July 29 ordered 73 tabika (kindergarten) involving 1,605 students and three taska (daycare centre) involving 62 students in Kubang Pasu to be closed. One of the tabika was located just about 500 metres from the restaurant, while some guardians or parents were believed to have visited the restaurant.

The Kedah state government on July 30 said it was stepping up enforcement of standard operating procedures against Covid-19.

On August 2 which was also when children aged two to 10 were confirmed as being the latest additions to the Sivagangga cluster, five schools ― SMK Hosba, SK Hosba, SMK Megat Dewa, SK Megat Dewa in Kubang Pasu and SK Kubang Palas in Padang Terap ― were ordered to close for 28 days until August 29. The 28 days are for a 14-day quarantine period and a further 14-day observation period.

On August 3, Senior Minister Datuk Seri Ismail Sabri Yaakob announced the federal government’s approval of the Kedah government’s application for a targeted enhanced movement control order from August 3 to August 30 of four locations. This would mean roadblocks and control of movement by the authorities such as preventing outsiders from entering these locations.

Also on August 2, the Kedah state Islamic religious affairs department announced a list of mosques in the Kubang Pasu and Padang Terap districts required to suspend all activities except for the azan call and for congregational prayers to be allowed for a maximum of three with various conditions, and for all suraus in listed areas to be closed until further notice. 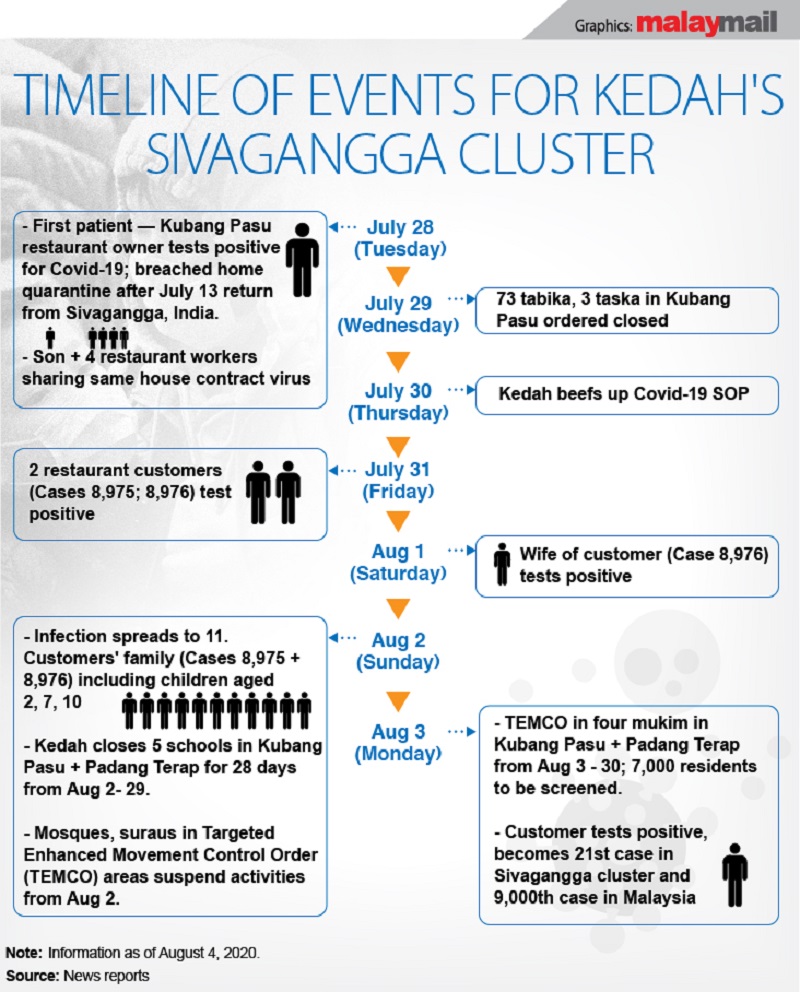 5. Is the Sivagangga cluster unique?

As of yesterday, the Elsa cluster had four active cases, Melbourne PUI two active cases, AL Khobar PUI cluster one active case, while the other named clusters resulting from non-compliance with home quarantine did not have active cases.

6. When home quarantine was introduced

After considerable success in flattening the curve or slowing the spread of Covid-19 cases, the Malaysian authorities had on June 10 started allowing Malaysians returning from abroad to undergo the mandatory 14-day quarantine at their own homes instead of government-designated quarantine centres if they test negative upon arrival, while those who test positive would still be sent to hospital for treatment.

The home quarantine came with rules such as the wearing of a wristband for easy identification and monitoring of their movements through the MySejahtera application, keeping away from family members and not sharing personal items with those in the same household during the quarantine period, and undergoing a Covid-19 test again on the 13th day.

But some of those who were expected to exercise self-discipline by staying quarantined at home upon their return abroad fail to do so. On July 23, Dr Noor Hisham said that 24.8 per cent of those undergoing home quarantine from July 7 to July 20 had failed to do the required self-assessment daily. On July 25, the government said 2,897 individuals had yet to conduct the second Covid-19 test on the 13th day of their home quarantine.

By July 24, the Malaysian government reimposed mandatory quarantine at government-designated quarantine centres for Malaysians and foreigners returning from abroad with the returnees to bear the cost partially, cancelling the home quarantine option due to non-compliance by some of the returnees such as those caught eating at restaurants while wearing the wristbands.

Yesterday, Parliament was told that the government has so far spent RM115.9 million on designated Covid-19 quarantine centres across the country, with the government bearing about half the cost to place returnees in such facilities while the returnees pay RM150 per day or RM2,100 for the entire 14-day period.

On July 27, Dr Noor Hisham stressed the importance of preventing new Covid-19 cases and did not discount the possibility of a third wave of Covid-19 infections in Malaysia if the public continues to be complacent in observing standard operating procedures (SOP).

Describing new Covid-19 clusters as akin to burning “embers”, Dr Noor Hisham cautioned that non-compliance with SOP would be the fuel that would cause Covid-19 cases to spread like a wildfire and experience a sudden spike in numbers.

“Should the public remain careless and fail to properly observe social distancing, wearing face masks, and practicing the SOPs, then the embers will fan into an open flame which will flare up and spread like wildfire,” he had said then.

In Dr Noor Hisham’s own words on July 29, a third wave of Covid-19 cases would result in mass mobilisation of health workers: “We have been working hard for seven months to prevent the spread, if [the third wave] happens we will have to work hard for another four months and 25,000 health personnel will be recalled to work for 20 hours a day if cases escalate.”