KUALA LUMPUR, March 28 — Kepong and Klang are now officially red zones or Covid-19 hotspots with more than 40 cases each, and Lembah Pantai continues to record the highest number of Covid-19 patients while Hulu Langat has overtaken Petaling Jaya in terms of Covid-19 case numbers, the latest data released yesterday showed.

In the latest available numbers as of March 26 noon in new maps released by the health director-general yesterday, Lembah Pantai in Kuala Lumpur continues to be in the top two spots at 208 cases out of 2,031 cases, followed by Hulu Langat in Selangor at 186 cases, Petaling Jaya in Selangor at 176 cases, Seremban in Negri Sembilan at 85 and Kluang in Johor at 83.

These three areas had always been in the top three districts in terms of Covid-19 cases in the past four releases, but the March 26 figures released yesterday is the first time that Hulu Langat has occupied the second highest spot. According to the Health Ministry's designation of hotspots, districts with the colour code of orange is for those where between 20 and 40 Covid-19 cases have been recorded, while those known as the red zones are where more than 40 cases have been reported.

As the days go by, the number of hotspots designated as red zones has continued to grow in tandem with the increase in the total cumulative confirmed Covid-19 cases every day.

Based on the March 26 figures released yesterday, there are now 15 red zones throughout Malaysia, while there are eight orange zones (with the addition of Kota Setar) throughout the country. 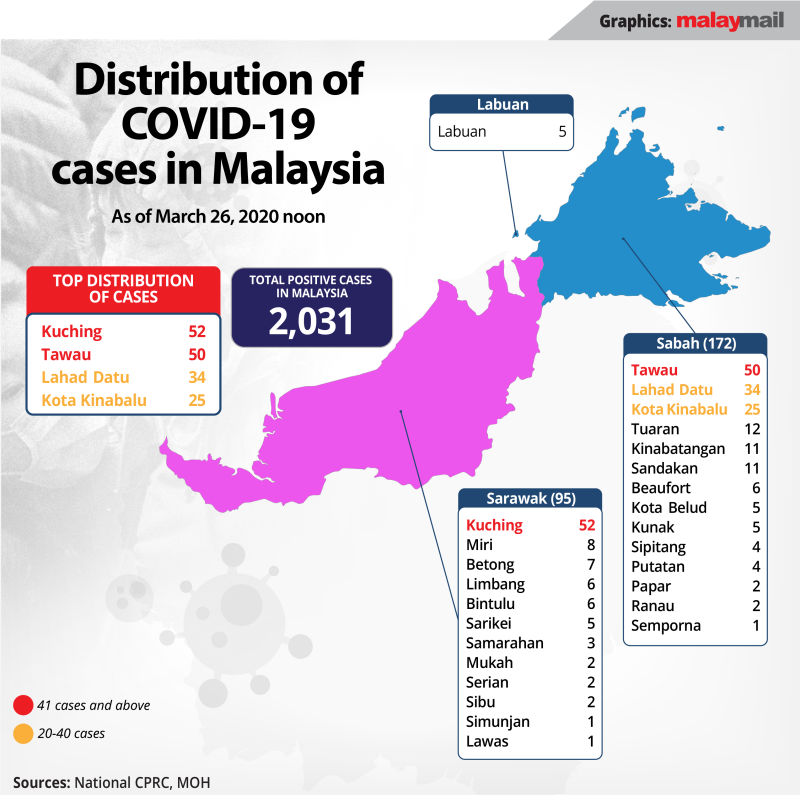 In the March 25 figures, there were a total of 39 districts spread out over seven states in Malaysia that still had not recorded any Covid-19 cases, with the bulk of these districts being in Sabah (11 districts) and Sarawak (19 districts).

But in the March 26 figures released yesterday, three districts were no longer categorised as free of Covid-19 cases, namely Pokok Sena in Kedah, Cameron Highlands in Pahang, Tanah Merah in Kelantan.

Instead, the March 26 figures showed that Cameron Highlands has one Covid-19 case, while Tanah Merah also has one case recorded.

So as of March 26, there are only 36 districts which have yet to have records of Covid-19 cases. 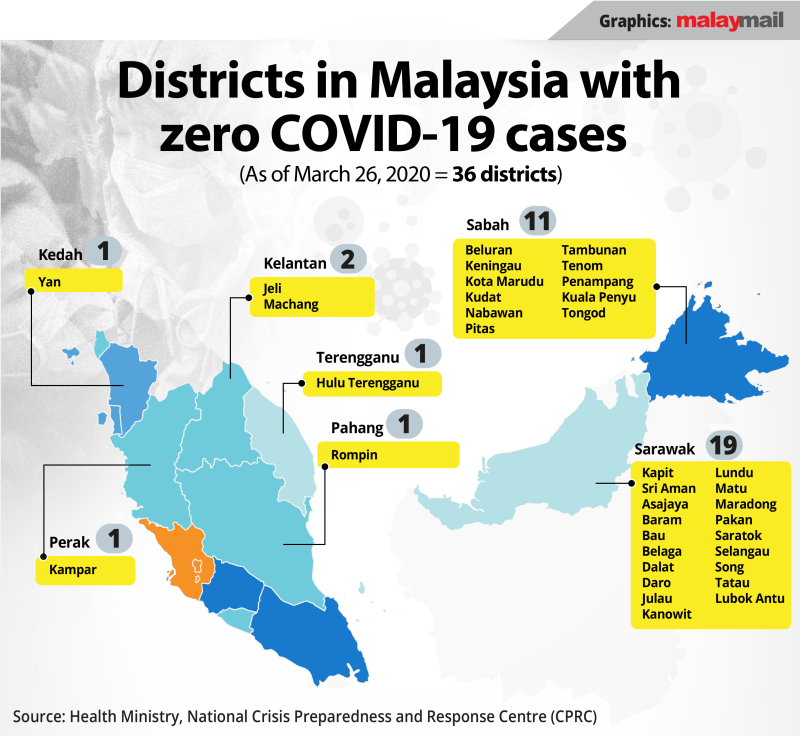 Residents in Covid-19-free districts should not be complacent however.

Health director-general Datuk Dr Noor Hisham Abdullah had the day before urged such residents to play their part in ensuring that their respective districts maintain a record of zero Covid-19 cases, by taking several precautionary measures.

The Health Ministry's poster containing the map of such districts as of March 25 had urged residents to practise the four precautionary steps of complying with the government's movement control order by staying at home; frequent washing of hands with soap and water or use of hand sanitiser; practising social distancing by staying one metre apart from others; and making purchases and payments online instead of physically.

In the latest figures available, the Health Ministry said the total number of confirmed cases in Malaysia as of March 27 noon is 2,161 cases. 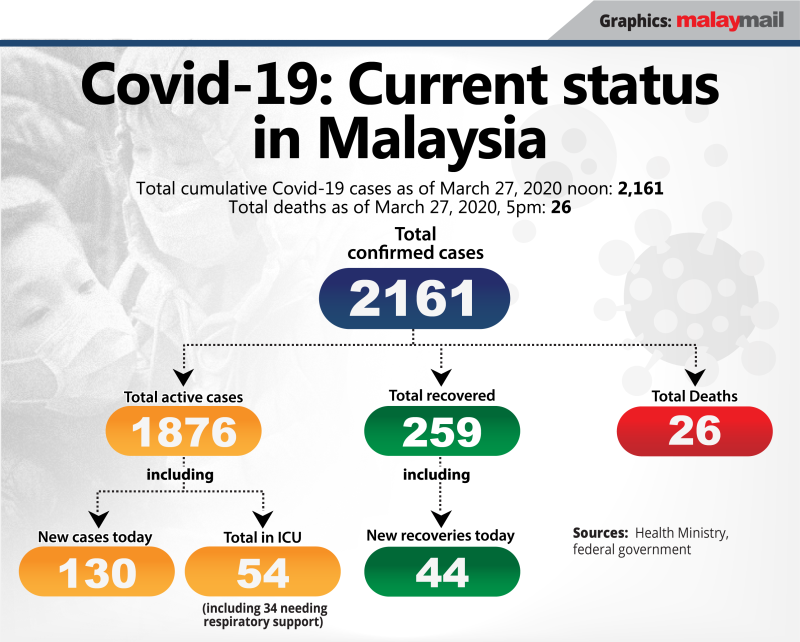 Malaysia also continued to record new deaths, with the death toll for Covid-19 now at 26.