KUALA LUMPUR, June 16 — The Human Resources Ministry has proposed introducing three days’ paternity leave for fathers working in the private sector, to be funded by employers.

Its deputy minister Datuk Mahfuz Omar said the Cabinet has yet to approve the proposal and the government would not likely be able to amend the Employment Act 1955 in the next Parliament meeting next month.

When asked about the Malaysian Employers Federation’s (MEF) suggestion that the Social Security Organisation (Socso) fund the cost of the paternity leave, Mahfuz brushed it aside.

“How can it be Socso?” Mahfuz told Malay Mail.

“Employers also get the three days’ leave. They should look at how it can motivate workers to work better. They should share profits.”

“Many young fathers today are very involved in playing their part in raising kids. Rightfully so. We encourage that.”

She described her experience as a mother, where she found it crucial to have the father around in the first week after child birth and that it was especially challenging when the couple had other young children.

“Care for the wife, attending to visitors, if there are young kids — they need care too (includes pick up from schools if mom has been doing that), sorting out discharge from hospital, night time baby is up every two hours,” Yeoh explained, when asked what sort of duties a father usually performed after a child is born.

The DAP lawmaker said it was even more challenging if a mother had a caesarean section as her movement would be restricted for the first two or three days.

Here’s a look at what private employment has provided for new fathers elsewhere in South-east Asia. 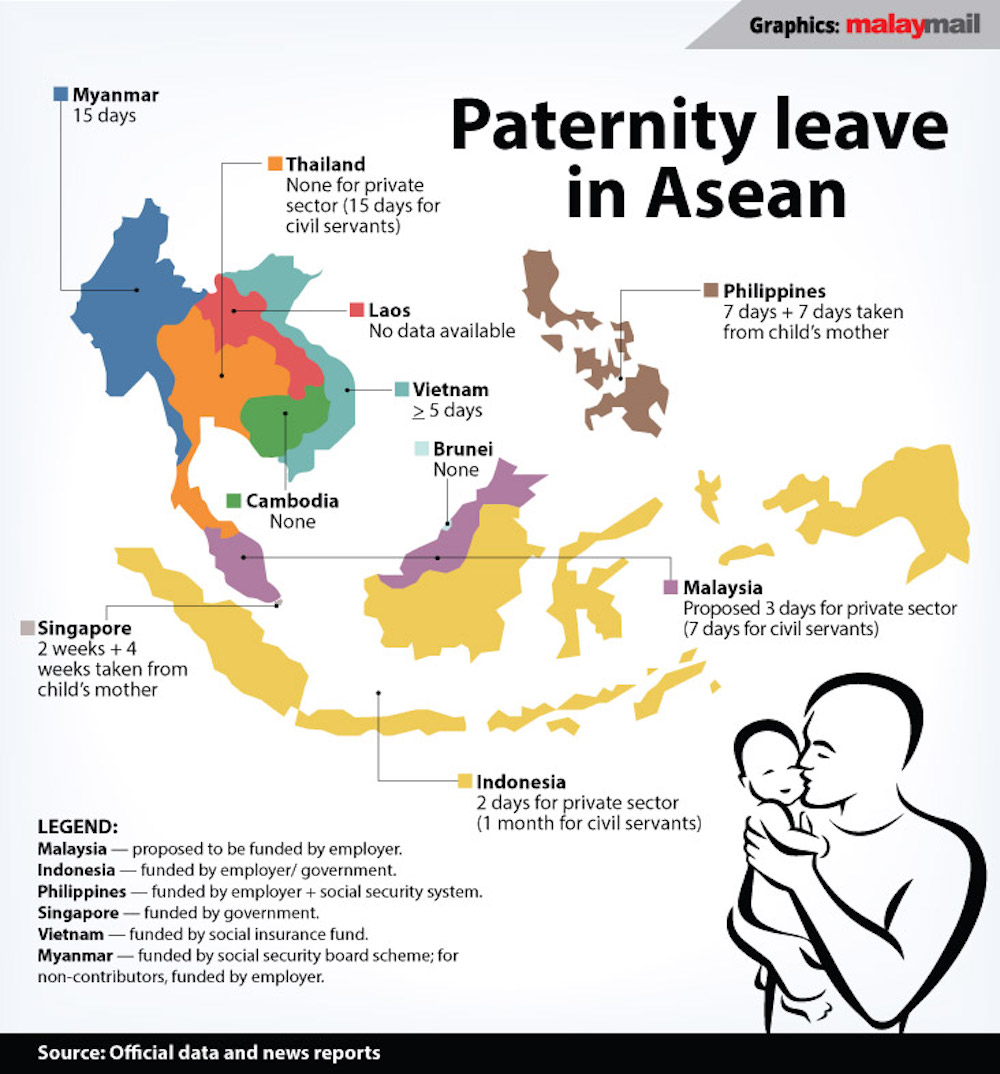 Singapore provides two weeks’ paternity leave for fathers of children who are Singaporean citizens, with fathers also able to share another four weeks of their wives’ 16-week maternity leave. The parental leave is funded by the government.

Myanmar provides 15 days’ paternity leave, funded by the country’s social security board scheme unless the employee is not a contributor to the scheme, in which case it will be borne by the employer.

The Philippines provides up to 14 days’ paternity leave, comprising seven days funded by the employer and another seven days that can be taken from a mother’s 105 days’ maternity leave that is funded by its social security system.

Indonesia provides two days’ paternity leave in the private sector, funded by the employer, and one month for civil servants.

Thailand provides 15 days of paternity leave for civil servants, with none mandated by the law for the private sector.

No paternity leave is provided by law in Brunei or Cambodia, while no data is available on Laos.