What does it mean to be middle class in Malaysia?

KUALA LUMPUR, Sept 15 — As the cost of living continues to rise and salaries struggle to catch up, Malaysia’s middle class may be shrinking with some hanging on by a thread and others even falling off into poverty.

Although there has been a steady but painfully small incremental rise in household income in Malaysia, economists and academics say the term “middle class” does not have the same meaning it had more than 10 years ago.

With salaries unable to match inflation, being middle class no longer means as comfortable a living as compared to 20 years ago.

While disposable income or savings is a good indicator of how many people “live comfortably” or fall within the middle class category, both Bank Negara and the Statistics Department said they do not keep track of such data.

The median household income was RM3,626.

Over the weekend, Minister in the Prime Minister’s Department Datuk Seri Abdul Wahid Omar was quoted by state news agency Bernama as saying the preliminary report on the latest Household Income Survey showed the median stood at RM4,258, this year.

Who are the middle class?

Institute for Democracy and Economic Affairs chief executive officer Wan Saiful Wan Jan said the middle class should consist of the middle 40 per cent with monthly incomes of at least RM3,000 all the way up to the top 20 per cent of incomes, which has a median of about RM9,800 for 2012. Based on the household income data for 2012, less than 51.8 per cent of Malaysian households belong in that category.

But does a household income of RM3,000 a month really put a family of four among the middle class?

Universiti Sains Malaysia (USM) associate professor in economics Dr Lean Hooi Hooi said the middle class should be defined as individuals or households with RM4,000 to RM20,000 of disposable income every month.

“I think over the past five years, the inflation rate has been very high even though officially it was only at two to three per cent. We all feel the pain.

“Just go to the hawkers… for noodles or rice, prices go up 10 per cent every year,” she said in a phone interview recently.

Sunway University Economics and Management Department head Dr Wong Koi Nyen, on the other hand, defined the middle class as semi-professionals and young professionals, based on their earning range per month of about RM5,000 and RM10,000 for families. 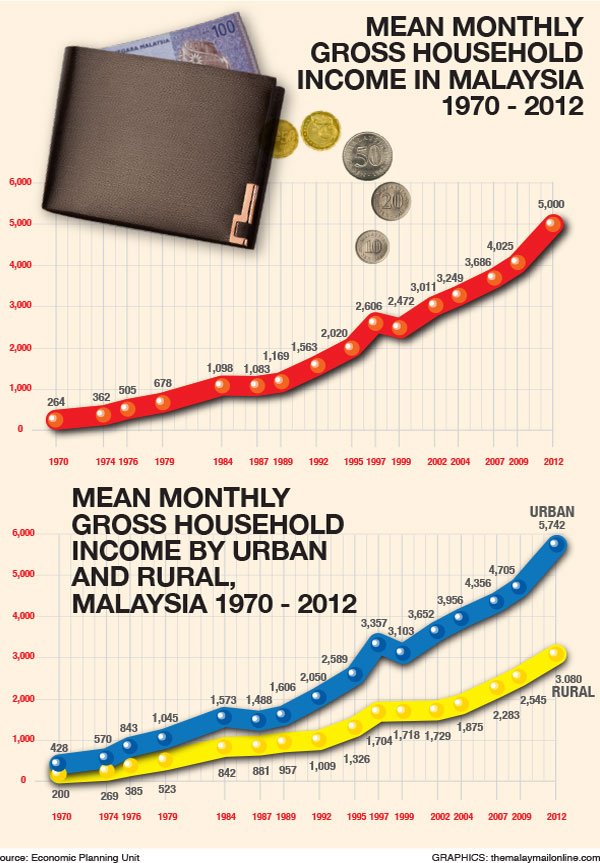 The 9.7 per cent of households in the highest income bracket of RM10,000 per month and above made up 31.5 per cent of overall household income recorded in the country.

For the semi-professionals and young professionals, Wong said their main source of income is solely from their salaries as most do not have assets.

“Due to the lifestyle of KL, I don’t think they can make ends meet because the main bulk of their expenses go to car installments.

“I believe they have more than one credit card, which are liabilities, and if they have a family then they have to commit to their children’s education, health insurance and if they can afford, maybe an apartment,” he said.

He added that even earning within that range, they may be considered middle class but they will still struggle financially, with no savings at the end of the month.

He pointed out that based on statistics from Bank Negara, household debt grew close to 13 per cent annually from 2003 to 2013 but Malaysians’ income only grew about five per cent on average.

“So you can see that the growth in income cannot catch up to the growth of household debt,” he said adding that the four main liabilities for most Malaysians are home loans, car loans, credit card debts and personal loans.

USM’s Lean said RM10,000 in an urban setting such as the Klang Valley and Penang would only provide a “standard living”, and not a luxurious one.

She said an example of a typical family with four children’s expenses include: -

“Your RM10,000 is not enough to cover, definitely not entertainment, or even holidays in Malaysia.

“Gone are the days when anyone earning RM10,000 was considered rich,” she said.

Middle class group in the past

This is no longer the general rule with urban housing especially out of reach for many on lower incomes, he added.

Wong echoed the same sentiments and said the middle class group were much better off 10 years ago and beyond that.

Back then, most unmarried individuals stayed with their parents, saving on rent at a time when the cost of living was lower, he said.

“Due to the high cost of living, being middle class today doesn’t mean anything.

“It meant something 10 years ago, 20 years ago especially after the economy has been transformed from Third World to developing, we can tell because there were fewer people living in poverty in the 70s, 80s.

“But now it doesn’t mean anything,” he said.

Keep up or risk falling into poverty

Lim said the prospects of upward mobility “look dismal” for many in the middle class especially those self employed or in the informal sector.

“As the government’s record on both affordable housing and quality education has been abysmal and unlikely to improve, the middle class has to gear up for harder times ahead especially when the subsidies on essential goods, petrol, electricity and other items of everyday consumption are reduced or withdrawn,” he warned.

“Instead of working for money, they should know how to make money work for them,” he said.

“I think people have to upgrade in terms of their skills of their employment. You cannot forever be stuck at this level. You need to be more productive over time. I think productivity, talent will help you to earn more,” he added.

He also said people should also be looking for opportunities outside of Malaysia, as experience abroad would add to their bargaining power for a higher salary when they return.

And for those who live in urban areas, he stressed the importance of being disciplined in their spending.

He said it is important to allocate 10 to 15 per cent of one’s salary to savings and then pay the bills before spending on things which are not considered necessities.

But he acknowledged that being disciplined and not indulging in the luxuries cities like KL have to offer could be a challenge to most.

“But if you want to adopt the KL city type of lifestyle, then you can never save.”

“I think over time, again what is relevant today may not be relevant tomorrow, it doesn’t mean anything.”

“Today we see RM5,000 per month is considered middle class but RM5,000 tomorrow might go down to the bottom 40 per cent,” he said.

The trade off to having less cash, but more luxurious items

Both Wong and USM’s Lean also said the biggest difference between the middle class in the past and those in the group today, is the access to a variety of high-tech consumer products as well as niche services which did not exist 10 years ago.

“No doubt we struggle to make ends meet but we have better quality of life in terms of Internet, better coffee, so you can have these sort of counter arguments.

“Depends on what sort of things you are after,” Wong said.