Zahid says wouldn’t have accepted RM10m donation if it came from ‘kingpin, gangster or gambling’, insists not dirty money

Caught on cam: Four Malayan tiger cubs along with their mother spotted in the wild in Perak

Witness: Syed Saddiq told me to distribute RM1m ahead of MACC investigations into RM250,000 stolen from his home

In KL, woman charged with uploading pornographic pictures on Twitter

After burying Bad the dog, Pahang police to set up memorial for canines that died while serving the contingent

Cancer Research Malaysia’s team that worked together to create AriCa so that Asian women can get a more accurate picture of their breast cancer diagnosis. — Picture by Cancer Research Malaysia
Follow us on Instagram, subscribe to our Telegram channel and browser alerts for the latest news you need to know.
By ANNE GRACE SAVITHA

PETALING JAYA, March 29 — For the longest time, Asian women were unable to get an accurate picture of their breast cancer diagnosis and suitable treatment plans to prevent cancer.

This was because the majority of cancer mutation prediction tools were skewed towards women of European descent and were less accurate for Asian women.

A situation which made them lose the opportunity of being aware of their genetic risk status.

This has been resolved after a group of Malaysian researchers and their team created a tool to help Asian women get a more accurate picture of their faulty BRCA1 and BRCA2 genes.

The tool, Asian Risk Generator (ARiCa) generates a personalised score of their likelihood of carrying a faulty BRCA gene with a 71 per cent accuracy rate as compared to other tools that are skewed towards women of European descent. 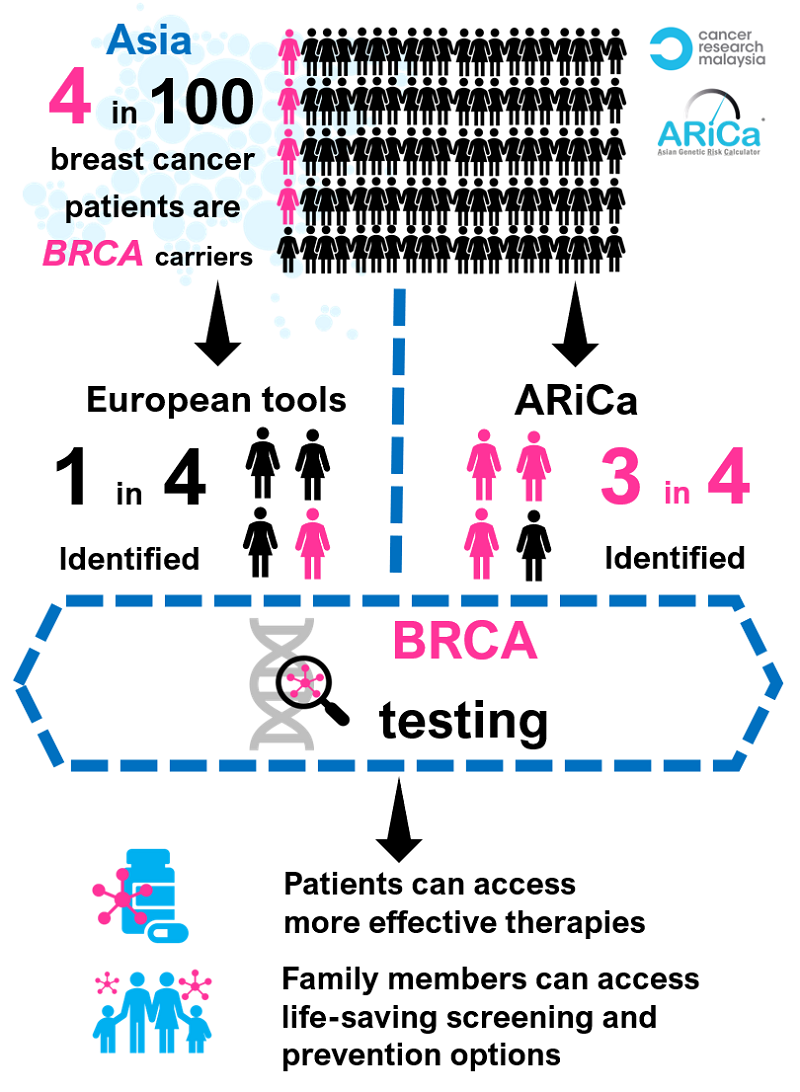 BRCA1 or BRCA2 genes are tumour suppressor genes that help keep breast, ovarian, and other types of cells from growing and dividing too rapidly or in an uncontrolled way.

The National Cancer Institute states that people who inherit harmful variants of one of these genes have an increased risk of several cancers, especially breast and ovarian cancer.

ARiCa uses patient information, such as age of onset of breast cancer, pathology information, and family history of cancer, to generate personalised likelihood score of being a BRCA carrier.

Armed with the score, women can decide if genetic testing is appropriate for them.

Individuals who have a high score are recommended to attend genetic counselling, and if they wish, they can proceed with a genetic test, which is typically conducted using either blood or saliva samples.

Many famous celebrities have also taken to genetic testing and proceeded with surgeries after finding out their faulty BRCA genes.

In 2013, Angelina Jolie underwent a prophylactic double mastectomy — surgery in which both breasts are removed — after knowing that she carries a faulty BRCA1 gene which would increase the risk of her getting breast and ovarian cancers.

Actress Christina Applegate underwent a double mastectomy after finding out that she had early-stage breast cancer in 2008.

Not just that, she also discovered that she was carrying the BRCA1 mutation and that made her undergo another surgery to remove her ovaries and fallopian tubes as well.

“This makes Asian women who are diagnosed with breast cancer and their family members miss out on the opportunity of being aware of their genetic risk status, thereby losing the possibility for cancer prevention and accurate treatment selection.

“With ARiCa, women can be empowered to make informed choices about their health and healthcare practitioners can provide more accurate treatment plans for their patients,” she said.

Among the institutions that Cancer Research Malaysia worked with include the University of Cambridge and Universiti Malaya (UM) to analyse BRCA1 and BRCA2 in more than 8,000 breast cancer patients from Malaysia and Singapore.

UM Cancer Research Institute head Dr Nur Aishah Mohd Taib said that prophylactic surgery and targeted therapy may not be routinely available in government-funded and public hospitals, but knowing the BRCA mutation status was important for patients and family members.

“This is in order for them to be aware of their individual risk that enables early detection of cancer and other risk management strategies.

“At UM, we have set up a risk management clinic for more than 10 years to help affected and unaffected carriers get access to risk-reducing strategies and we hope tools like ARiCa will enable other hospitals to set up similar clinics,” she said.

ARiCa was developed based on a cohort of breast cancer patients where data collection started in 2003 and its genetic testing completed in 2019.

For more information on BRCA testing, surf here while anyone interested to read the journal, can surf here.

Caught on cam: Four Malayan tiger cubs along with their mother spotted in the wild in Perak

The keepers of Ukraine’s keys... and secrets