A general view shows the House of Music, designed by Japanese architect Sou Fujimoto in Budapest, Hungary, January 23, 2022. — Reuters pic
Follow us on Instagram, subscribe to our Telegram channel and browser alerts for the latest news you need to know.

Designed by Japanese architect Sou Fujimoto, the House of Music, Hungary opened its doors to visitors on Sunday with concerts by musicians of the Liszt Ferenc Music Academy.

It is part of the ruling nationalist government’s huge project of transforming Budapest’s City Park into a showcase of Hungarian culture, which was entangled in political controversy due to its hefty costs and the loss of some green areas.

The building, some say, resembles a giant mushroom with its perforated roof which channels light to all its levels via 100 so-called “light wells”, or large holes.

It has a 12-metre high continuous glass wall that consists of 94 pieces in a zig-zag arrangement that reflects back sound, creating homogeneous acoustics with the sound quality the same everywhere, its designers say.

“The glass walls are not placed in a parallel way but it is a zig-zag surface where the sound is broken,” said operations director Marton Horn.

“Behind the concert stage a glass surface was created which can be adjusted. There are about one metre large glass panels which can be individually adjusted, and with this the sound can be channelled up towards the ceiling where the sound is absorbed.”

The building houses a concert hall, several music venues, interactive exhibitions, and a library. Its huge glass surfaces blend the borders between indoors and out, between the natural and the built environment.

“I like the building... Many buildings were built amid controversy, why there and why in that way. But I do like it,” said Daniel, one of the first visitors.

The House of Music recently won the “Best Use of Music in Property Development” at the Music Cities Awards. It features on Time Out’s list of best new things in the world in 2022. — Reuters 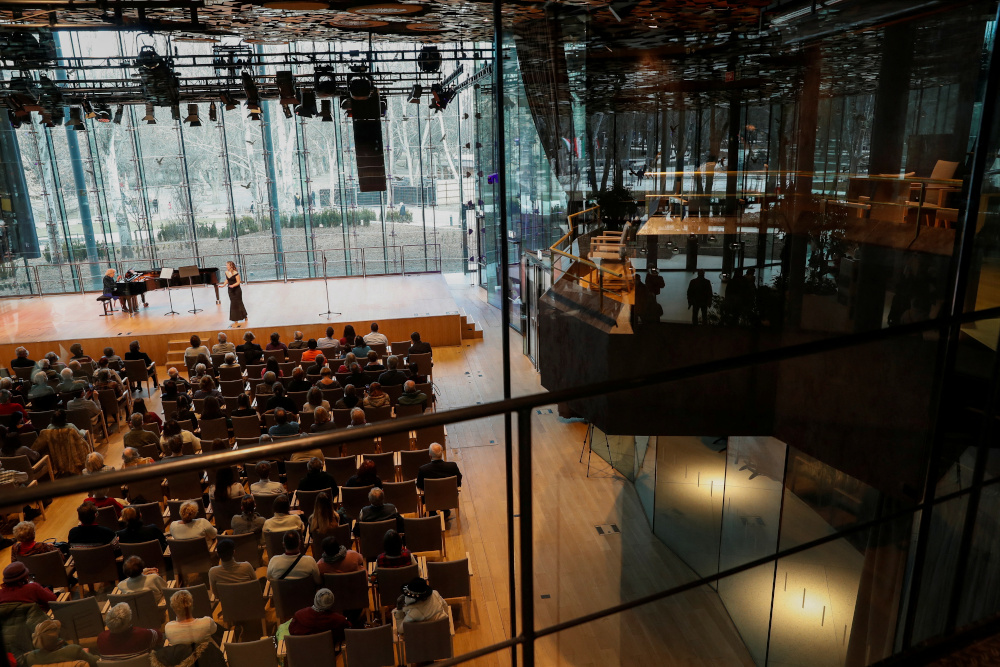 Visitors attend a concert at the concert hall of the House of Music, designed by Japanese architect Sou Fujimoto in Budapest, Hungary, January 23, 2022. — Reuters pic

Rare pink diamond to go under hammer in Geneva