‘Cashier may have made an error’, says owner of Penang restaurant that sold RM18 ‘kailan ikan masin’

The restaurant hopes the customer will contact them to solve the issue. ― Pictures from Facebook/Penang Kini
Follow us on Instagram, subscribe to our Telegram channel and browser alerts for the latest news you need to know.
By MELANIE CHALIL

PETALING JAYA, Nov 30 ― The owner of a restaurant that is being investigated for charging a customer RM18 for a ‘kailan ikan masin’ (kailan with salted fish) dish said the cashier may have wrongly keyed in the price.

“Our mistake might have been the cashier wrongly keyed in the price of a large dish.

“Or perhaps the customer ordered a large portion but the kitchen crew prepared a small portion instead based on the picture that went viral,” the owner said.

The restaurant said if they were at fault, the customer should have met the manager to bring the matter to their attention instead of taking it to social media.

“We are hoping for cooperation from the complainant and that he will contact the restaurant for further action.”

In the post, the restaurant clarified that their kailan with salted fish dish was priced according to portion size: RM6 (small), RM12 (medium) and RM18 (large) by sharing a screenshot of the menu. 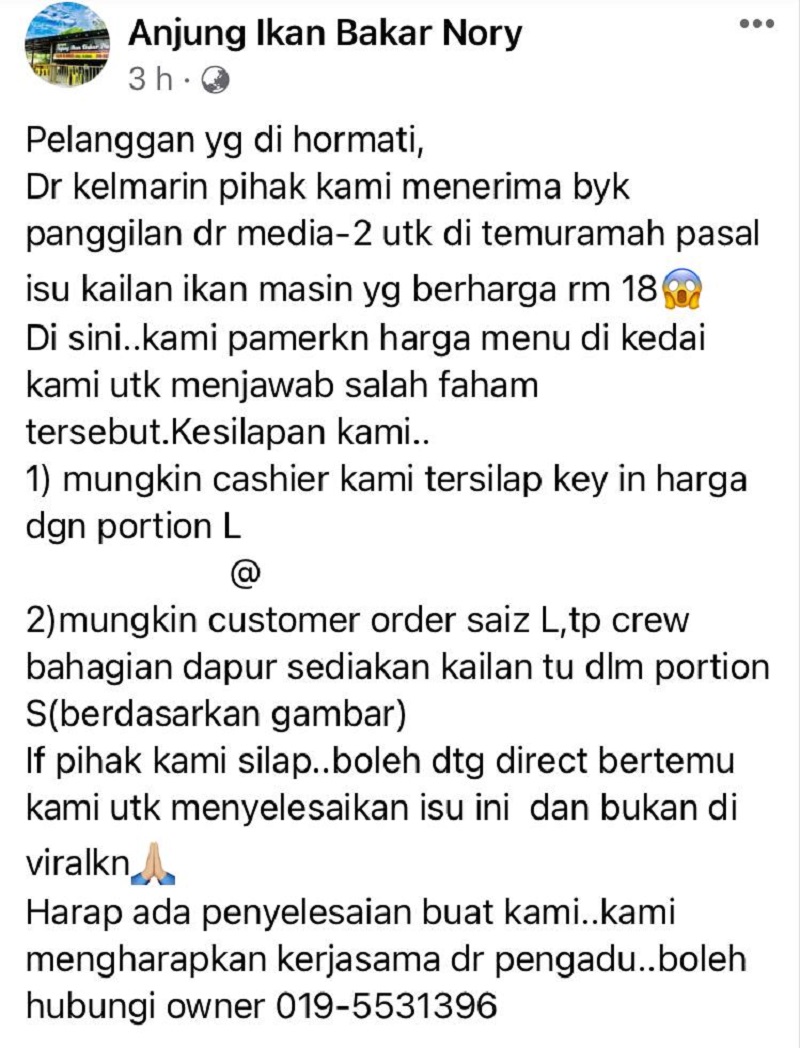 On Sunday, social media went into overdrive with news of a customer being overcharged for a single portion of the popular stir-fried vegetable dish.

The Domestic Trade and Consumer Affairs Ministry’s branch office in Penang issued a Goods Information Verification Notice to the restaurant operator to clarify the price of the dish.

The restaurant operator has been given two days to clarify the matter to enable the office to investigate further.

Earlier this month, tourists in Langkawi kicked up a fuss after they were charged over RM1,000 for one sea bass.

The news also comes at a time when the price of vegetables in Malaysia have shot through the roof due to bad weather, labour shortage and higher production cost.