James’ comments have triggered massive backlash both at home and abroad, with many labelling her words as uninformed and ignorant. — Picture from Instagram/samanthakayty
Follow us on Instagram, subscribe to our Telegram channel and browser alerts for the latest news you need to know.
By TAN MEI ZI

James, 25, took to her Instagram Stories on Monday afternoon to declare that the reactions shown by protestors were apparently proof that the “whites (have) won.”

“I don’t live in America and it has nothing to do with me, but to me, it seems like the ‘whites’ won.

“If you’re angry, you respond in rage and anguish and that means it has power over you. They have power over you,” she wrote, along with a caption that read, “foolish humans.”

James, who is of Malaysian Chinese-Brazilian heritage, also told African Americans to “take it as a challenge” and claimed that they “chose to be born as coloured (people) in America.”

When another user messaged her directly to ask what she meant when she said people “choose” to be born with a certain skin colour, James responded by saying that our “souls” determine such outcomes.

She also identified herself as a white person in her replies.

“Our souls chose this life, this country, this race, this human form specifically for a reason.

“I always wondered why I was born in Malaysia as a white girl with a Chinese mum and Indian grandparents and a Brazilian dad.

“But I chose this all for a reason, as a soul,” she wrote. 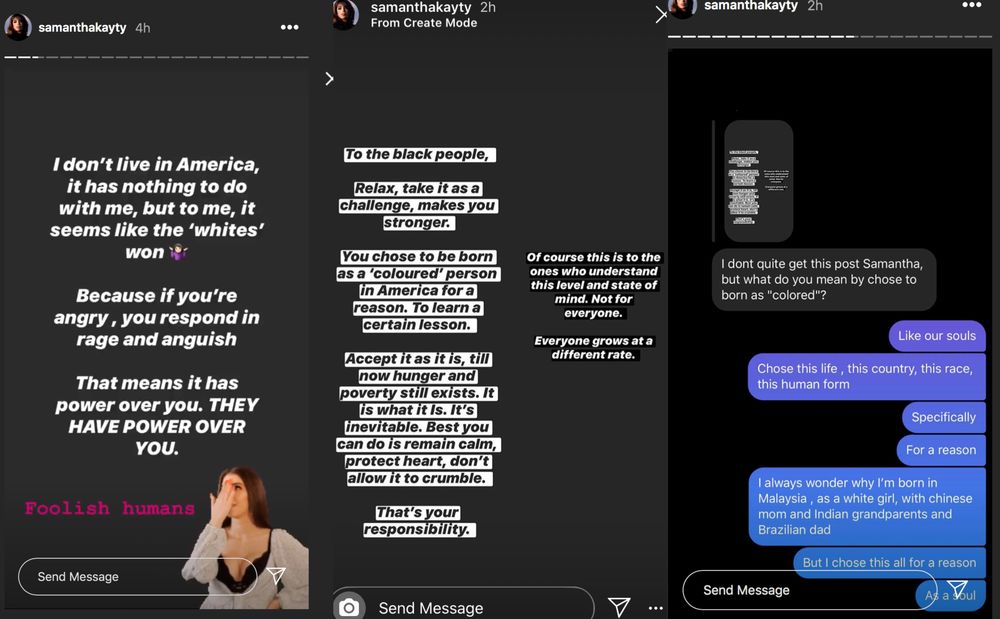 Social media users have called out the former beauty queen for her Instagram Stories about the Black Lives Matter movement in the US. — Picture from Instagram/samanthakayty

James also hit back at criticisms of her privilege by saying that she had been “insulted all (her) life for being a white girl in a local Malaysian school.”

Several people have also called for James’ crown to be revoked by Miss Universe Malaysia in light of her comments.

“Imagine comparing her white a** being scolded by her headmistress for ‘bringing Western culture to school’ with years of slavery and institutional racism suffered by black and brown folk,” wrote another.

James’ Wikipedia page was then edited by trolls who introduced her as a “racist” and “CEO of Clownery” following the backlash, and has since been edited to reflect its original content.

Malay Mail has reached out to James on Instagram for comment but she has yet to respond. Protests erupted across several US cities in recent days after the death of George Floyd, an unarmed African American man who died in Minnesota after a white police officer pinned him to the ground and knelt on the back of his neck for more than eight minutes.

A video of the May 25 incident spread like wildfire on social media, triggering anger and unrest as activists took to the streets to speak out against racism and police brutality.