TOKYO, Jan 23 — The red leaves and gold have all fallen to the ground. Swept up and collected, carried away. The branches of the trees above are bare now. Autumn is over.

The temperatures keep dropping here in Japan as winter lengthens. In Tokyo, there is no snow yet; even if there is snowfall, it will likely be light. The snow will not last for long on the city’s streets.

Further north in Hokkaido, however, it is a different story. A blanket of white. You can barely see the trees for all the snow that hangs heavy on their branches and pile up thick on the fields.

Winter in Japan is the perfect time to fill your belly with hearty foods and seasonal treats. To sip cups of hot sake and stay warm. To keep your good humour even as your teeth are chattering from the cold.

Even when we are not in Japan, what is to stop us from joining in, the best we can? After all, there is Japanese food wherever in the world you may find yourself.

There is no better way to begin, we reckon, than with nabe, a traditional Japanese hotpot dish where a basic broth, vegetables, meat and even seafood are cooked together in a clay or iron pot. In fact, the name nabe means “pot” in Japanese.

Some nabe broths are thinner, clear and consommé like, while others are stews so thick you could almost stand a spoon in it! Ingredients range from crab, a winter delicacy, in kani nabe (crab hot pot) and offal featured in motsunabe, which focuses on nutrient-dense organ meats.

To help ward off the winter cold, there are other variations of Japanese hotpot aside from a straightforward nabe. These include sukiyaki, made with thin slices of beef stir fried in suet, and every sumo wrestler’s favourite pot of protein-rich chankonabe. 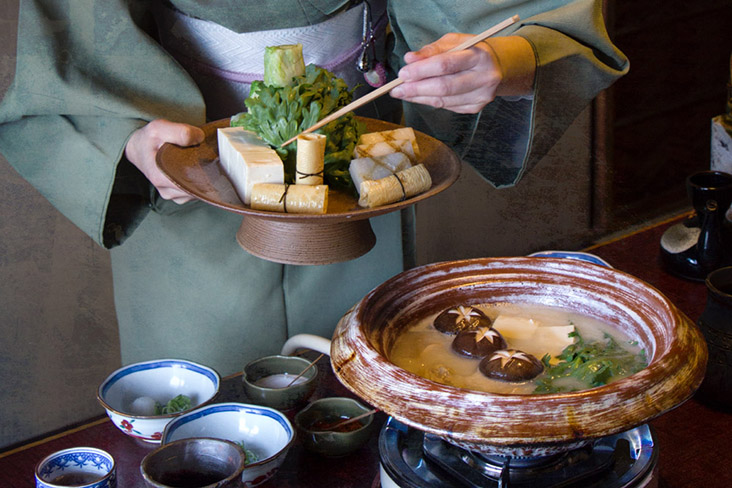 Variations of Japanese hotpot such as 'nabe', 'sukiyaki' and 'shabu shabu' help ward off the winter cold.

Then there is the ever-popular shabu shabu, which means “swish, swish” in Japanese. That is the sound you are apt to make if you are cooking your thinly sliced meat correctly: a swift back-and-forth motion in the broth before dipping in some tangy ponzu sauce or fragrant goma (sesame) sauce.

However, nabe is very much a dish meant to be eaten with others, be they family or friends. If you are not into sharing and that is understandable these days, how about oden?

It works for the solo diner but has all the glasses-fogging properties of a steaming pot of nabe. You can even enjoy oden on the go.

You select various oden ingredients from a bubbling vat typically filled with a light dashi broth made from konbu (dried kelp). For more umami, sometimes other ingredients such as bonito, dried mushrooms and dried anchovies are also added. 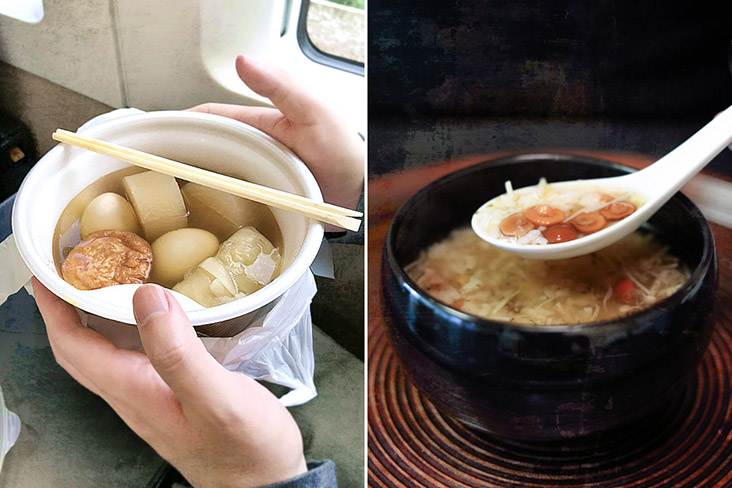 Simpler simmered fare such as 'oden' (left) and 'zosui' (right) are perfect for solo diners.

Every slurp will warm you further; indeed the contrast between the hot meal and the cold weather is as delicious as the food you are consuming.

Fans of rice need not despair. Clearly a cold piece of sushi is not particularly enticing but how about zosui? A hearty Japanese porridge that is nearly equal parts rice and water, zosui is usually garnished with chopped scallions and umeboshi (pickled plum); the tartness of the latter will bring back most frozen appetites.

Not all Japanese winter foods are so heart and belly warming, however. The season brings with it certain delicacies specific to the winter months. One such treat — or terror, depending on how you view it — is fugu or puffer fish.

This is not for the faint of heart: fugu about 200 times more toxic than cyanide. Therefore fugu restaurants and chefs require a licence to serve these thin, translucent slices of fish that have a bouncy, chewy bite. 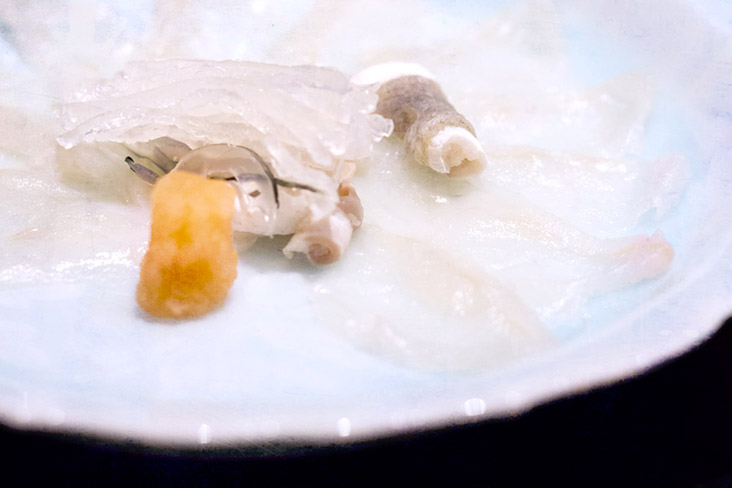 'Fugu' (puffer fish) dishes such as sashimi style 'fugu sashi' are not for the faint of heart.

Suffice to say, it is an acquired taste.

For something less life-threatening, delicate yudofu — soft slabs of silken tofu simmered in a broth made from kombu seaweed — is the epitome of Japanese vegan comfort food. Originally made by Buddhist monks in Kyoto, yudofu is a staple of meat-free shojin-ryori cuisine.

Fresh, sweet and creamy, this is tofu like no tofu you have ever tasted before. 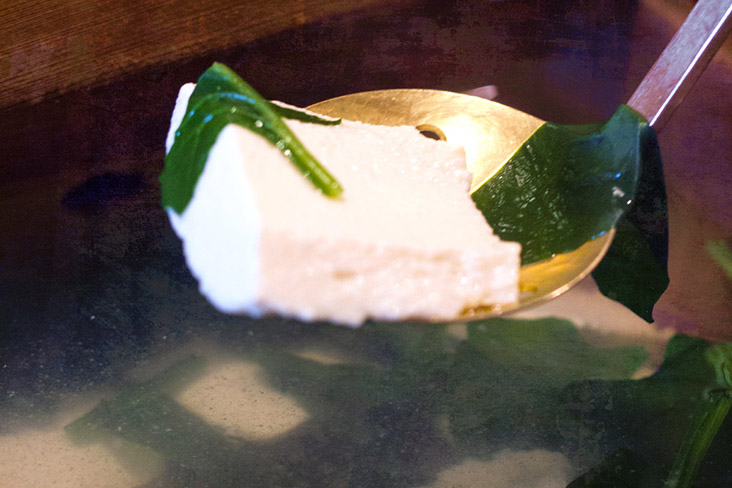 Delicate 'yudofu' is the epitome of Japanese vegan comfort food.

Of course, not all winter fare has to be so refined, even though this is Japan. Street food has a presence here. Salarymen and students alike would queue up at stalls, even when it is snowing for piping hot nikuman (steamed meat-filled buns) and yakiimo (roasted sweet potatoes), their golden flesh like a tiny sun in the middle of a snowstorm.

Desserts have their place too, especially since they do not have to be served cold. One winter sweet delight is shiruko, a sweet soup made from adzuki beans (not unlike our Cantonese hung dao tong sui, albeit thicker). 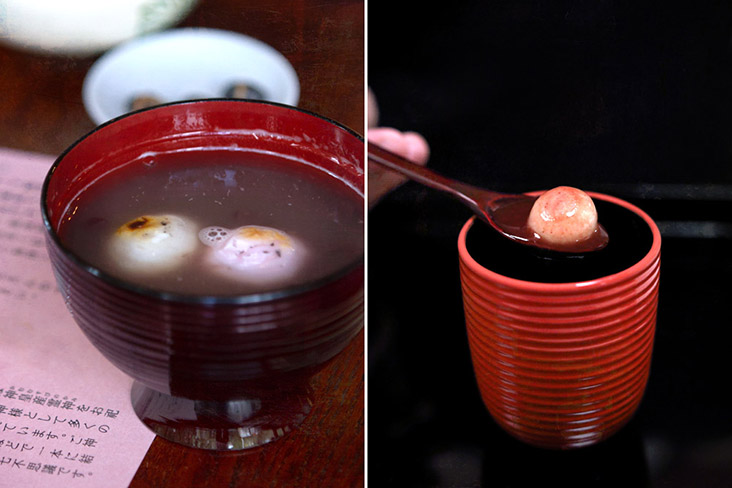 Dig deep with your spoon and you will discover tiny morsels of mochi (glutinous rice cake) balls. These orbs of chewy mochi are the perfect accompaniment to an unctuous bowl of shiruko that might be too cloying otherwise.

For a sweet ending that tastes fresher, how about some fruits? Yes, even in the depths of winter the Japanese love their fruits. Evergreen citrus trees offer a cornucopia of fruits such as mikan (a type of seedless mandarin oranges) and yuzu. 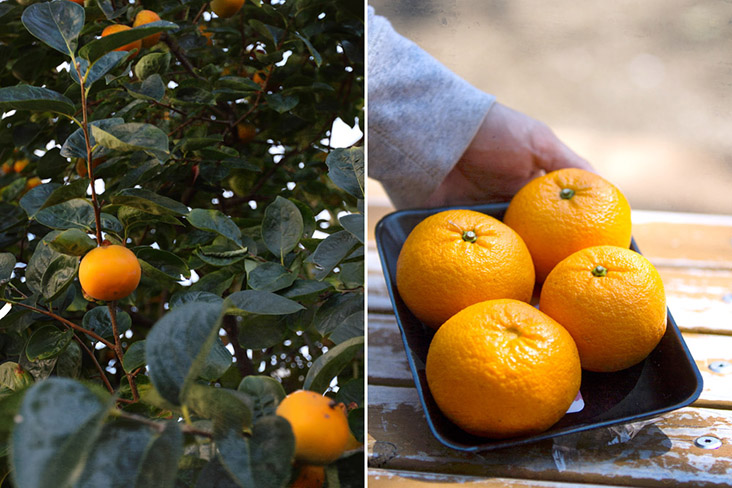 Evergreen citrus trees offer a cornucopia of fruits such as 'mikan' and 'yuzu.'

But ask any Japanese what their favourite winter fruit is and chances are their answer will be strawberries.

Oh yes. Grown in greenhouses, winter strawberries are prized in Japan; a pop of scarlet against the white of snow. They have to be deeply treasured for this fruit — typically produced in spring and early summer, from April till June — to be sought after in freezing January.v

Some are eaten fresh but most are incorporated in fancy and festive desserts such as puddings or dipped in chocolate. And, of course, in cakes. 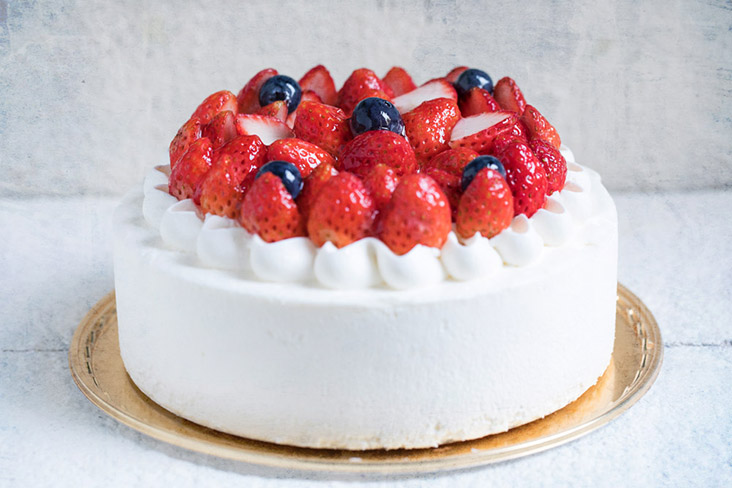 Grown in greenhouses during winter, strawberries are prized in Japan.

Nothing says winter in Japan quite like a strawberry cake — a soft sponge cake smothered in thick cream and topped with strawberries and perhaps a few other fruits. But mainly strawberries.

For it is the colours that are so cherished; red and white symbolise good fortune and happiness in Japan. Abundance. And who would not want more of that? Especially if you are enjoying such delectable food along the way?