SINGAPORE, July 2 — An espresso by any other name ought to smell as fresh. Or at least deliver the same caffeinated kick one has come to expect from brews by veteran Singaporean specialty coffee roaster and purveyor, Papa Palheta, now known as PPP Coffee.

As part of their rebranding, PPP Coffee is opening a new shop at Funan, a revamped mixed used development in the island’s Civic District. The PPP Coffee store is the group’s third outlet after their flagship shop, Chye Seng Huat Hardware on Tyrwhitt Road, and Malaysian-based Pulp at APW Bangsar.

According to the company’s CEO and founder, Leon Foo, the launch of their new store in Funan commemorates their first decade in business. 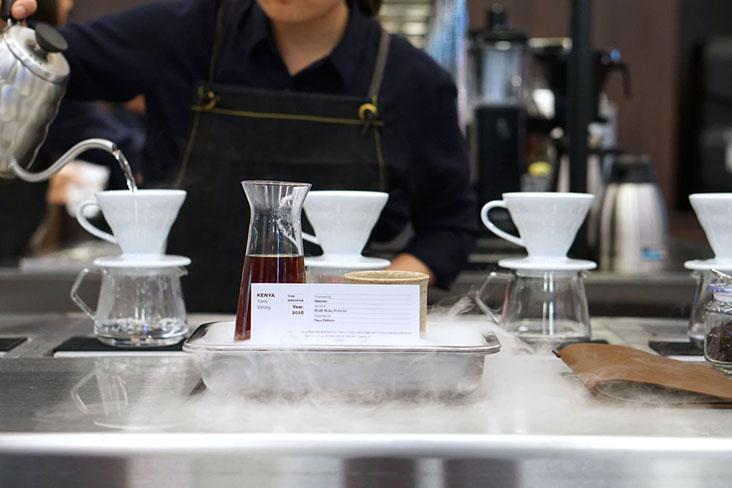 Observe baristas in action at the pour-over station.

He says: “In the past 10 years, we learnt so much about ourselves and coffee. It is through these magical interactions with our customers, partners and suppliers around coffee that led to the inception of the PPP Coffee store. We are definitely looking forward to delivering a unique experience to the coffee community.”

The PPP Coffee store promises a multi-sensory coffee experience: Expect a hands-on brew bar where customers can get geeky with a plethora of brewing equipment; a library of exceptional “vintages” of high quality roasted beans that are nitro-frozen to be “revived” and enjoyed at a later date; and even an artisanal toast bar, presumably for those who would balk at plain white bread to go with specialty coffee.

Such a rebranding exercise isn’t uncommon, particularly for a company in an industry that has seen rapid changes in recent years and increasingly lower barriers of entry. (Competitors abound, eschewing retail outlets in favour of online-only business models.)

Future plans may include expansion to new markets — China and Japan are likely candidates — where a more streamlined brand identity could prove an opportunity to tell their story and win hearts.

Co-founder Marcus Foo notes that their philosophy has not changed since they started out in 2009. He says, “We have always endeavoured to provide quality-sourced specialty coffee which are traceable and transparent for the community, both on the wholesale and retail level. At the core of our belief is to always connect people with coffee.” 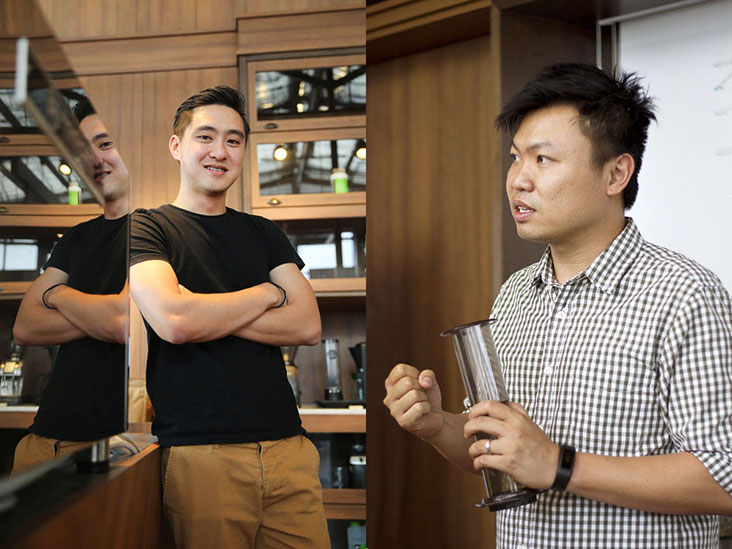 When Papa Palheta Specialty Coffee first burst onto the scene in 2009, it was a small operation where everyone on the team had multiple roles. By 2012, the business had consolidated the entire operations — wholesale, retail and training workshop. The team grew quickly and expanded to five cafés at one point, including Pulp which opened in 2014 in Kuala Lumpur.

In response to growing competition both in Singapore and Malaysia, Marcus explains that they invest most of their efforts keeping up with customers rather than standing out in a saturated market. One approach involves maintaining both an online retail presence as well as brick and mortar retail spaces.

Timing is everything, however, as the team learned. Marcus says, “Take for example our online coffee subscription program — MDC or MustDrinkCoffee — which we launched in 2012. The take-up rate was low and not many coffee drinkers were willing to buy coffee online, only a handful of early adopters. Look at things now, we buy groceries online with just a few clicks on multiple websites.”

With that lesson learned, PPP Coffee is attacking the online retail space from a different angle. The company has introduced their own range of subscription based specialty coffee-filled Nespresso® compatible capsules (also known as pods). 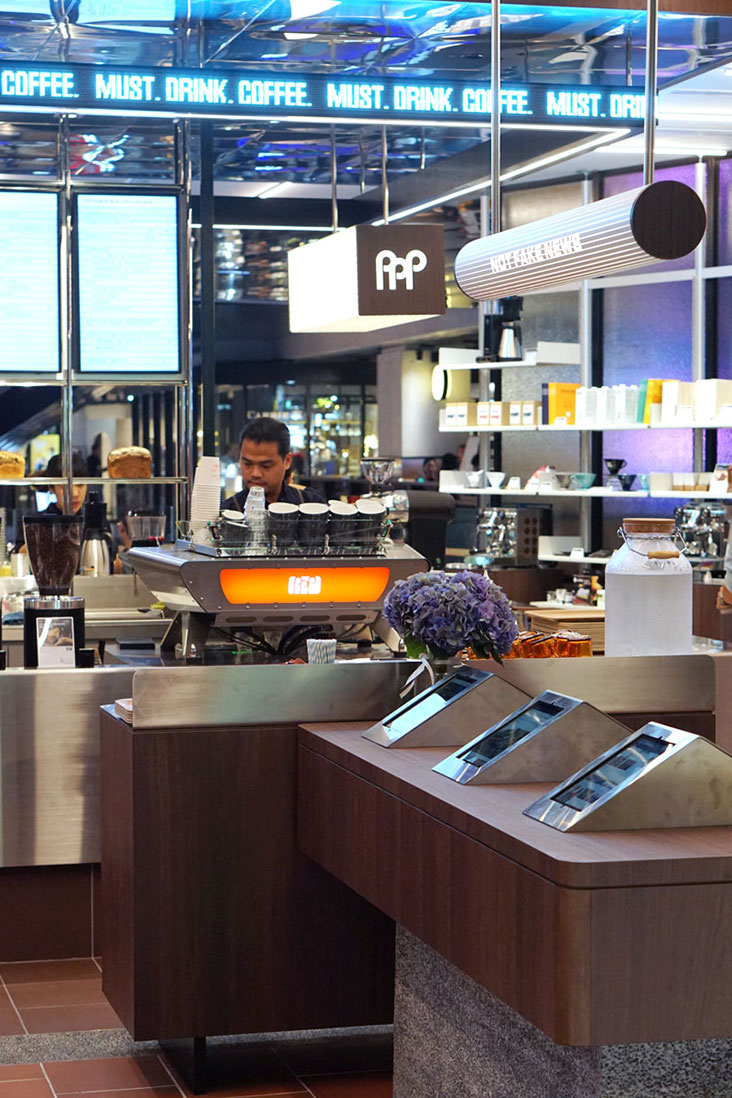 Look out for the Not Fake News stand at the PPP Coffee store.

Marcus says, “We revamped our website both for the Singapore and Malaysia markets in 2018. Coupled with our coffee in the form of Nespresso® compatible capsules, the response was beyond our expectations.

"We started to see our customers open to buying coffee and equipment online. We are taking a bet that globally, retail coffee consumption will increase dramatically and especially capsules — specialty and gourmet — will increase tremendously in the next 3-5 years.”

This pivot came hand in hand with carefully planned restructuring: by 2016, the company closed two of their cafés and focused on internal engagement. The latter meant building a strong middle management team, taking roles covering both Singapore and Malaysia. 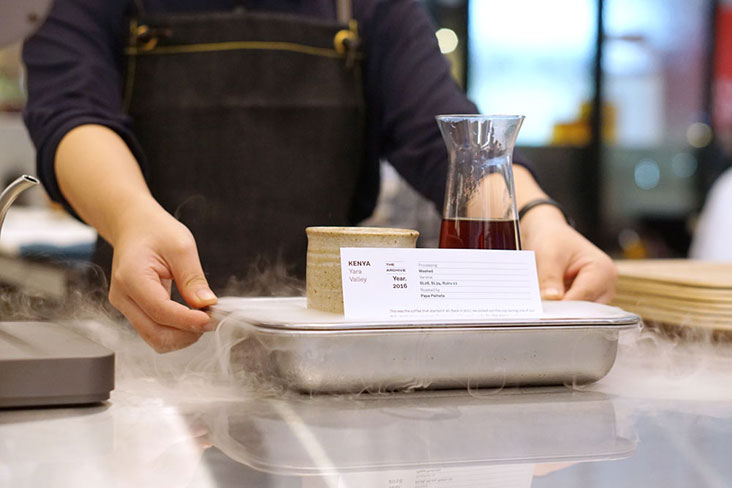 This 2016 Kenya Yara Valley is part of PPP Coffee’s archive of “vintage” beans.

Increased ownership within the group was crucial for the team to meet the challenges of running a cross-border operation with very different demographics and expectations despite similar cultures.

The result of this organic organisational sea change can be seen in their spanking new Funan store. The archival coffees – where stellar “vintages” are kept frozen below 18°C to be ground at a later date for better extraction – draw curious onlookers.

So does the felicitous Not Fake News stand, bringing subscription-based news sites directly into the company’s physical space. (Aside from coffee, design is what PPP Coffee focuses on the most; see the curvaceous island bar of Chye Seng Huat Hardware and Pulp’s movable brewing stations.) 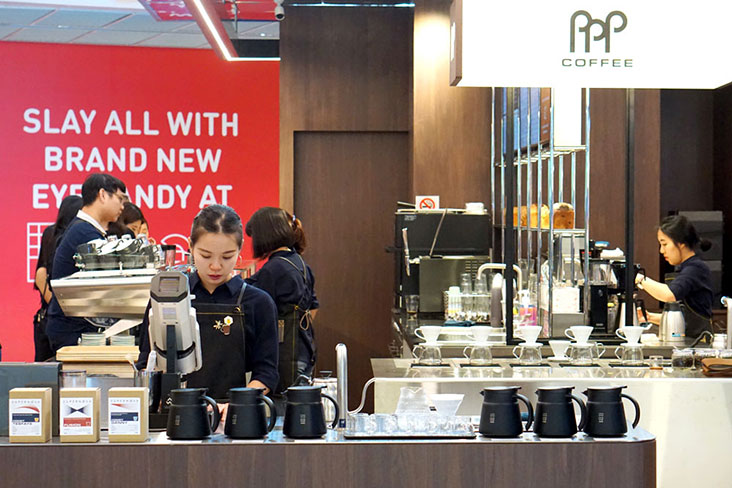 The new PPP Coffee store at Funan has a modern, metallic look.

Perhaps the biggest shift as a result of the rebranding exercise, however, is the introduction of a loyalty co-op model where profits will be shared with eligible employees who have been with the company for at least three consecutive years of full-time employment.

Leon considers this PPP Coffee’s “love-letter” to all their team; certainly makes for an innovative approach to staff retention and buy-in too.

Looking back, there’s no doubt that the cross-border relationship since 2014 has not only enabled better utilisation of the company’s talents and resources but has also helped PPP Coffee build a more cohesive regional brand and survive where others have floundered.

At the end of the day, Marcus feels it has to be about the coffee, what he terms as an affordable luxury. He says, “Over the last 10 years, we have slowly built our trust with our customers and industry peers, and began to understand what they want beyond just drinking coffee as a beverage. When we start to tell them the story of how their coffee was carefully sourced, roasted and prepared, they appreciate the value of this commodity that is taken for granted.”

* During this soft opening period, customers can enjoy their coffee at a promotional price of S$2 (RM6.10) with every toast ordered. During the store’s official opening on July 5, 2019, the store will be serving 1-for-1 coffees to customers.