PETALING JAYA, July 1 — The story of Oriental Cravings, co-founded by a band of friends — Doreen Tan, Fay Cheng and June Yap, is the stuff of inspiration for many.

Started in December 2003, the popular restaurant located at 1 Utama Shopping Centre is built on a friendship forged from a love of food.

Staying true to its roots to serve food just like at home, they pick the best ingredients for their dishes, just like how their mothers used to do. 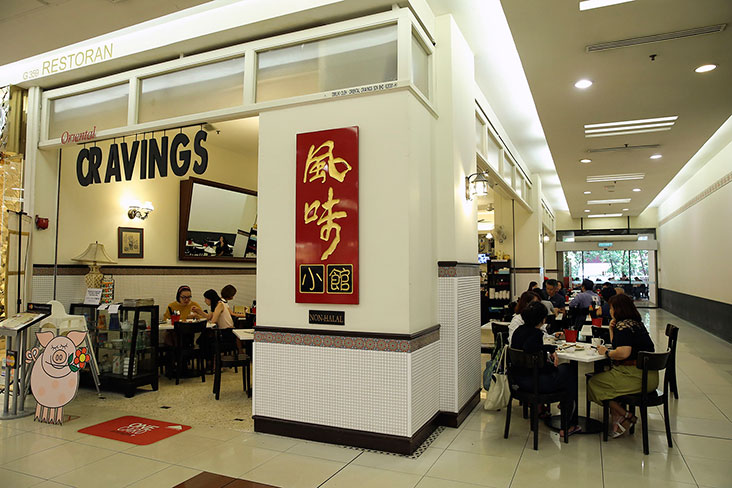 The three women had connected via the now-defunct 18-20th Centuries Restaurant in Taman Tun Dr Ismail. Started back in 1999 by June, the restaurant served Western fusion food, which was popular that time.

June came from a family of chefs, who ran a small eatery that served Hokkien char in her hometown, Rasa, Hulu Selangor. After a stint in the US, she returned to open this restaurant. The friendly staff at Oriental Cravings are at hand to recommend their specials, especially to their regulars who have been eating here from day one

The food attracted people like Fay who became a regular. Even though she didn’t have any F&B background, Fay decided to invest in the restaurant.  Unfortunately, there was a finite life for that type of food. When its popularity waned, the duo decided to try their hand at something new. This led to Oriental Cravings.

For their new venture, they roped in Doreen. Like Fay, she had also transitioned from a customer to become close friends with Fay and June. The trio decided on something they felt was lacking in the food scene.

“We decided to concentrate on dialect food that we grew up with and what we ate as children,” explained Fay. At that time, restaurants serving non-halal fare was a rarity too. “We knew we wanted to do something with pork as last time, nobody talked about doing a non-halal restaurant.” To their surprise, the mall’s management was also open to allow this kind of restaurant on their premises. 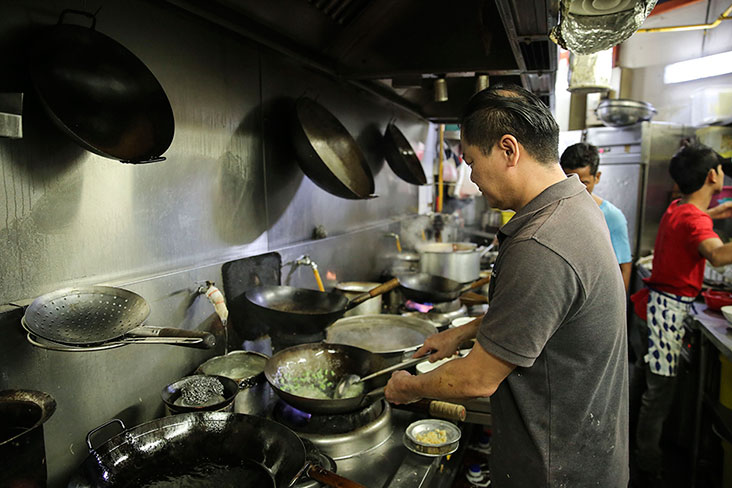 The stir fried yam is cooked up using a hot wok with egg, long beans and dried shrimps, as inspired by chai tow kuih

Thanks to the trio’s diverse backgrounds, this has given birth to a varied menu, rich with heritage. Fay has a Hainanese and Cantonese background, while Doreen is of Heng Hwa heritage and June is Hakka.

They also work well with their chef who has been with them from Day One of their operations. He is instrumental in making these home-style eats with a more commercial twist. In the menu, you’ll find a slant towards Hakka dishes, like vinegar pork trotters and char yoke. Fay explained to us, it’s more to cater to the KL crowd who are predominately from the Hakka clan.

The trio have remained faithful to their menu. Updates are rare, unless it’s to remove unpopular items. On a daily basis, there’s various specials, to spice up the variety, especially for their regulars who often just ask for their recommendations. 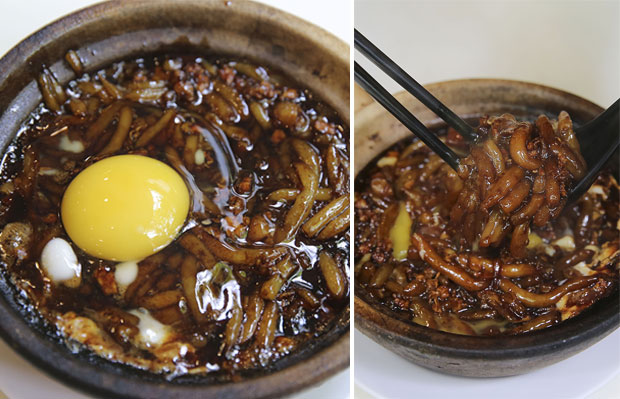 Their claypot loh shee fun has been their bestseller since they introduced it (left). Mix the raw egg with the piping hot rice noodles and enjoy it with minced meat and salted fish (right)

Occasionally, depending on what their customers request, they’ll introduce dishes via their specials. If it’s popular, it’s kept on. Most times, they also look at their space constraint since they’re located in a shopping mall, where space is at a premium.

One of their signatures is the yam cake filled with chunks of yam, pumpkin, waxed Chinese sausages, minced pork and dried shrimps. “It’s Doreen’s mother’s recipe which is really nice so we featured it in our menu and it’s our main draw,” explained Fay. Previously Doreen’s mother ran a small stall selling the yam cake, kuih angku and drinks to supplement their family’s income. Her sour plum kasturi drink is also in the menu, a nice piquant refresher for a hot day.

The restaurant also offers an improvised variation of the yam cake, where they’ll stir fry cubed yam cake with egg, long beans and preserved radish. It’s a great way to enjoy a different perspective of the soft, savoury cake that is topped with peanuts and crispy dried shrimps. This dish arose from the necessity to use up the yam cake. “You know in those days, we won’t throw things and we probably got the idea from chai tow kuih,” said Fay. 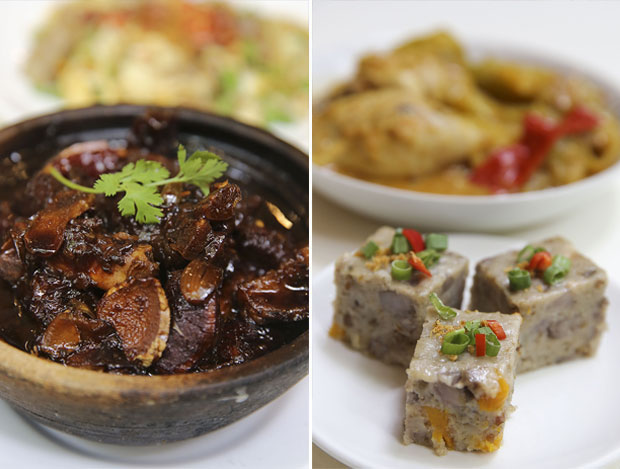 Ugly delicious: Vinegar pork trotters, pepped up with dried chillies that tempers out the sweet and sourness of this dish (left). The signature yam cake is made from a recipe passed down to Doreen Tan from her mother who used to sell this at her food stall (right)

Another popular dish is their slightly sweet, gingery rice wine chicken served with homemade wine, wood ear fungus and fluffy omelette. Opt for rice or silky mee sua, to enjoy this fragrant, tummy-warming dish. As the trio grew up with this dish which they all liked, they decided to put in the menu to test it out.

Popular also as a confinement dish, it’s transcended to become a crowd favourite for many including men! Fay explained, “We tell them it’s an acquired taste and they’ll tell us that they tried it before when their wives were in confinement and they like the taste of it.”

What makes the difference is the rice wine is from a trusted source who is 70 something. Should that person retire, Fay tells us, they will have to source for another supplier. The other crowd pleaser here is vinegar pork trotters — boneless trotters cooked with two types of vinegar. Their chef, who is Hakka, adds his own touch to the traditional dish by adding dried chillies, where that slight heat tempers out the sweetness and sourness perfectly and gives it a more robust flavour.

Recognising a need to broaden their food offerings, they also added a crowd favourite of that time, the claypot lou shee fun. Fay explained, “At that time, we kept hearing everyone talking about nga poh (claypot) lou shee fun, so we wanted to add something that people liked. We just added it in the menu and it flew.” 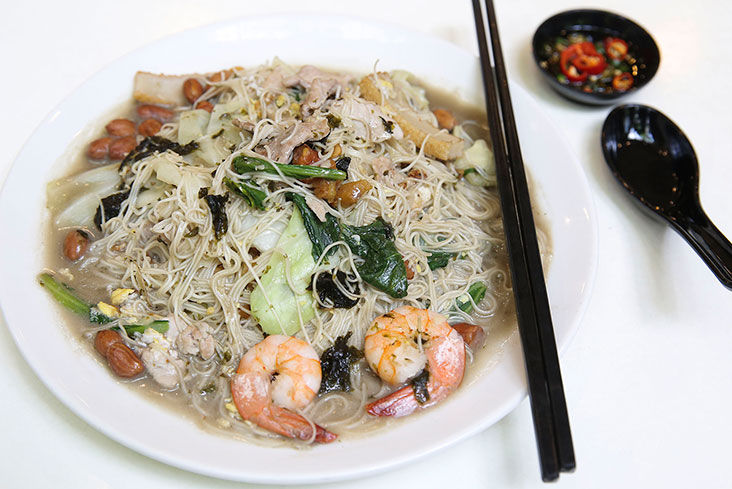 A nod towards one of the owners, Doreen Tan’s Heng Hwa heritage is these braised mee sua noodles

The Oriental Cravings version is delivered piping hot to the table with a raw egg (optional) cracked on top of the rice noodles cooked with dark soy sauce and minced meat. The hidden twist... fragrant salted fish that upped the dish’s deliciousness. Since its introduction, it has been their best seller.

Another popular must-eat here is the roast pork curry laksa. You’ll be surprised to discover that the roast pork is made in-house, in limited quantities, using an electric oven... just like at home. “We refuse to use gas, because as we’re paranoid about the carcinogens with gas. We’re doing things like how we do at home.”

You’ll also find some unusual dishes culled from their family recipes. For instance, the chicken curry is served with ham choy. Before you shake your head against such an unusual pairing, try it. You’ll find that the preserved Chinese mustard greens balances out the richness of the curry.

It’s a dish cooked by Fay’s mother, passed down from her grandmother. As her mother has died, Fay recreated the dish with her chef, using her taste memories from her childhood. Similarly, a house specialty here features a one-of-the-kind match — stir fried lotus root and petai (stink beans) with French beans, minced pork and bird-eye’s chillies — from Fay’s childhood.

Lovers of the green stink beans will be happy to see that often ignored ingredient being celebrated in many dishes here, as it’s well loved by the trio. Their superb sambal petai with ikan bilis is paired with fluffy egg while petai is also found in their dishes like fried kway teow, fried rice and as a topping for fried fish. 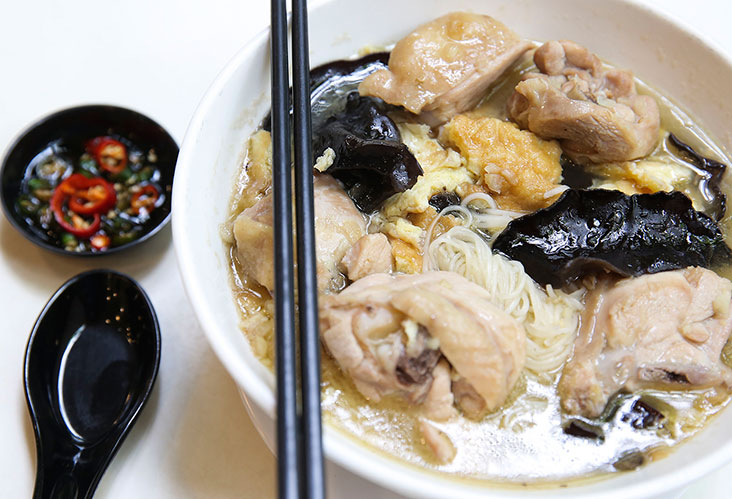 You will be surprised but their rice wine chicken served with mee sua noodles is popular with men!

When Chinese New Year rolls in, regulars look forward to their pomelo salad. The refreshing dish uses a particular type of pomelo from Tambun, only available during that time. “It’s very different, more crunchier and sweeter,” explained Fay.

It’s their version of yee sang, born out of necessity since they don’t have the space to store the ingredients for the typical yee sang. You’ll find the raw element with the pomelo, while the fish is replaced with dried prawns. Dressed with a refreshing mix of lime juice and fish sauce, the pomelo is garnished with sliced torch ginger flower (bunga kantan) and kaffir lime leaves that add a punchy taste.

There’s also lap mei fan or Chinese waxed meats rice, served in a single person portion, to look forward during this festive season. Usually served in a pot to be shared with people, they have many customers who came in alone who wanted to taste it, hence the introduction of this version.

While restaurants serving traditional food, especially non-halal ones, have mushroomed all over the Klang Valley in recent years, Oriental Cravings still pulls in the crowds. What keeps it going and being on top of its game, is their steadfastness in serving quality ingredients.

“Over here, ingredients-wise, we’re very particular about what we get. We always get first pick.” This applies to their fish and even their prawns. For instance, they refuse to take the easy way out by buying pre-peeled, frozen prawns. Fay explained, “We refuse to budge in the sense. We want to do it just like how we serve it at home. As far as we can, we want to serve the best ingredients we can get.” An unusual family recipe from Fay Cheng is this ham choy chicken curry, just the way her mother used to serve at home

Keeping to their old fashioned values, the restaurant’s showpiece is a wall of black-and-white photographs. Fay tells us there’s no pictures of them since the trio are camera-shy. Instead, it’s a compilation of friends and family, as she points to a married couple, telling me that they just died. It’s not noticeable, but there’s a group of women in the centre ­— the trio’s mothers — a fitting, quiet tribute to the ladies who taught them these delicious home-style dishes, that they are bringing to all of us.

Regulars will be pleased to know that there are no plans to move from its present location. “We like it here. The mall likes us. There’s a good working relationship,” explained Fay. For the menu, Fay is not ruling out giving some nip tuck to their dishes. “Depends. We might. Never say never.” She reassures that the overall theme will still remain the same. “Home style cooking is the heart of it as we find there’s an acute shortage of that here,” she said.

A secret and a surprise: Head to Kews Pâtisserie in Taman Desa for vegetarian ‘nasi lemak’, Biscoff ‘mochi’ danish