NHS workers with a banner react at the Nightingale Hospital during the Clap for our Carers campaign in support of the NHS, following the outbreak of the coronavirus disease in Belfast, Northern Ireland, May 7, 2020. — Reuters pic
Follow us on Instagram, subscribe to our Telegram channel and browser alerts for the latest news you need to know.

The coronavirus pandemic may have exacerbated global tensions, especially between the United States and China. But in some cases it has also sparked cooperation between long-time rivals.

In one ray of light amid the gloom, Northern Ireland’s unionist Orange Order last month secured a shipment of personal protective equipment for distribution both north and south of the border with the Republic of Ireland.

That was highly unusual as unionists, who want Northern Ireland to remain part of the United Kingdom, are usually wary of cross-border cooperation, seeing it as a gateway to Irish unification.

But the Belfast executive, which includes unionists, also signed a non-binding deal with Dublin to beef up cooperation.

“Facing that challenge will test us as never before.”

His comment echoed the words of Israeli historian Yuval Noah Harari, who argued in March that “both the epidemic itself and the resulting economic crisis are global problems (requiring) global cooperation”.

Writing in the Financial Times, Harari warned that “a collective paralysis has gripped the international community” as the world faces a choice between “nationalist isolation and global solidarity”. 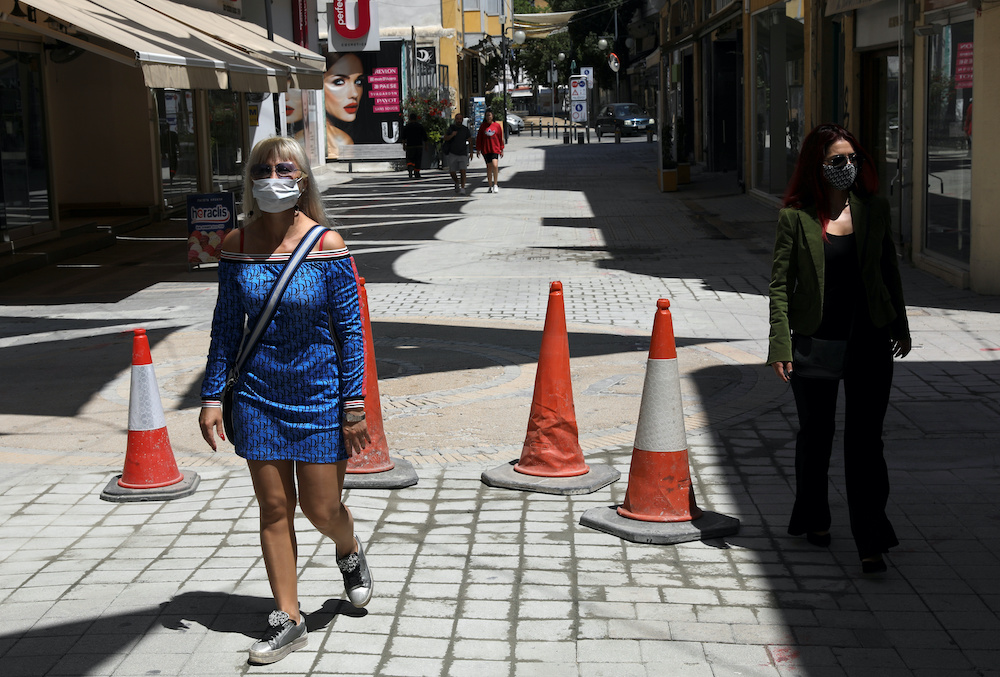 People wearing protective masks walk on the first day of easing of the nationwide lockdown against the spread of the coronavirus disease, in Nicosia, Cyprus, May 4, 2020. — Reuters pic

Calls by United Nations Secretary-General Antonio Guterres in March for a “global ceasefire” also appear to have fallen on deaf ears, with fighting continuing in battlefields from Libya to Yemen.

Yet in some cases, the need to fight the virus has trumped old rivalries.

On the divided island of Cyprus, the government last month sent 4,000 items of protective equipment and 2,000 chloroquine tablets across the UN-guarded ceasefire line to help the breakaway north.

It was a rare act of goodwill between the EU member and the Turkish Republic of Northern Cyprus, recognised only by Ankara.

Cyprus has been divided since 1974, when Turkey invaded the northern third of the island in response to a Greek-backed coup.

But the delivery, nearly three years after peace talks collapsed, came under fire from nationalist politicians.

Prime minister Ersin Tatar accused TRNC president Mustafa Akinci of breaking customs regulations and argued that “if we need something, we request it from Turkey”.

The health minister in the north, Ali Pilli, begged to differ, telling news channel BRT TV that “no matter where (the aid) comes from, we accept it”. 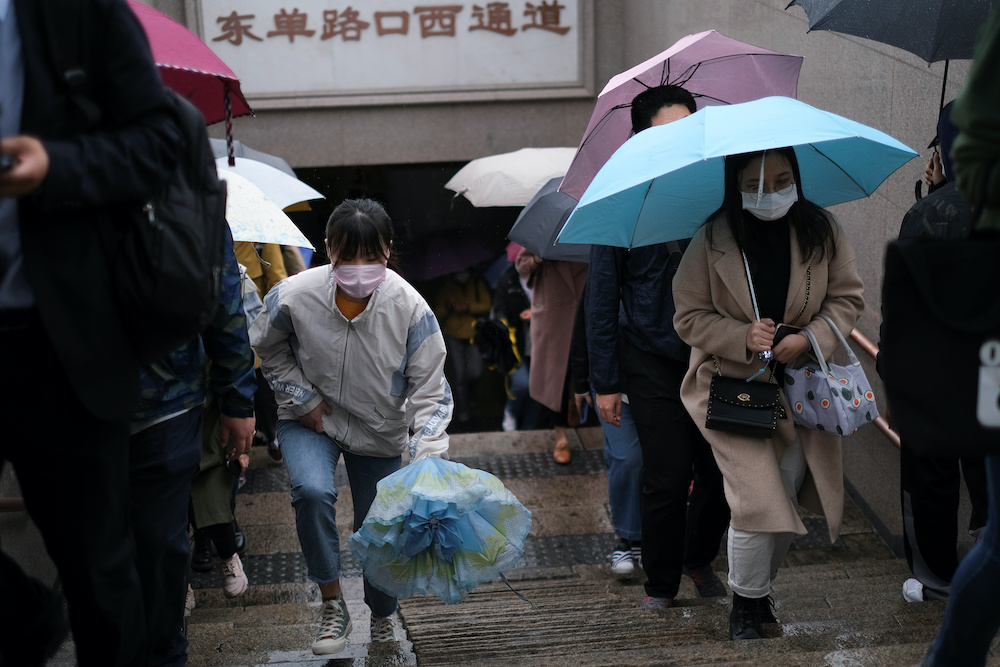 People wearing face masks exit a subway station during a rainy day, following an outbreak of the coronavirus disease, in Beijing, China May 8, 2020. — Reuters pic

Earlier in the year, as the Covid-19 illness ravaged China, Japanese businesses and the government donated thousands of protective garments.

Chinese social media users hailed the gifts, and Beijing’s foreign ministry said it was “extremely touched” — a far cry from the bitterness often overshadowing their relations since before World War II.

As in other cases, this generosity may have been partly motivated by pragmatism.

As regional expert Victor Teo told AFP, “it is definitely in Japan’s national interest that the health threat remains contained.”

Broader geopolitical trends may also have played a role. Richard McGregor, a senior fellow at the Lowy Institute, pointed out that China was “always more solicitous to Japan” when tensions rise with Washington.

The pandemic has also inspired unusual gestures in the Middle East.

The United Arab Emirates evoked the virus as part of its outreach to the president of war-torn Syria, Bashar al-Assad, for years shunned by Arab governments.

No aid deliveries to Syria have yet been reported.

But the UAE did dispatch a military plane in March carrying UN medical experts and aid to Assad’s ally Iran — despite the fact the Emirates are allied with Washington against Tehran. 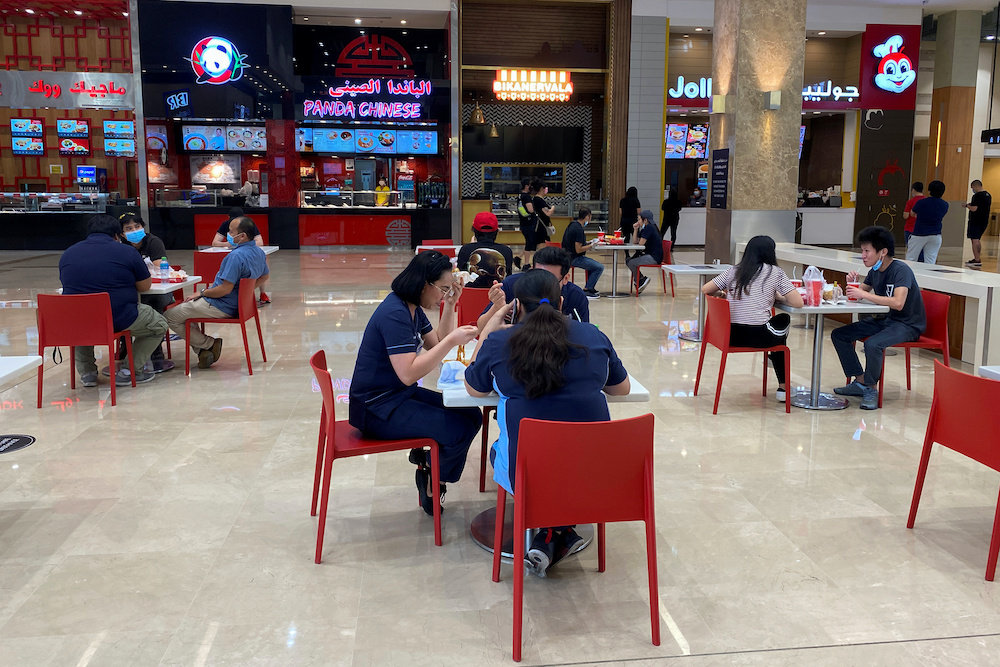 People eat in the food court at Dubai mall after the UAE government eased a curfew and allowed stores to open, following the outbreak of the coronavirus disease in Dubai, United Arab Emirates May 3, 2020. — Reuters pic

‘In the firing line too’

The help for Iran, hit by the Middle East’s deadliest outbreak, was all the more remarkable as it followed heightened tensions in the Gulf.

Recent months saw attacks on shipping, the downing of a US drone and the American killing of a top Iranian commander that had sparked fears of regional war.

But senior Emirati aid official Sultan Mohammed al-Shamsi said that “aid should reach all people regardless of their background.”

Iranian Foreign Minister Mohammad Javad Zarif thanked the UAE, calling the pandemic a “global issue that requires the combined will of all countries to be defeated”.

Michael Stephens, of the RUSI think tank in London, noted that “aid diplomacy is a big thing in the Islamic world”.

But he also pointed at self-interest. Despite their disagreements, the UAE and neighbouring Iran have close trading links, and tens of thousands of Iranians live in Dubai.

“I think the deliveries were pragmatic more than anything else -- if your neighbours get the virus, you’re in the firing line too,” he said.

Moreover, he added, “anything that lowers tensions is a good thing.” — AFP