This picture taken on December 29, 2020, shows a partial wide-angle view of the Doha Stadium. Away from the lavish air conditioning and hand-manicured turf of Qatar’s World Cup Stadiums, two of which will soon host the world’s best clubs, sits Doha Sports Stadium. — AFP pic
Follow us on Instagram, subscribe to our Telegram channel and browser alerts for the latest news you need to know.

DOHA, Feb 1 — Away from the lavish air conditioning and hand-manicured turf of Qatar’s World Cup Stadiums, two of which will host the world’s best clubs from Thursday, sits Doha Sports Stadium.

The modest ground, the first in the Gulf with a grass pitch, nestles in the heart of the old city flanked by low-slung concrete villas, Doha’s modest inventory of dive bars, and a bus station.

Despite its deceptively simple exterior of low walls it has hosted footballing titans including Pele as well as boxer Muhammad Ali, known as Cassius Clay until 1964, since opening its doors in 1962.

“This stadium means a lot to me. I grew up in this stadium. My start was on this stadium with the big stars,” said retired Qatar and Al-Sadd star Hassan Mattar.

“It started here very beautifully at that time.”

Four floodlights tower above the modest neighbourhood which is a far cry from the skyscraper hotels and office blocks clustered together on the opposite side of the West Bay.

A vintage yellow post box speaks to the district’s history, a stone’s throw from the coast and a dhow harbour as well as the Bidda area which has served as the ruling Al-Thani dynasty’s seat of power.

The venue is open-air except for a small pavilion containing the VVIP toilets reserved for the great and the good of the emirate and beyond. 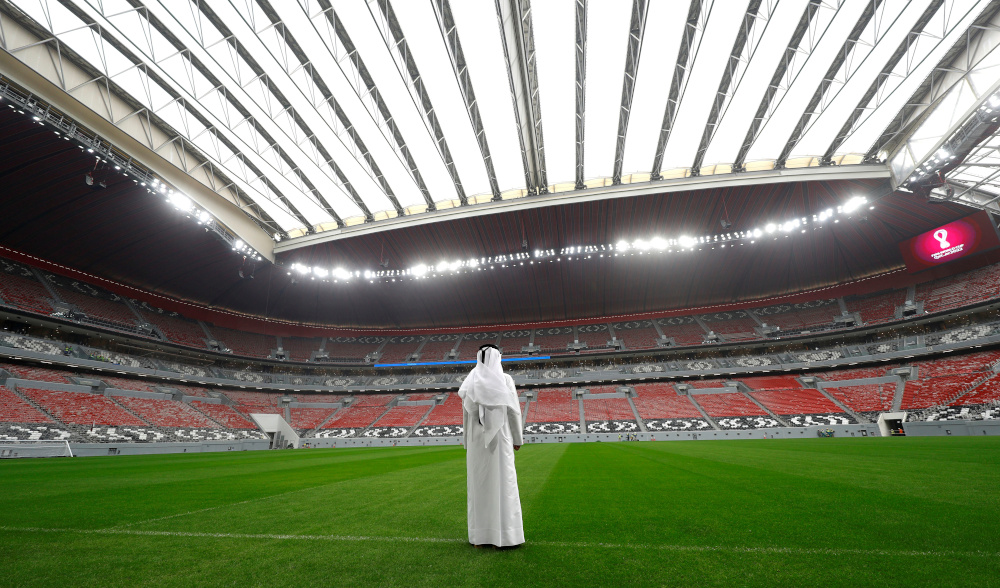 By contrast, 60,000-capacity Al-Bayt stadium which will host World Cup matches in 2022 features hotel suites with views of the pitch and balconies in the stands.

“This was the main stadium in Qatar, and in those days the fans filled the stands,” Mattar said of Old Doha Stadium’s 4,000 capacity. “I have fond memories. This stadium was the only grass planted in the Gulf countries.”

Mattar said that seeing the likes of Pele on his home turf had inspired him and many other Qataris, leading to the country’s modern-day infatuation with football.

At the Khalifa Stadium 15 kilometres west, which opened in 1976 and will host World Cup games in 2022, groundsmen would “touch up” the turf with green paint to help overcome the brutally hot Gulf summers.

“Switching from this stadium to the new stadiums, yes, there is a huge difference,” said Mattar.

Now Doha Sports Stadium wants for nothing and has received the support of Qatar’s former ruler, the Father Emir Sheikh Hamad bin Khalifa Al-Thani according to those involved in the venue.

But its vintage appeal and understated heritage value have been eclipsed by Qatar’s seven new-build stadiums in recent years.

Criticisms of worker welfare on those projects and the environmental cost of air conditioning each of the open-roof stadiums which will host 2022 matches have dogged the jewels in Qatar’s World Cup crown.

Another criticism of Qatar’s hosting of the global football spectacle next year is that the country has limited footballing history and even more limited competition credentials.

A clutch of faded but proudly displayed photographs in the Doha Sports Stadium’s pavilion speaks to a modest but distinct footballing tradition which pre-dates the glitz and glamour of Qatar’s petrodollar-fuelled international sporting ambitions.

“We used to go up to the stadium fence and put stones under our feet to watch matches,” said local sports historian and journalist Sultan Jassem.

“As children, we didn’t have money. When big stars like Pele, Clay and (Michel) Platini came along we were dreaming and in awe,” he added, thumbing a black and white photograph of Ali at the venue where a ring was erected on the pitch, a stop on the The Greatest’s tour of the Middle East before fighting Joe Frazier.