SINGAPORE, Dec 26 — Born in the 1990s, I grew up watching Steve Irwin, known as the Crocodile Hunter, every week on television and saw him as a hero for wildlife conservation.

Recently, I came across a YouTube video by Australia Zoo created to commemorate Steve Irwin Day on Nov 15. It consisted of interview sessions with various zoo team members.

Thereafter, I could not help but spiral into cycles of re-watching documentaries of Irwin such as The Crocodile Hunter and Croc Files, and reading websites and books on his legacy again and again.

Why was Irwin, who died in 2006 after being struck in the chest by a stingray barb, a longtime fascination for me?

First, he displayed such passion and zest for his work that inspired me and kept me going even during my darkest days.

In Primary Four, I fell very sick once with gastroenteritis. I felt so lethargic that I would simply curl up in bed to sleep, wondering if I would ever be able to open my eyes again.

Well, my mother made sure I did, with newly bought video CDs on Irwin’s adventures that I could look forward to watching.

I would bounce out of bed with my eyes glued to the television screen for at least an hour to watch him in his zoo and in the wild.

It was astonishing to see how he described animals including snakes, crocodiles and alligators as “gorgeous” and “little beauties”, when they were gnarly-looking, ferocious and possessed extreme killing power.

His enthusiasm was highly infectious, so much so that I quickly recovered to return to school, and tried to replicate his levels of energy and gusto for my schoolwork.

Secondly, he helped me develop curiosity and an eye for observation from a young age.

It was after watching his documentaries that I decided to join the Young Scientist Badge Programme by Science Centre Singapore, to learn how to identify different types of animal species.

Along the way, I not only learned that ornithologist referred to someone who studies birds but gained knowledge about common bird species in Singapore such as the myna and koel. 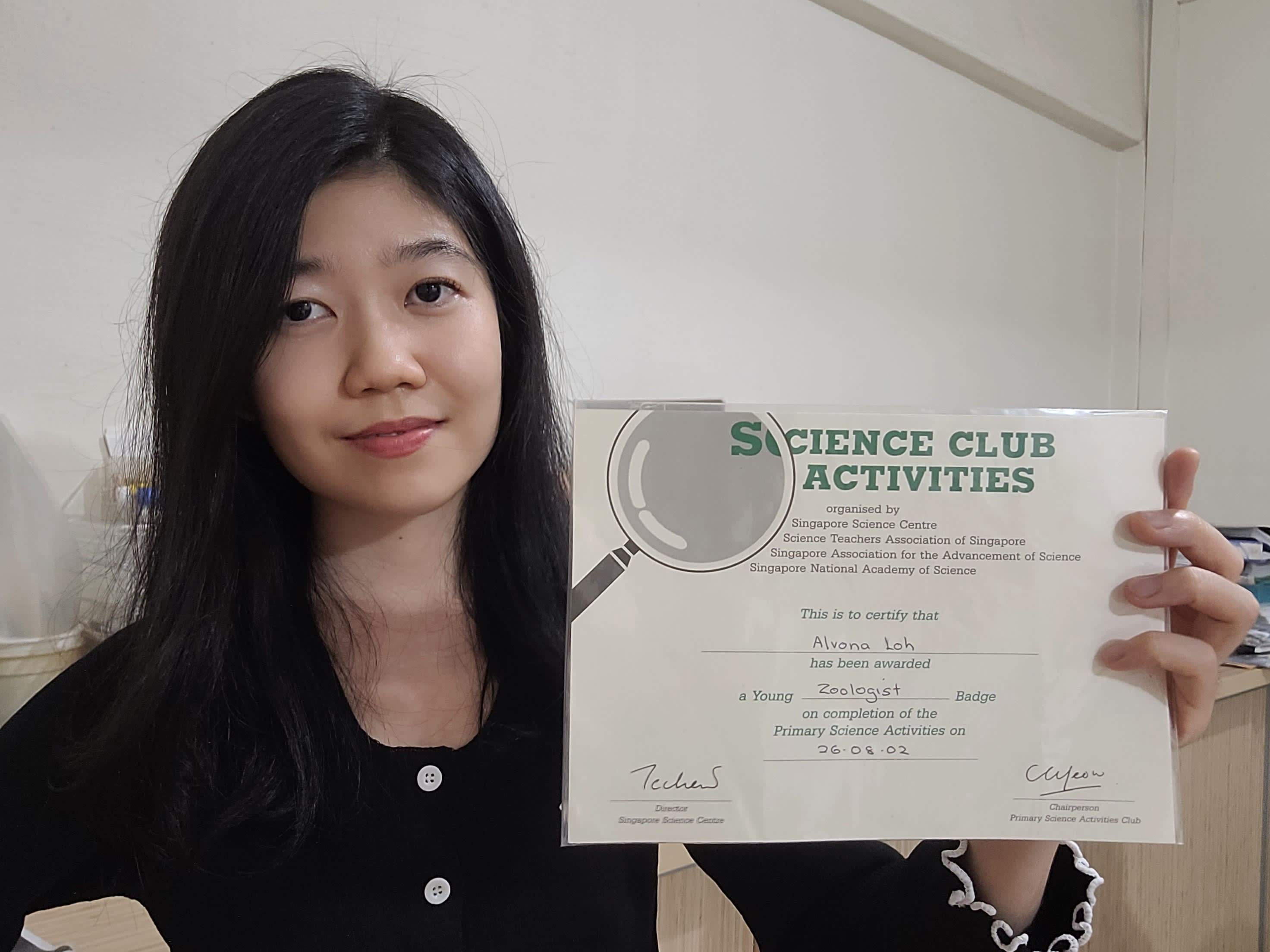 The author with a certificate of her participation in Science Centre Singapore’s Young Scientist Badge Programme in 2002. — Picture courtesy of Alvona Loh Zi Hui

Amazed by how Irwin could so quickly tell a snake’s species by looking at its size, shape and skin patterns, I wanted to develop a sharp eye for detail as well.

By 11, I was a voracious reader, including on crocodiles and how to differentiate freshwater from saltwater ones through their physical attributes.

Keen to get up-close to nature, I would visit the Singapore Zoo and Sungei Buloh Wetland Reserve every year, and also go to the Ang Mo Kio Town Garden West near my home twice a week while in primary school.

I have spotted and sketched animals and insects during those trips.

My observation skills then translated into an interest in science when I first peered into a microscope to look at human cheek cells, plant cells and micro-organisms such as bacterium E Coli.

Even now, in my work as a doctor, I continue to apply observation skills which involve keeping my eyes peeled for signs and symptoms in patients, as well as being able to identify different parts of the human anatomy.

This sense of wonder instilled by observing and appreciating the physical world and its inhabitants is undoubtedly a by-product of watching Irwin’s adventures.

Thirdly, Irwin helped me develop empathy and understanding towards others.

My favourite episode of his documentaries is titled “Crocodile of the Revolution”, which showed how he led his team to save two saltwater crocodiles in war-torn East Timor.

Both crocodiles were living in dismal conditions. In particular, the rescue of the male crocodile that Irwin named Anthony was highly memorable for me.

Irwin and his team felt very sorry for Anthony, a 4m crocodile confined in a 2.5m by 2.5m concrete box for 13 years.

Determined to help, Irwin moved it to a separate enclosure after a lot of struggles with restraining and capturing the powerful creature.

What stood out for me in the episode was that crocodiles are considered sacred animals in East Timor, as East Timorese believe that their land is a solidified crocodile.

Some also kept snakes in tiny cages as pets. But cramped cages resulted in the snakes having flattened heads.

Irwin explained to the locals that the snakes felt pain like he did, but could not cry like he could, and encouraged them to release snakes into the bush.

Irwin also cared for his team mates such as Wes Mannion.

In one episode of The Crocodile Hunter Diaries, he took turns with Mannion to look after a pregnant reticulated python round-the-clock so that both men could get adequate rest.

These moving moments remain engraved in my heart as they revealed Irwin’s love and respect for animals and men. 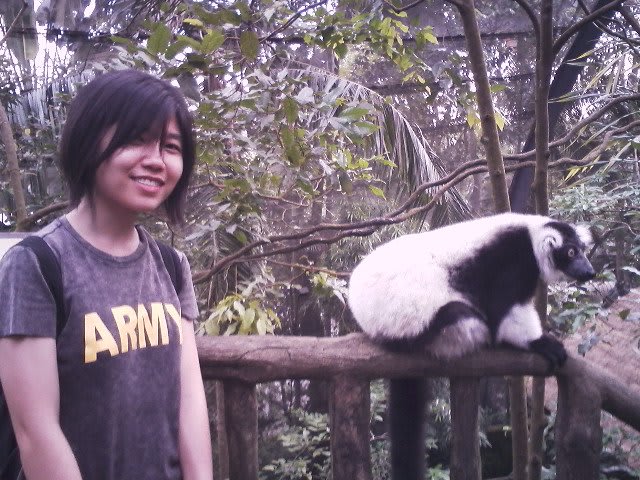 The author with a white-belted ruffed lemur on a visit to Singapore Zoo when she was 18 years old. — Picture courtesy of Alvona Loh Zi Hui

Recently, otters in Singapore attacked a man in the Singapore Botanic Gardens. Some have raised concerns about the growing otter population, but many are divided on how to prevent similar incidents.

In an analogy, crocodiles in Australia are known to attack humans and also cause distress to farmers by eating livestock.

To prevent these crocodiles from being shot by humans, Irwin used several strategies.

He would relocate them to his zoo (such as in the case of Bindi, a female crocodile he caught from the wild) or he would capture and release them into an area away from humans.

Other methods he used include behavioural conditioning, in which he would capture, hold and harass the crocodile to instil a behavioural deterrent against interaction with humans.

This method was used on Old Faithful, a crocodile which stalked frightened fishermen and tourists.

Irwin exposed it to noises from boats and spotlights before releasing it into its same crocodile territory.

This was done so that Old Faithful would exhibit “people-shyness” by associating its undesirable capture with human noises and lights.

Irwin also advocated for a preventive approach. In blogpost Crocodile vs People, he emphasised the importance of preventing mistakes such as swimming with or feeding crocodiles from occurring.

When visiting Mexico in a documentary episode “Crocs in the City”, he pointed out that street signs demarcating crocodile territory to warn people not to enter was simple, but life-saving.

With Singapore having an issue with potential harm inflicted on men by otters, I hope that passionate, empathetic and knowledgeable wildlife experts would chime in on how to best handle the issue.

This is so that all of us can live safely and in harmony with nature as far as possible in a world plagued by habitat loss and devastation: A message which Steve Irwin tried to spread in his lifetime. — TODAY

Alvona Loh Zi Hui is a junior doctor who works at a public hospital in Singapore.

Why is monkeypox spreading around the world and should Singapore be concerned?