Thursday, 05 Nov 2020 8:41 PM MYT By Player's Blog
Follow us on Instagram, subscribe to our Telegram channel and browser alerts for the latest news you need to know.
By Player's Blog

NOVEMBER 5 ― When nine Asian golf stars take the famous drive up Magnolia Lane for the upcoming Masters Tournament, they could well find a dose of inspiration from the success story of Korea’s trailblazer KJ Choi, who has come closest to donning the coveted green jacket.

Choi, who turned 50 earlier this year, has enjoyed a love affair with Augusta National since making his debut in the fabled tournament in 2003, and has been heart-broken following some close shaves, which include a career best third place finish in 2004 and two other top-10s in 2010 and 2011. His impressive Masters record and well-documented rise to fame on the PGA TOUR will be a fresh reminder to the Asian brigade that anything is possible in this wonderful game.

For over two decades, the Korean legend, who is nicknamed “The Tank” for his single-mindedness towards the game, has paved the trail for Asian golf with his incredible journey that began in Wando Island, Korea, where he grew up in a farming family, and ultimately landed at the golfing mecca known as the PGA TOUR.

As simple as it sounds, all it took Choi was endless hours of hard work, unflinching dedication and a dash of good fortune to truly savour what is now a stellar career for others to emulate. Famed for coining the phrase “To be the best, you’ve got to play with the best,” Choi is most successful Asian golfer on TOUR to date with eight career victories, including the TOUR’s flagship event, THE PLAYERS Championship, 68 top-10s and over US$32 million in prize winnings.

“When I first came to play in the U.S., I questioned if a Korean player could win on the PGA TOUR. To be honest, most of my thoughts were negative thoughts, but I pushed and worked hard to reach my goal. I look back at my career now, and there are really some records to commemorate and I’m very honored and proud of my achievements on TOUR,” said Choi.

The Masters Tournament tees off in an unfamiliar week from November 12 to 15 due to scheduling changes caused by COVID-19 and will see four Koreans ― Sungjae Im, Byeong Hun An, Si Woo Kim and Sung Kang – being joined by Chinese Taipei’s C.T. Pan, Thailand’s Jazz Janewattananond, Japanese duo Hideki Matsuyama and Shugo Imahira and China’s reigning Asia-Pacific Amateur Championship winner, Yuxin Lin. From this group, Matsuyama has the best track record at Augusta National, with a fifth place in 2015 and tied seventh in 2016 being his best finishes.

Choi’s advice to any aspiring golfer is simple ― work harder than the others.

“There are a few things that people talk about when they think of KJ Choi, such as KJ changing grips and having success, always wearing visor caps, and so on,” he said “Of all these words, the phrase I like best was, ‘KJ Choi, he worked really hard.’ I like this saying because people acknowledge that I have worked hard in my entire life. I think that is my legacy. 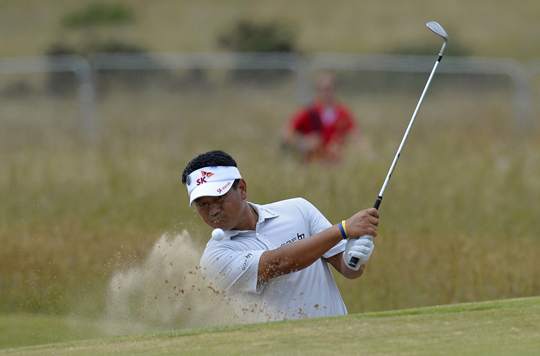 Korea’s trailblazer KJ Choi has enjoyed a love affair with Augusta National since making his debut in the fabled tournament in 2003. ― Reuters pic

“If other players practiced for two hours, I did three hours. I always tried to practice more than the others and I was obsessed to overcome what people thought of me. And those hours of hard work and with God’s help, I could play on the PGA TOUR for 21 years. As I look back at my career now, there are really some records to commemorate and I’m proud to be one of Korean players to play on TOUR.”

As he prepares to transition to PGA TOUR Champions which is limited to players above 50 years of age, Choi continues to root for aspiring Asians to emulate, if not, surpass his achievements. He is somewhat envious the modern-day golfer now has the advantage of utilising science and technology to help them become stronger and faster as compared to his early days where he honed his swing and game through the old-fashioned method by reading golf legend Jack Nicklaus’ book, My Way. Through his journey, Choi won tournaments on the Korean Tour, Asian Tour, Japan Golf Tour and European Tour before reaching the summit.

Interestingly, Choi’s calling to golf was also by sheer luck. He recalled a time during high school when he was drafted into the golf team, even though he was already established as a weightlifter. “It was fate that I became a golfer,” he said. “At that time, a golf team was being formed, and there was a recruitment drive. They picked members from the weightlifting team, including myself, and there were a total of 10 applicants, with the head coach lining us up, and then we were told to stand on the right side for the weightlifting team and on the left for the golf team. I was on the left side, so I became a golf team member. I still wonder why the coach told me to go to the left side.”

South African star Ernie Els, who has competed alongside Choi through the decades, is one of many contemporaries who holds the Korean legend in high esteem. “K.J. is one of those great stories you get in golf,” said Els. “He starts hitting golf balls in fields and finds himself on the PGA TOUR and being the guiding light for Korean golf. It's quite amazing. I believe he really opened the gates for Korean male golfers.”

Sungjae Im, the 2019 PGA TOUR Rookie of the Year, is amongst the growing legion of Korean stars on the PGA TOUR who were inspired by Choi. He said: “Since young, I watched KJ winning on TOUR and always thought that one day I want to experience what KJ has done. Playing on the PGA TOUR was my goal since then. If we practice round together, he comments about course management and gives advice. He also gives advice on general things.”

Byeong Hun An, who moved to the US when he was 15 to pursue his golf career, added that Choi was always ready to play practice rounds with the new generation of golfers and impart his knowledge along the way. “He never refused,” said An, who will be making his fourth Masters appearance.

“He always gives us advice … he’s got all the experience in the last 20 years and that’s something you should never ignore from a guy like him. I think it would have been harder for us to come out to the PGA TOUR if it wasn’t for him,” An said. “He opened a lot of doors for Asian golf, not just Korean golf. He had a very strong mentality and worked very hard and that definitely helped us get onto the PGA TOUR and opened our eyes a little bit more. All the wins he had gave us hope that we can do it too.”

* Chuah Choo Chiang is Senior Director, International Marketing & Communications, APAC for the PGA TOUR and is based in Kuala Lumpur, Malaysia. You can follow the PGA TOUR in Malaysia on Astro Golf Channel and GOLFTV powered by PGA TOUR.