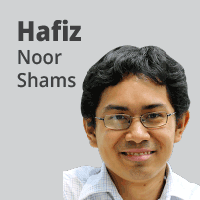 MARCH 22 — I am not particularly warm to the Kajang move but it had its significance. I write in the past tense because Anwar Ibrahim is not in the equation anymore after the court overturned his 2012 acquittal.

I disagree with the court’s decision but that is arguably a matter of opinion. What is a fact is that the many commentaries dedicated to Kajang in the past weeks were rendered irrelevant by it.

The so-called Kajang move itself has been turned into pretty much nothing but a chance at practising soaring rhetoric.

The political maneuvering was dubbed by pro-Kajang members of Pakatan Rakyat as the road to Putrajaya. It is now a road to nowhere.

Kajang now solves none of the problem the Anwar Ibrahim candidacy was supposed to solve. The balance of power remains substantively unchanged, except maybe the Selangor water deal, which pro-Kajang PKR members have received quite uncomfortably. As an outsider, it appears to me that it is all practically status quo all over again.

Wan Azizah, the president of PKR and the wife of Anwar Ibrahim, is now the candidate for Kajang, versus MCA’s candidate Chew Mei Fun. For Chew, it is an exercise in futility. Chew, like her party, is a spent force, sent out to be slaughtered, except perhaps to assess how unpopular MCA is.

Maybe there will be some good to someone after all. Maybe Umno can look back at Kajang some time in the future and then demand more seats for themselves at the expense of MCA. Poor MCA but they deserve it through and through.

Wan Azizah, PKR and Pakatan Rakyat as a whole will likely win. It is hard to imagine how they would lose the by-election. PKR won the state seat with a huge majority in 2012. I think the only credible third option was Zaid Ibrahim. Not that I think he would win but he is more tolerable than almost anybody from MCA.

I have a hard time imagining Pakatan Rakyat supporters — not necessarily members — who angered by the Kajang move would vote for Barisan Nasional. Just because they — and me are angry at Anwar Ibrahim and possibly Rafizi Ramli as the identified mastermind of the whole maneuvering, does not make Barisan Nasional more attractive as a choice.

I am angry at PKR specifically, but I have not forgotten the excesses, the corruption and the arrogance of Barisan Nasional. Should I add stupidity as well?

People like me are trapped between Pakatan Rakyat… and Pakatan Rakyat. So I do feel a serious sense of disenfranchisement. The world is not about me, I know, but that does not mean I like being used and taken for granted.

At a dinner not too long ago, a Pakatan Rakyat Member of Parliament asked me how I would vote if I was a voter in Kajang. I said I would not go out and vote. I could say that without much regret because it was a hypothetical situation. I do not get to vote in Kajang.

With the appellate court’s curiously rushed decision, Pakatan Rakyat will turn the Kajang move into a referendum against the Barisan Nasional. Wan Azizah being the wife will also mean the sympathy card is in play.

When the court decision was made that Friday, it was impossible to claim the tears she shed were for dramatic purpose. What Anwar Ibrahim is facing is nothing short of injustice. When I learned the judgment, something inside me boiled into anger.

Let us not think those who sneer at the Kajang move would like injustice done to the former deputy prime minister. An injustice remains an injustice but it does not make one wrong any better. If two wrongs make a right, then I would question our moral standards.

So, it will be a successful referendum.

But then again, every by-election is a referendum. One too many — let us not forget that other by-election in Sarawak — and it trivialises the very word, degrading the democratic practice to the level of Akademi Fantasi/American Idol. We go to great lengths to vote for nothing substantive.

That indeed is how I see the whole episode. Look it up in an English dictionary. Under the F section, there is an entry for the word “farce.”