Ex-1MDB company secretary never met Najib or witnessed him signing off on decisions, says didn’t think former PM would entertain her as ‘level too high’

Former 1MDB company secretary Goh Gaik Kim is pictured at the Kuala Lumpur High Court Complex May 12, 2022. ― Picture by Devan Manuel
Follow us on Instagram, subscribe to our Telegram channel and browser alerts for the latest news you need to know.
By IDA LIM

KUALA LUMPUR, May 12 — A former company secretary of 1Malaysia Development Berhad (1MDB) today confirmed that she had never met former prime minister Datuk Seri Najib Razak to obtain his signature for decisions on the Finance Ministry-owned company, believing that he would not have entertained her anyway.

The former 1MDB company secretary, Goh Gaik Kim, instead said she was told to leave it to then 1MDB CEO Datuk Shahrol Azral Ibrahim Halmi to obtain Najib’s signature for the written approvals.

Goh said this while testifying as the 17th prosecution witness in Najib’s trial over the misappropriation of more than RM2 billion of 1MDB funds, explaining to the court that she did not believe Najib would have wanted to see her over the 1MDB resolutions.

During the time when Goh was 1MDB’s company secretary from March 31, 2011 to April 1, 2016, Najib as the finance minister was the representative of 1MDB’s shareholder Minister of Finance (Incorporated) (MOF) Inc. This is due to MOF Inc being owned by the Finance Ministry.

Decisions made by 1MDB such as for major financial deals or transactions had to be approved by the board of directors and its shareholder, with multiple documents shown in court previously where Najib signed on behalf of 1MDB’s shareholder on resolutions granting approvals for 1MDB decisions.

Asked today by Najib’s lawyer Wan Aizuddin Wan Mohammed if she ever had to secure the shareholder’s signature on resolutions for 1MDB decisions, Goh said she had asked a 1MDB senior management official Zahid Taib about this when she first joined the company but was told she was not required to do so.

“So I asked him, do you have a file with previous letters to MOF, how do I get these resolutions signed. He said just pass to Datuk Shahrol and he will arrange for signature,” she said.

Wan Aizuddin: I understand the process is different, but your role as company secretary in Sime Darby, it was your responsibility to do the legwork to obtain approval. But here in 1MDB, did it strike you as odd or unusual, you don’t have to be involved at all to deal with MOF?

Goh: No, I didn’t see it as odd because the level is too high. So it’s not surprising for Datuk Shahrol to see the prime minister to get signature, because you know, I don’t think he will even entertain me. The instruction was to give Datuk Shahrol, maybe Datuk Shahrol would want to explain it to him. 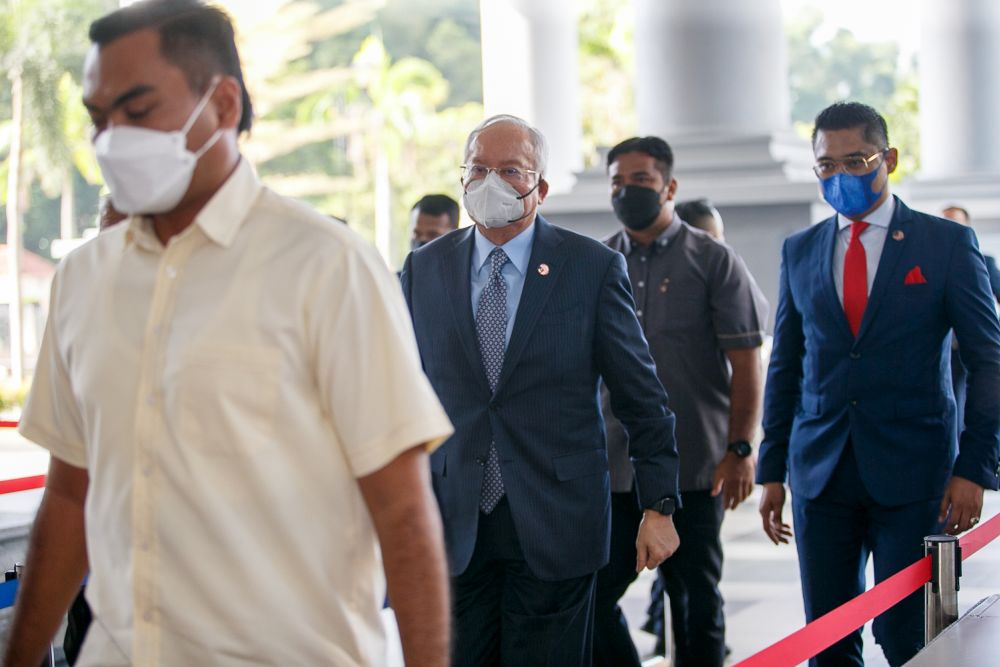 But Goh confirmed that she was never told by 1MDB individuals such as Shahrol or Zahid to go through the Bahagian MKD if she needed the shareholder’s signature on the 1MDB shareholder’s resolutions.

Goh also confirmed to Wan Aizuddin that she had never met Najib throughout her years of service as company secretary of 1MDB, and that she had seen him for the first time yesterday when she started testifying in this trial.

Wan Aizuddin: Yesterday was the first time you saw him in person?

Confirming that she had never personally seen Najib put down his signature on any of the 1MDB documents such as the shareholder’s resolutions, Goh agreed that her verification of and familiarity with Najib’s signature was based on the previous 1MDB documents.

Later when asked by deputy public prosecutor Mohamad Mustaffa P Kunyalam on whether she knew who Shahrol instructed or from whom Shahrol received the shareholder’s resolutions from Najib, Goh replied: “I don’t know.”

Yesterday, Goh had told the High Court that she would prepare the directors’ circular resolutions (DCR) that was regarding standard matters for 1MDB directors to sign to give their approval, and that she would then prepare the related 1MDB shareholder’s resolution to be given to Shahrol to be signed by Najib.

But for DCRs that were regarding non-standard matters such as finances, investments and joint venture by 1MBD, these DCRs would be prepared by 1MDB senior management such as its general counsel Jasmine Loo.

And for such DCRs not prepared by Goh, the shareholder’s resolution would be delivered to her by either Shahrol or senior management personnel such as Loo, with such resolutions already signed by Najib when delivered to Goh.

Salleh for cross-examination, as well as former chief secretary to the government Tan Sri Mohd Sidek Hassan to testify.