Long associated with Ramadan, how did dates become popular in Malaysia? (VIDEO)

People buying dates during Ramadan at Bazaar Kurma Malik Mohd, Shah Alam. ― Picture by Miera Zulyana
Follow us on Instagram, subscribe to our Telegram channel and browser alerts for the latest news you need to know.
By ASHMAN ADAM AND SHAHRIN AIZAT NOORSHAHRIZAM

KUALA LUMPUR, April 22 ― Dates have come to be synonymous with the Muslim holy month of Ramadan but there was a time when these sweet dried fruits were not a fast-breaking staple in Malaysia.

Luqman Hakim Mansoor, who was selling dates at the Bukit Rahman Putra Ramadan Bazaar, said that in his 22 years of life, he has always remembered his family breaking fast by eating dates.

After all, eating dates during Ramadan is considered to be sunnah ― or the way of the Prophet Muhammad (pbuh) ― as he is credited with saying “break your fast by eating dates, if not, do it by water as it is purifying.”

“We started this as a side gig, wanting to make some extra money for Hari Raya. Everyone else here is selling lauk or kuih, but everyone looks for kurma,” he said, using the Malay word for dates.

According to academic Mohd Faizal Musa ― more popularly known by his pen name Faisal Tehrani ― dates have always been popular among Malaysian Muslims, as evidenced in several old Malay texts.

“In fact, there’s a kampung called Parit Kurma in Muar which dates back to 1924,” he said. The village is also called Parit Keroma.

However, he said the widespread popularity of dates can be traced back to the 1990s when the large diaspora of Egyptians and Iranians living in Kuala Lumpur started bringing in large quantities of dates from their homelands.

“Iranian and Arab grocery stores also helped grow the popularity of dates. Iranian dates from Bam (a city in the Kerman Province of Iran) were a huge success here, together with the Egyptian Mariami,” he said, referring to Mariami dates, which are considered the most delicious of dates.

This coincides with data from the International Trade Centre, a body under both the World Trade Organisation and the United Nations, which shows a slow rise in the import of dates into Malaysia from the year 2003. 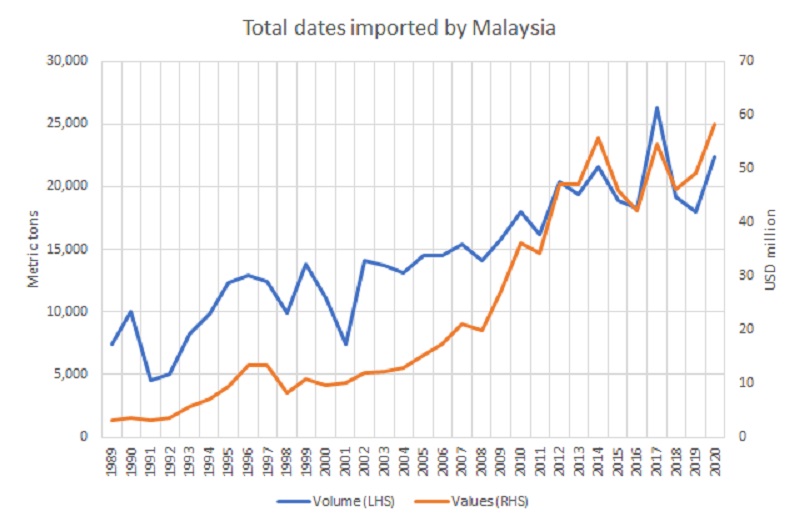 Hafiz proposed that the period between 2000 and 2010 coincided with the rise of Tunisia as an exporter of dates to Malaysia, outstripping China, Iran and Egypt which were the biggest suppliers prior to that period. ― Picture by Hafiz Noor Shams

In a blog post earlier this month, economist and former special officer to a finance minister Hafiz Noor Shams cited the aforementioned data showing that date imports in Malaysia were approximately 440 g/person in 1989 and rose merely to 480 g/person in 2000. However, it surged to 640 g/person in 2010 and more to 700 g/person in 2020.

Hafiz proposed that the period between 2000 and 2010 coincided with the rise of Tunisia as an exporter of dates to Malaysia, outstripping China, Iran and Egypt which were the biggest suppliers prior to that period. Malik Mohd, owner and proprietor of Bazaar Kurma Malik Mohd in Shah Alam, sharing with Malay Mail that he has been selling dates for over 30 years, seeing it as a business as well as a way to help fellow Muslims perform ‘sunnah’. ― Picture by Miera Zulyana

Malik Mohd, owner and proprietor of Bazaar Kurma Malik Mohd in Shah Alam, told Malay Mail he has been selling dates for over 30 years, seeing it as a business as well as a way to help fellow Muslims perform sunnah.

Sunnah refers to the traditions and practices of Prophet Muhammad, which include consuming dates. As an exemplar, Muslims strive to follow the prophet’s actions.

After inheriting his father’s convenience store in 1982, Malik said he made the decision to import dates from various Middle Eastern countries including Iran, Iraq and Egypt.

But it was not always smooth sailing. “Back in 1992, we struggled to sell even one container’s worth of dates.

“But at the turn of the century, the demand for dates started to boom and my business grew with it.  By the mid-2000s, I could sell three to four containers of dates during Ramadan alone,” he explained.

He said that over the last 10 years, the demand for dates has become so high that business during non-Ramadan times is still very good. Malik added that even non-Muslims have now been buying his products in bulk. The popularity of dates grew with the internet and access to more Islamic knowledge, according to Adira Adipso, a trader of sunnah food ― a term used for foods believed to be consumed by Prophet Muhammad during his life such as dates, honey, figs and olives.

Adira ― whose parents are the owners of Rimbun Serai which creates beautiful sunnah food hampers and gift sets sold at the Shah Alam Convention Centre ― said that before the 90s, Islamic influence was not as strong as it is now, and breaking one's fast with eating dates was never a mainstream practice.

“People’s knowledge about sunnah food is now so much better since the 2000s, when information became more easily accessible and as a result of that, the practice of eating dates to break fast is now so widely practised among Malaysians.

“Now, you will encounter businesses like my family’s more easily compared to the 90s and even early 2000s. The demand for dates, not just for consumption but also as gifts… it’s there,” Adira told Malay Mail. 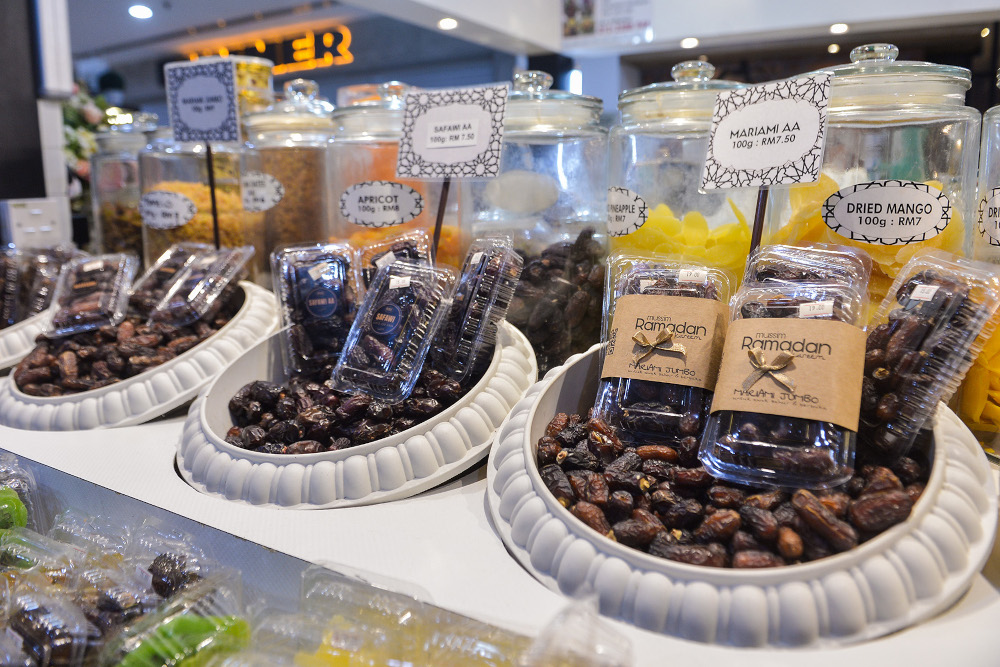 Samples of the ‘sunnah’ food hampers and gifts prepared by Adira Adipso at Rimbun Serai at SACC, Shah Alam. ― Picture by Miera Zulyana

The whisper that gets you searching for dates

Meanwhile, the Malaysian king of dates, the man whose name is “whispered” every fasting month on radio and television all across the country, Datuk Seri Yusuf Taiyoob said that dates are not new to Malaysia.

Yusuf has been in the dates business for 30 years, with his brands previously dominating the market with various varieties of dates, opening customers’ eyes to the different tastes of dates as Ramadan arrives.

He told Malay Mail that since the demand for dates has skyrocketed over the years, so has the quality of dates that get imported into the country.

The George Town-based entrepreneur said that before the boom in the late 90s, the dates that were available in Malaysia were not of good quality and they were not marketed so widely.

“Back in the day, people just scooped their dates out of an old dusty sack and the quality of dates that we got was not very good.

“But for the past 20 years, Malaysians' view of dates has changed. People look at the advertising, the packaging and are attracted to it. Even the taste of dates has become better and better which is drawing in more demand,” he told Malay Mail in an interview over Zoom. 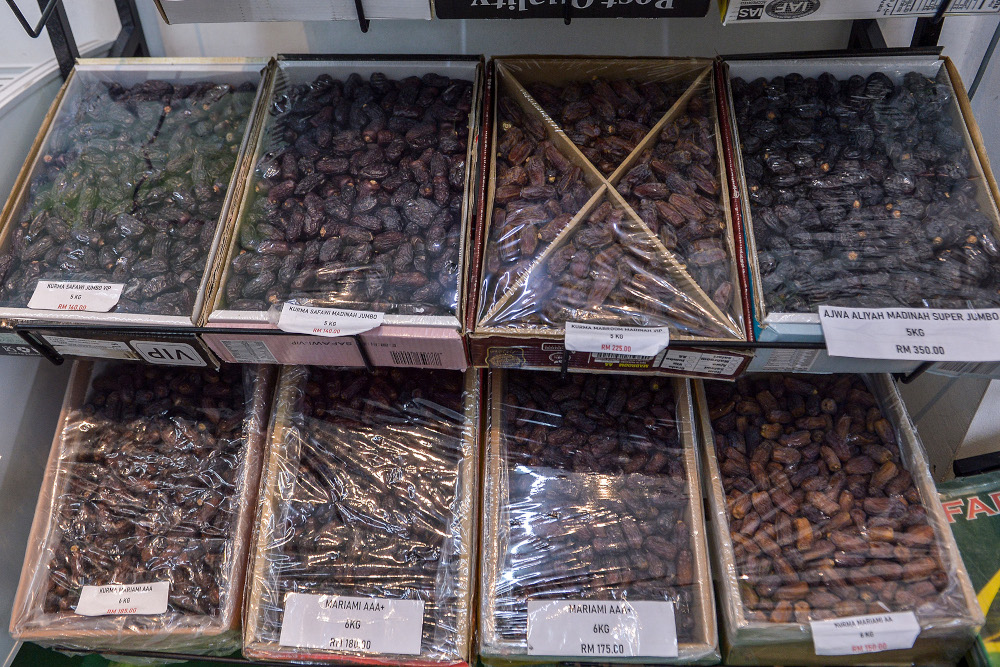 A selection of dates from all across the Middle East being sold at Bazaar Kurma Malik Mohd, Shah Alam. — Picture by Miera Zulyana

His company Yusuf Taiyoob Sdn Bhd now sells 25 varieties of dates from the sought-after Safia, Wasem and Ajmal, to Nefisa, Deena and Jebel.

When asked if the popularity of dates can be credited to the famous “Yusuf Taiyoob '' whisper ― commonly heard before the announcement of iftar, or breaking fast, he gave the credit instead to the quality, taste and nutritional values of the dates themselves.

Nevertheless, in Malaysia when you hear “Yusuf Taiyoob” you immediately think of dates.