Election Commission officers make final preparations for the voting process in conjunction with the Johor state election at Sekolah Kebangsaan Tanjung Puteri, Johor Baru, March 11, 2022. — Picture by Hari Anggara
Follow us on Instagram, subscribe to our Telegram channel and browser alerts for the latest news you need to know.
By RADZI RAZAK

JOHOR BARU, March 12 — A total of 2.5 million Johoreans have the power to determine who takes the reins of the state government today, as polling day dawns on an election campaign that started long before nomination day on February 26.

Crucially, the state polls will go down in the history books as the first time that voters aged 18 to 21 get to participate in the election process in Malaysia.

It will also be seen as a way for the country's ruling coalition — Barisan Nasional (BN) — to gauge public support as it gears up for a highly anticipated general election. BN — whose campaign motto is ‘Stability for the Future’ — is seen as the favourites largely due to caretaker Mentri Besar Datuk Seri Hasni Mohammad’s likeability and good reputation among Johoreans.

Indeed, Najib proved himself so popular, that any appearance was packed to the rafters, which earned him five out of 42 compound notices issued by the Ministry of Health on Thursday for breaches of standard operating procedures (SOPs) in relation to campaigning for the state polls.

“If you support Bossku, support BN,” he was quoted as saying during events, which were mostly meet-and-greets organised by grassroots party members or “friendly” organisations.

All pointed out that the Pekan MP is currently convicted of multiple graft charges pending appeal and is responsible for destabilising the country and tarnishing its reputation over his role in the 1Malaysia Development Berhad (1MDB) scandal.

The Opposition, however, was far from united in its cause, as seen by the numerous banners criticising not only BN, but also taking potshots at each other — a move that many voters said would only work against them.

“We have so many Opposition parties now. Who will be the one to stand up against BN and rally the people?” voter Raymond Liew told Malay Mail during a ceramah.

Analysts concurred, with political and policy think tank Ilham Centre predicting yesterday that BN will secure a supermajority of 35 seats in the 56-seat Johor legislative assembly.

PH, meanwhile, could win 10, with a close race expected for the remaining 11 seats, among BN, PH and PN.

DAP secretary-general Lim Guan Eng said the Opposition remains optimistic and believes that as long as people head to the polling station, they will win the popular vote.

He told crowds that an analyst who “spends thousands of ringgit” had predicted PH could win anything from zero to 21 seats if the voter turnout ranges from 60 to 65 per cent.

“But if voter turnout is 70, 75 per cent, then we stand a good chance of winning. So we must ask everyone to return home and come out to vote,” he said during several ceramah this week. 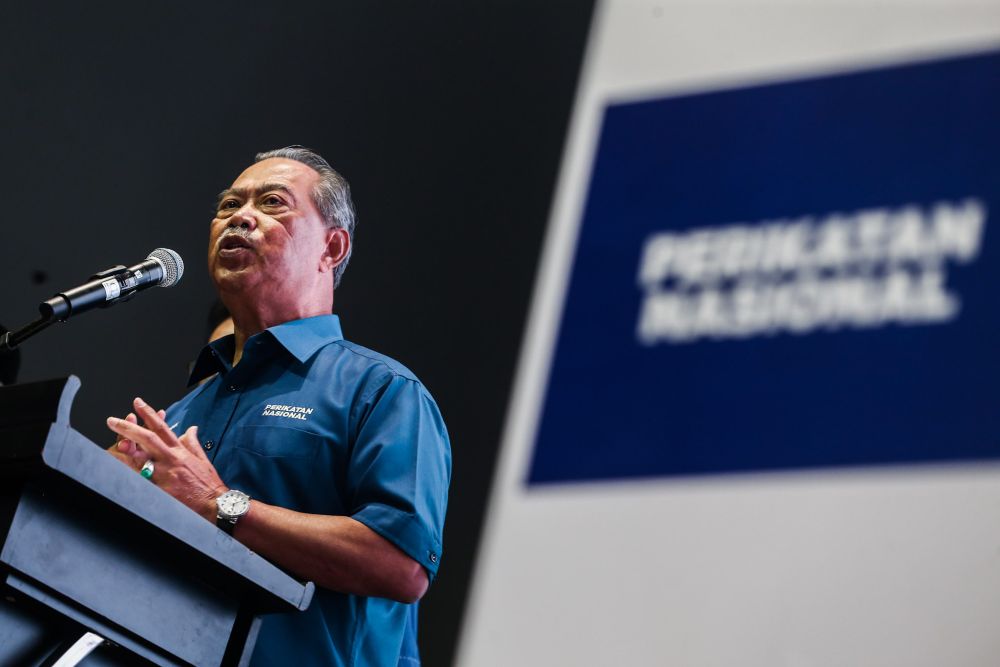 Tan Sri Muhyiddin Yassin delivers a speech at the launch of Perikatan Nasional’s manifesto ahead of the Johor state election in Johor Bahru March 2, 2022. — Picture by Hari Anggara

“The campaign momentum is good. We are focusing on all areas, especially in constituencies which we think require more effort, the grey areas. Here, we will step up our ceramah and meet voters face-to-face,” he told the media when visiting Kluang.

Muhyiddin, along with ministers Datuk Seri Azmin Ali and Datuk Seri Mustapa Mohamed, constantly spoke about Felda issues on the campaign trail and claimed their administration was responsible for helping the settlers.

But no matter what happens today, the results will decide what the future holds for Malaysia and its various political coalitions.

All eyes will be on the Opposition and whether its parties will be wiped out as they were in Sabah, Melaka and Sarawak before this. BN chairman Datuk Seri Ahmad Zahid Hamidi openly said yesterday that the coalition wanted to push for the 15th general election after July as the “feel-good factor” was very much in its favour.

More importantly, today’s polls will also determine the impact that Undi18 could have on the next general election, and whether the rejigged composition of the electorate is matched by any significant change in the patterns and themes that have long governed Malaysian politics.