KUALA LUMPUR, Sept 4 ― The Orang Asli community in Malaysia have taken to creating TikTok videos to spread awareness of Covid-19 precautionary measures and vaccination among the country’s indigenous community.

This is their latest effort since March 2020 to help protect the community, by creating educational materials on the Covid-19 pandemic in their own languages.

Under the #OALAWANCovid campaign hosted on the Facebook page named OA Lindungi Komuniti, a contest to produce one-minute TikTok video clips on Covid-19 standard operating procedures (SOP) and the importance of vaccination was launched.

These short video clips ― which had to be original video produced by the Orang Asli just for the contest ― were posted on the Facebook page, with the content to be judged on various criteria such as their originality, creativity and popularity.

In just 17 days during the contest period from August 15 to August 31, a total of 30 participants from the Orang Asli community submitted their video clips, which were collectively viewed an impressive 26,700 thousand times, the contest organisers told Malay Mail.

In fact, the video clip with the most views had 4,200 views, while nine of the 30 videos had more than 1,000 views each, the organisers said.

Out of the 30 videos, 18 were made using Bahasa Malaysia, while the rest were in the Orang Asli community’s own languages for their own sub-ethnic groups ― four using Bahasa Semai, three using Bahasa Temuan, three in Bahasa Mah Meri, and Bahasa Semelai.

Participants were from various age groups with a high display of youth creativity, but with even children and older participants making the effort to share Covid-19 information.

From the Facebook page, the videos seen spanned different genres, including a stop-motion animation clip, and a woman from a Negri Sembilan Orang Asli village used bamboo as a traditional music instrument as she sang a song she created with her own lyrics.

There were also light-hearted videos, such as a comedy sketch where two of the “actors” refused to follow Covid-19 SOPs such as wearing face masks and wanting to shake hands, and were seen “travelling to London” (with the use of a virtual background) without SOP compliance and subsequently testing positive for Covid-19.

The contest results will be announced on September 5 on the OA Lindungi Komuniti Facebook page, with cash prizes for winners including the video that gets the most Facebook “likes” from August 15 to September 4.

Rusaslina Idrus, a senior lecturer in Universiti Malaya’s Faculty of Arts and Social Sciences who is also a trained social anthropologist, told Malay Mail that the TikTok contest is actually a continuation of volunteer work from the Orang Asli community since last year.

Back in March 2020 when Malaysia imposed its first-ever movement control order (MCO) where lockdown-like restrictions were made to stop Covid-19 from spreading, Rusaslina said there were requests from friends on the ground who said the Orang Asli community had not received the necessary information.

Rusaslina said the available Covid-19 information ― with new information also coming in daily ― at that time was more geared towards the urban community, and that some of the Orang Asli did not know what MCO was about or knew about MCO but were concerned about what they could or could not do during the lockdown.

“Because a lot of the messaging is a bit targeted to urban areas… you know, the concept of ‘duduk rumah’ (stay home) or buying things online using e-wallet, even using MySejahtera, some of these things are not available to the Orang Asli community,” she told Malay Mail when contacted earlier this week, also noting that online food delivery services for example may not be available to some in the indigenous communities who as subsistence farmers have to get food from their farms or gardens.

Rusaslina said this led to the idea of creating digital posters on MCO and Covid-19 with information and messaging that would be relevant culturally to the Orang Asli community.

Acting as a coordinator for the Orang Asli community’s volunteers and her university, Rusaslina said the work initially was informally done as individuals came together to contribute, with Rusaslina drafting the initial text in Bahasa Malaysia for the poster and with the design done by Ezrena Marwan. 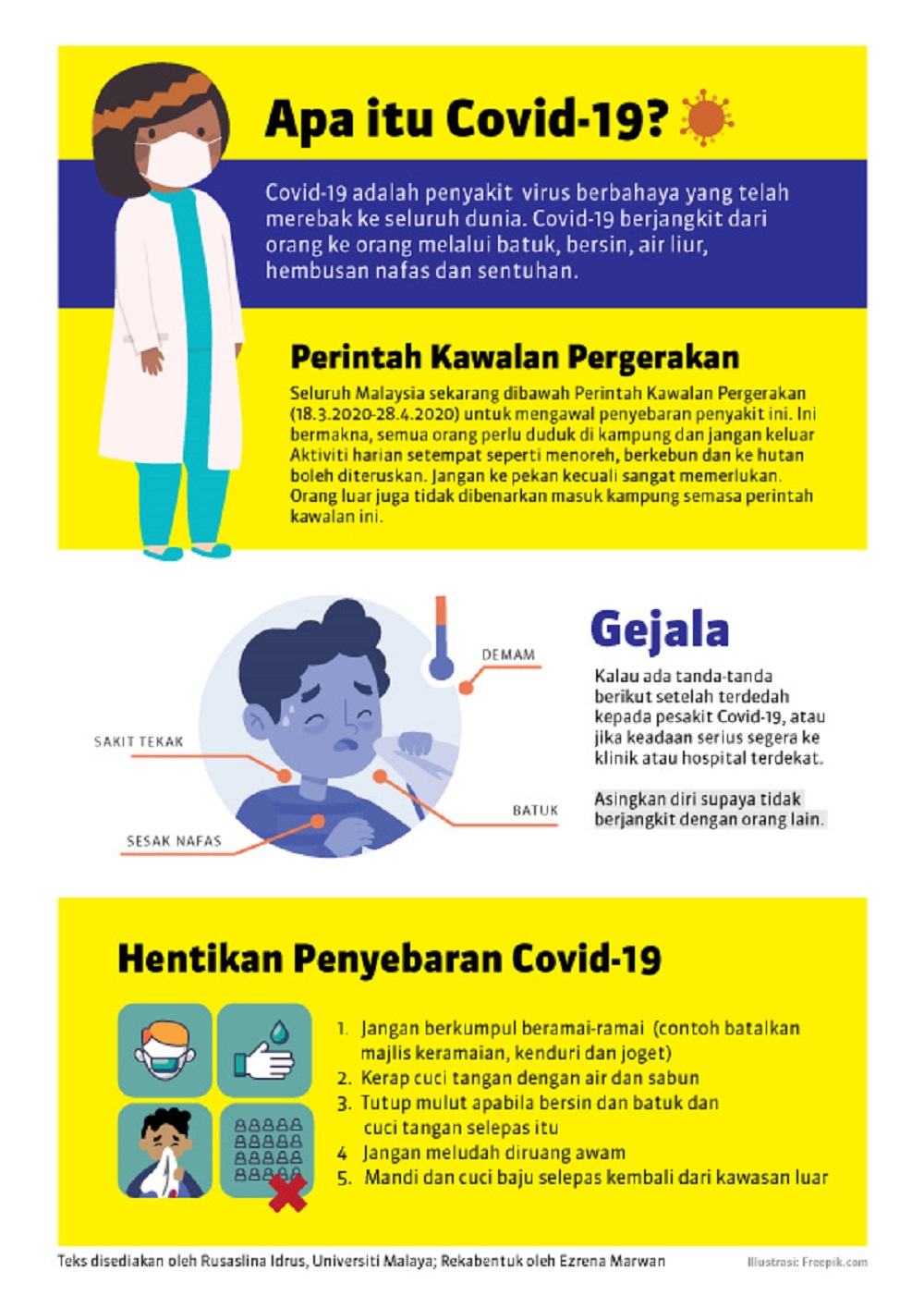 Within just a few days from when the first MCO started, the first version of the poster was already out on March 20, 2020 and the revised version was out on April 18, 2020.

The poster reflected situations relevant to the Orang Asli community, such as stating that they were to stay in their villages and not to go into towns unless necessary and that outsiders were not allowed into the villages during the MCO period, while saying the villagers could however still go their “kebun” or farms.

This very first poster in Bahasa Malaysia ended up being translated into 15 different languages including sub-dialects as the same sub-ethnic group in different states may have different terms, with these 15 being Jahut, Jakun (Johor and Pahang), Mah Meri, Semai (Pahang and Perak), Semelai, Semaq Beri, Temiar, Temuan (Selangor and Negri Sembilan), and Sabah’s Orang Asal community’s Dusun, Rungus, Badjau, and Suluk. 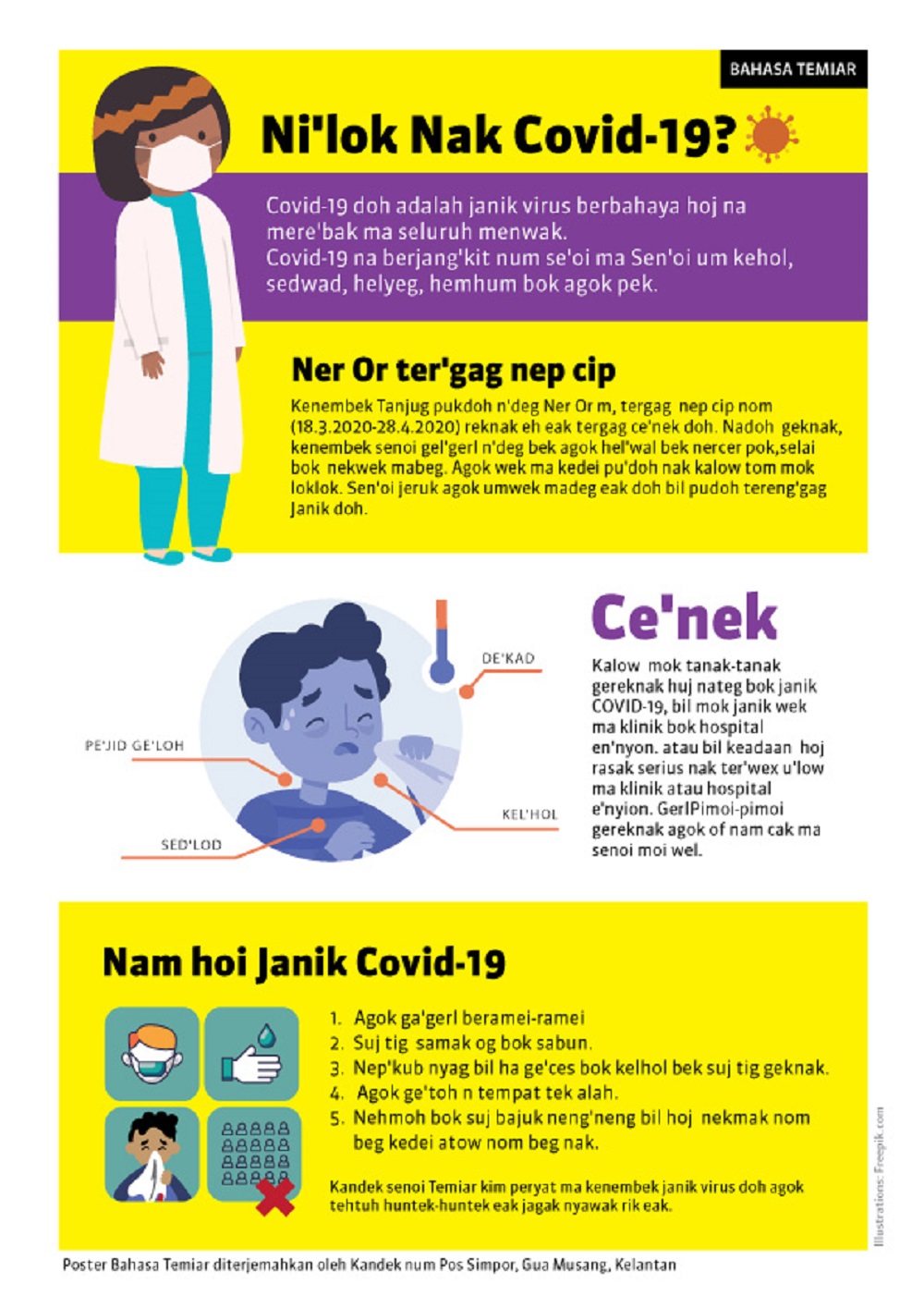 Using everything it takes

Rusaslina said Ita, one of the volunteers who is from the Semai tribe, was the first person to create recorded audio messages on WhatsApp based on the Covid-19 poster, before circulating the poster together with the audio message. Other volunteers including teachers formerly from teachers’ training institute IPG Kampus Tengku Ampuan Afzan did the same.

The idea of having audio messages was to expand the reach of the poster that was being shared by WhatsApp, as not everyone in the community can read. Such audio messages were created in eight languages and sub-dialects (Semai, Temuan, Jakun, Dusun, Rungus, Badjau, and Suluk).

Rusaslina said she also heard that health authorities and groups or agencies working with the Orang Asli community had printed out the posters, noting that the poster was made available in high-resolution from the very start to such agencies such as district health offices and the Orang Asli Development Department (Jakoa) that would enable printing as the poster was for free and open use. The printing was another way to expand reach, as not everyone may have a smartphone.

This year, the same group of volunteers made yet another digital poster, this time focusing on promoting Covid-19 vaccination with the text prepared by Rusaslina, Universiti Kebangsaan Malaysia’s Anthropology and Sociology Programme’s lecturer Zanisah Man and Ita.

With posters being a low cost and quick way of getting information out, the volunteers were however aware of its limitations and wanted to ensure information on Covid-19 would also be shared in other forms such as videos, Rusaslina said.

Rusaslina said she saw that some of her Orang Asli friends really liked TikTok and that there were also YouTubers from the Orang Asli community, noting that people generally do like watching videos.

As the volunteers’ expertise was not in making videos, this then led to the TikTok contest in August 2021 where the Orang Asli community themselves could be involved in making the videos, with the hashtags #OAlawanCOVID and #OAlindungikomuniti created at this time. These two hashtags mean Orang Asli fight Covid-19 and Orang Asli protect the community.

(Rusaslina said the #OAlawanCOVID is the preferred hashtag and name for the campaign as it is catchy, but said this was somehow not allowed by Facebook for use as the Facebook page’s title and that the Facebook page now uses the OA Lindungi Komuniti title.)

The TikTok contest was co-organised by a UM team which also gave credit to the community volunteer translators, the Hospital Orang Asli Gombak which provided medical input and by the JKOASM who helped spread the word among its network of Orang Asli villages.

For the UM team which acted as a secretariat for the TikTok contest, Rusaslina said this included UM law student Shereen Ajani who is from the Temuan tribe, and who played an important role by contributing her ideas regarding social media.

Apart from Rusaslina and Shereen, Rusaslina's student assistant Aishah Annuar is also part of the three-person secretariat, with her role being the managing of the OA Lindungi Komuniti Facebook page and uploading the TikTok videos to the page, and communicating with the TikTok video contest's participants.

“This idea of Lindungi Komuniti or the Orang Asli are in it also to Lawan Covid, I think this is a very important messaging, and this messaging is even more meaningful and impactful coming from the community themselves,” Rusaslina said of the two hashtags used for the TikTok contest and the wider education efforts.

Even before the TikTok contest, Rusaslina said there was already ongoing conversations online within the Orang Asli community on Covid-19 matters, such as videos in recent times or social media posts where Orang Asli leaders made personal appeals to encourage the community to undergo vaccination, and even photos posted by those who had been through the experience sharing that it was safe and not painful to take the vaccine.

Rusaslina said news reports in the early stages appeared to portray the Orang Asli community as having an irrational reaction in rejecting Covid-19 vaccination, but said that such vaccine hesitancy was actually quite normal and based on rational concerns as they did not have enough information then.

Rusaslina said there was now a high rate of Covid-19 vaccination among the Orang Asli community but with some lingering vaccine hesitancy for those without the relevant information.

She said that the approach should not be top-down with Covid-19 vaccination seen as being imposed on the Orang Asli community, noting that the community should instead be seen as “partners” that are part of the solution and not part of the problem in public health initiatives.

Rusaslina said that a new and larger coalition of academics, non-governmental organisations and individuals who had been working on Orang Asli issues in various ways had last week started coming together, with the intention of producing more Covid-19 crisis communication materials amid higher number of Covid-19 cases in the Orang Asli community.

As the #OAlawanCovid hashtag is catchy and already known to the public and there is already some following on the Facebook page, this new coalition has adopted the tagline and will also be using it to refer to the coalition, she explained.

The new coalition plans to brainstorm on and put out more materials for the Orang Asli community, with the latest being a third set of posters on severe Covid-19 symptoms, quarantine information and enhanced movement control orders (EMCO) that has already been put out in Bahasa Malaysia on the Facebook page and is in the process of being translated to Orang Asli languages.