Phase One: Businesses in Klang say they are surviving on the patronage of regulars and the neighbourhood community

Customers queue outside Restaurant Ghuhan for their takeaway banana leaf meal during the movement control order 3.0 (MCO 3.0) in Klang June 23, 2021. — Pictures by Miera Zulyana
Follow us on Instagram, subscribe to our Telegram channel and browser alerts for the latest news you need to know.
By DANIAL DZULKIFLY

KLANG, June 28 — A line of people are in front of Yap Kee, a kopitiam in downtown Klang, waiting patiently for their turn to choose which dishes — golden fried chicken or fish, vegetables, type of curry gravy — they want for their takeaway lunch.

Such a sight, which used to be an everyday affair, has become rare now as businesses here and in other parts of the country struggle to deal with the economic impact of Covid-19.

Shops here are mostly closed except for businesses that are allowed to operate during Phase 1 of the National Recovery Plan.

Many of the owners of local eateries Malay Mail visited said things are definitely much more difficult this time round, not just for them but for their customers as well.

Iswaran Yamakaya, 51, who owns and operates Ghuhan — a banana leaf business inside Yap Kee — said that while he has adapted to the current standard operating procedures (SOPs), the fact that there are fewer customers points to the diminished purchasing power of ordinary Malaysians.

“Of course people prefer to eat in and enjoy a proper dining experience but we all have to adapt.

“My sales have gone down by nearly 70 per cent this time around but it’s not really about the SOPs but rather that people now just have less cash on hand, perhaps due to unemployment or being cautious with their spending.

“Times are tough and everyone is suffering now... it is what it is,’’ he said.

Iswaran explained that while he has subscribed to online deliveries, it is his regulars who are keeping his business afloat.

“While online orders can be helpful, it is thanks to the local community here that I am operating well enough to cover some of the cost,’’ he added. 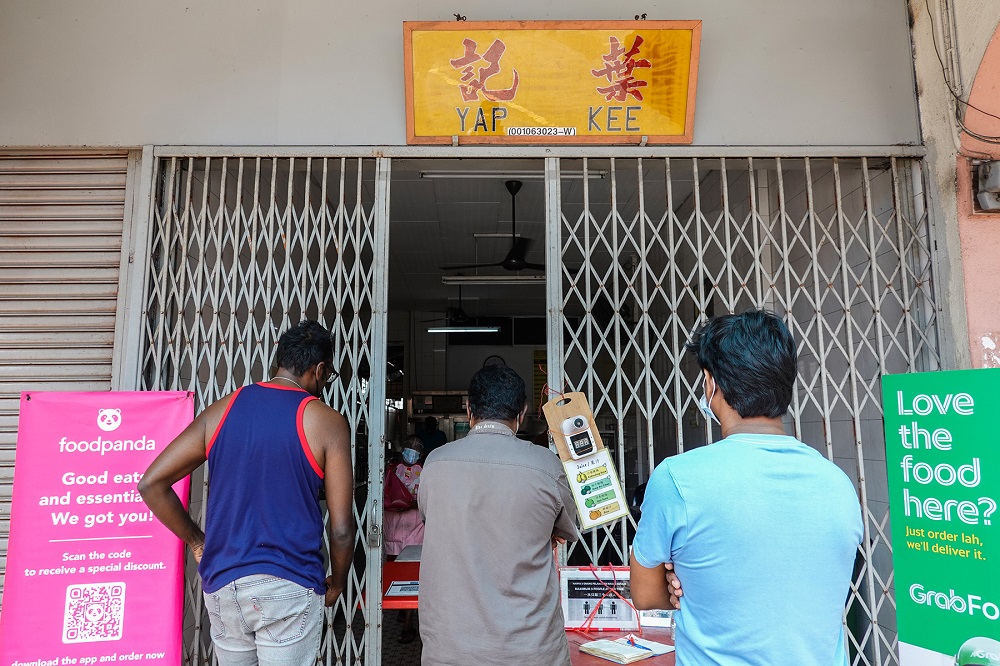 Customers wait at the entrance of Yap Kee kopitiam in Klang June 23, 2021.

Iswaran is the third-generation operator of Ghuhan (previously known as Raman Nair restaurant) which has been operating at Yap Kee since 1923.

Yap Kee provides the drinks while Ghuhan serves banana leaf meals; this has led to people referring to the place as Yap Kee banana leaf restaurant and both have been serving the community no-frills banana leaf meals and drinks at affordable prices for nearly 100 years now.

Many of downtown Klang’s historical buildings were built before the country’s independence.

While some premises have gone through a facelift or complete overhaul, some proprietors prefer to keep the charms of old Malaya intact. One such place is Chong Kok Kopitiam, a local café that has been in operation for 82 years.

Known for its kaya toast, nasi lemak, half boiled eggs and its own blend of coffee, among other menu items, Chong Kok is the go-to breakfast or brunch spot for locals.

Foo Mee May, one of the owners of Chong Kok, said how her customers spend during the current lockdown is very different.

“People were still spending then, wanting to support their local cafés or businesses. Now it’s a very different story.

“Of course, businesses are going through a tough time now but ordinary people too are struggling to keep themselves afloat. People just don’t have that much money on hand as well,’’ said the 65-year-old.

Foo said the current operating hours of 8am to 8pm do not work well for them as the 82-year-old kopitiam specialises in breakfasts.

“Usually, we open our shop at 6am and close by 5pm but now with the new opening hours we miss out on the bulk of our business.

“Usually by 8am, people are already at work and they don’t have time to get breakfast already,’’ she said.

“Now we are closed by 2pm due to lack of orders. We are lucky to still be able to operate and cover costs and salaries for our workers,’’ she said, adding that the kopitiam is also able to survive thanks to the discount from their landlord.

Apart from kopitiams, Klang is also known for good banana leaf meals, its wide variety of bak kut teh and quaint bakeries. 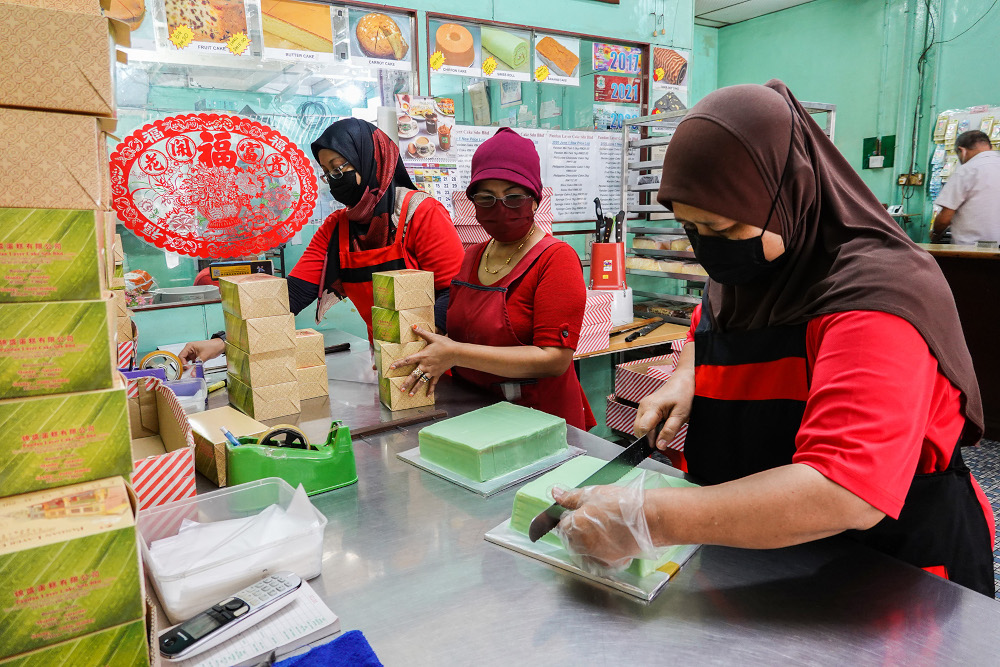 One such bakery is Pandan Layer, a family-owned business that has been in operation since 1977 and located some 500 metres from Chong Kok.

Its most iconic pastry, the pandan layer cake, is popular with visitors to the royal town.

During our visit, we saw bakery employees busy serving customers who had come in for sweet treats and pastries.

But owner Cheng Ching Chou, 52, said they are only covering operating costs despite the shop looking busy.

Cheng explained that even their regulars are now more cautious with how they spend their money.

The shop has suffered since the tourism sector came to a screeching halt in the past year.

“Usually, there will be busloads of tourists that would frequent the historical part of Klang and many of them would stop by Pandan Layer for the pastries here. Our pandan layer cake is also a major hit for out-of-towners.

“Right now, we are just surviving because of the local community here. Our regulars are keeping us alive and despite fewer orders coming in, we managed to cover costs,’’ he said.

Pandan Layer is one of five bakeries owned by the same family, all of which are Klang based.

While Pandan Layer, located in downtown Klang, was the original store selling the layer cake, the pastry is actually now made at the Meru Golden Bake bakery in Taman Meru. 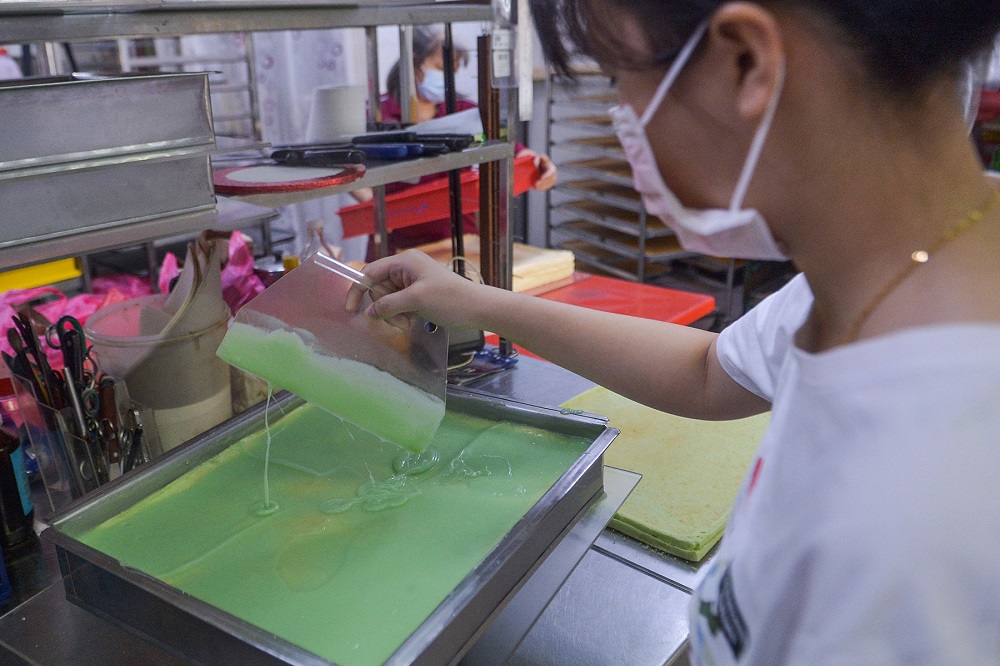 A Meru Golden Bake worker prepares their signature Pandan Layer cake to be distributed to several bakery shops owned by the other family members in Klang June 23, 2021.

Meru Golden Bake is run and operated by Cheng’s younger brother, Cheng Ching Kuo, who explained that while being a neighbourhood bakery, they mainly survive by supplying pastries, including the pandan layer cake to their other outlets.

“For the time being we are doing alright, manage to cover our costs and sales have been somewhat steady. But while regulars have been buying our products, I do sense that they are more careful in terms of their spending,’’ he said.