A health worker in protective suit tests a man for Covid-19 at a drive-through testing site at KPJ Damansara Specialist Hospital in Petaling Jaya March 28, 2020. — Picture by Yusof Mat Isa
Follow us on Instagram, subscribe to our Telegram channel and browser alerts for the latest news you need to know.
By SOO WERN JUN

KUALA LUMPUR, April 2 — The number of positive Covid-19 cases in Malaysia may have spiked in the last two weeks under the movement control order (MCO), but experts still view this amount as a sign of under-testing.

According to Malaysia Medical Gazette managing editor Dr Khoo Yoong Khean, the number of new cases per day actually hovers between 100 and 200.

“[Although] a few spikes [above this range were recorded] on average, it looks about the same on the graph.

“Actually, I would have expected more cases if there was an increase in testing. We will have to double check on testing numbers and compare against new cases to see if there is a concurrent rise,” said Dr Khoo.

At the moment, the country is expected to record a higher number of positive cases with increased testing, as well as a big cluster — stemming from the tabligh group (which is believed to have spread to the fourth and fifth generation), Dr Khoo added.

But, in general, Dr Khoo said most experts agree that Malaysia is still under-testing, when compared to South Korea, for example.

“If you would like to compare, don’t use the total number of tests, but tests per million population.

He, however, said Malaysians should only start worrying if the projection for hospital beds, ICUs and ventilator capacity cannot match the rise in cases.

“So, in a way, by testing more, we know the true picture of the outbreak and can prepare adequately,” he added.

Similarly, senior consultant paediatrician Datuk Dr Amar-Singh HSS said total test numbers compared against the Malaysian population is very small if juxtaposed with other countries such as South Korea or even Singapore.

“We don’t look at positives as indicators of our epidemic because MOH is not testing enough. 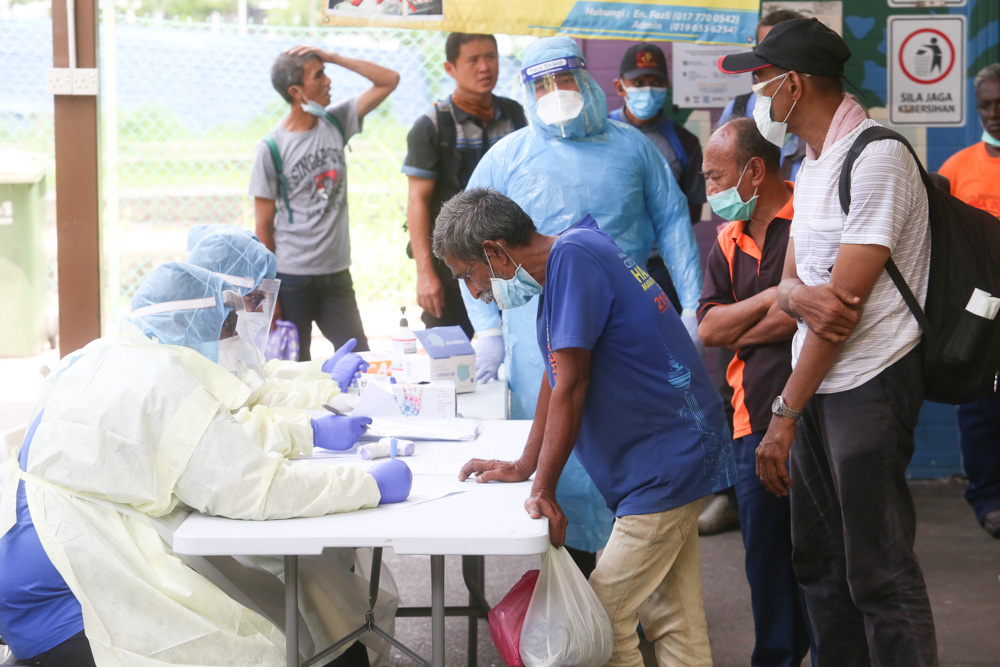 Health Ministry personnel screen the homeless for Covid-19 before sending them to transit centres during the MCO March 30, 2020. — Picture by Choo Choy May.

“Once you are not testing enough, you cannot look at test numbers to indicate your epidemic. You look at deaths,” Dr Amar said when contacted.

At the time of conversation with Dr Amar, Malaysia had 37 deaths.

“But you see, 3,700 cases based on the number of deaths is not today’s number; it is a number from four weeks ago, because if you get infected, it takes about 10 days or two weeks before you are presented with symptoms.

Malaysia’s current death toll is 43, and the total number of positive cases is 2,766.

He further elaborated that health-related non-governmental organisations (NGOs) are concerned because Malaysia is not testing enough.

“The groups have been pushing MOH to just test. They don’t seem to be listening to us,” he said.

Not everyone is tested

Dr Amar also claimed that not every individual from the tabligh group has been tested.

“They didn’t test every one of the tabligh individuals because MOH’s policy is that they are only testing symptomatic people.

“They are not testing people who have come into contact that are not symptomatic.

“Say, you have Covid-19 and you met 10 people. Only two have runny noses, they will test those, but the other eight they won’t test,” he added.

However, Dr Amar said there was no indication of the status of the remaining samples.

MOH also reportedly said that 5,084 from the tabligh cluster have yet to undergo screening. 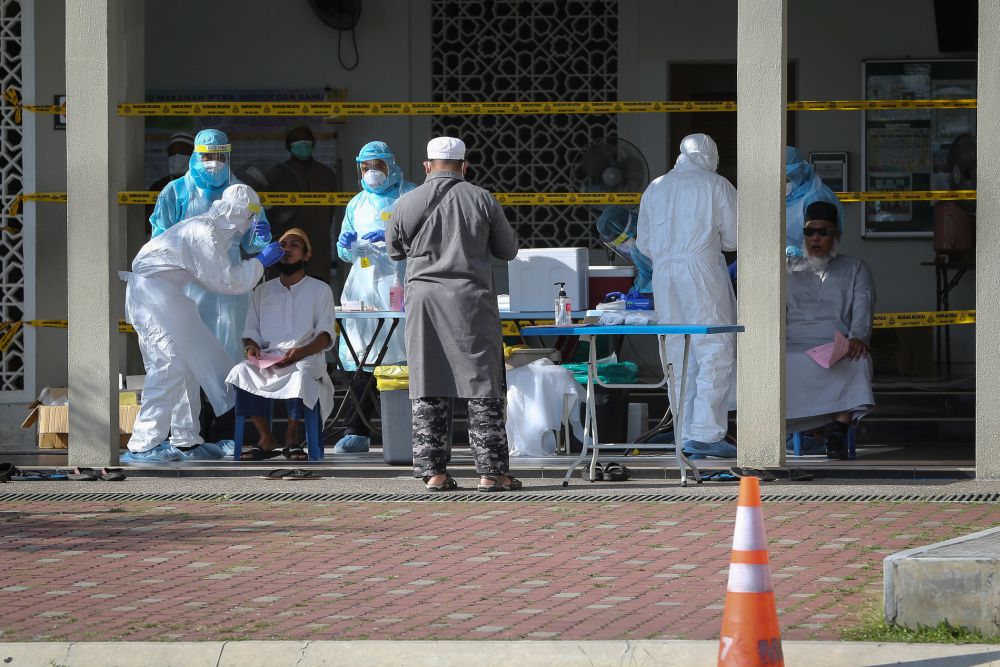 Health workers test members of the public for Covid-19 at the Section 7 Mosque in Shah Alam March 26, 2020. — Picture by Yusof Mat Isa

“Understand that saringan is not testing, but only screening.

“Those with no symptoms — those who have not been tested — they could be the spreaders. So we don’t know how many of them are spreading it.

“Are the tablighs sitting at home? Or went to the surau? We don’t know. Did they go and talk to their neighbours? We are in a mess,” he said.

“We need to ramp up our tests enormously,” he said.

Who needs to be tested?

Explaining how mass testing can be done, Dr Amar said it does not include society at large.

“Mass testing means we test everybody who has come into contact with a positive case. Now we’re only testing symptomatic individuals.

“We test all healthcare professionals who become ill because they are on the front line and they are very likely to be infected.

“Service providers — our delivery chaps, people who work on the front line and cashiers — these people are high-risk groups as they meet the mass community every day,” he said.

The other group that needs to undergo tests would be those in an area where a massive outbreak occurs, Dr Amar added.

On March 25, Prime Minister Tan Sri Muhyiddin Yassin said mass testing for Covid-19 would be done by MOH in high-risk areas to curb its spread in the country.

Muhyiddin reportedly said that MOH will therefore increase its capacity to conduct screening tests on a larger scale.

Dr Amar added that Malaysia needs all hands on deck if it wants to overcome Covid-19.

“Malaysians and all NGOs have to come together to work towards overcoming Covid-19.

“We are better than some of the countries that are currently fighting the virus; we just need to capitalise on it,” he said.

On the other hand, Dr Khor Swee Kheng, who is part of the newly formed Malaysian Health Coalition, said with more testing, the number of cases in Malaysia will definitely rise. 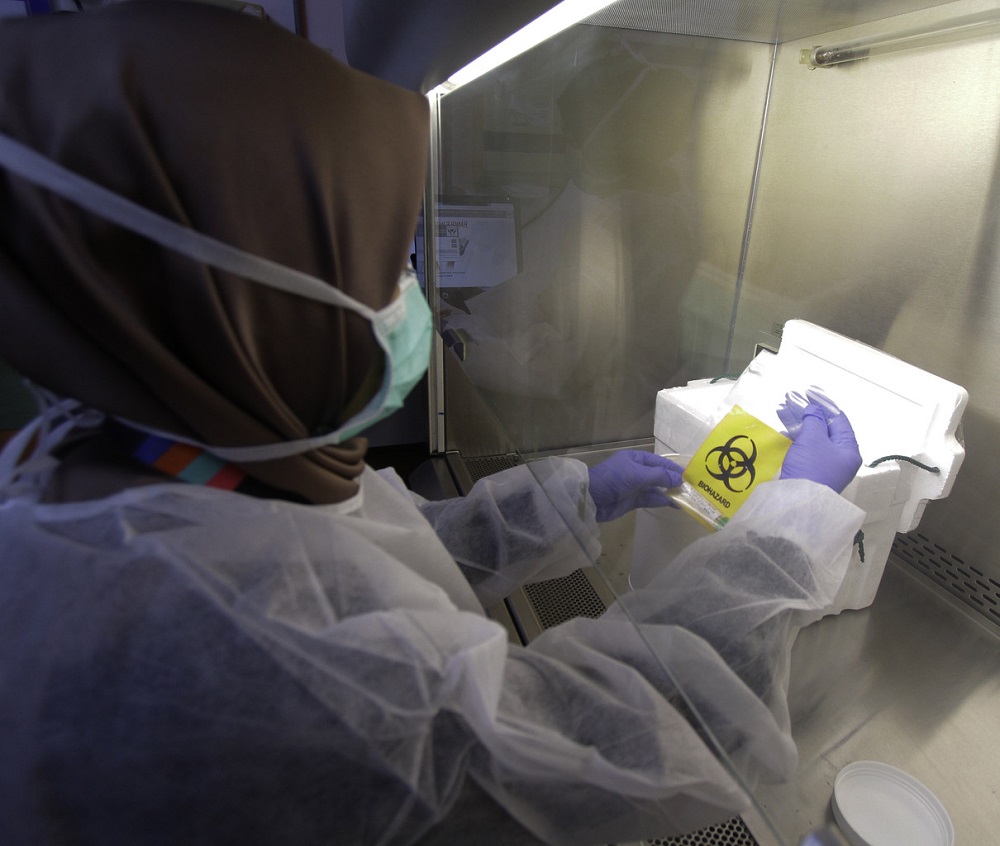 A lab technician processes a test sample during a screening process for the Covid-19 virus at the Institute for Medical Research in Kuala Lumpur February 26, 2020. — Bernama pic

“But rising numbers of cases can be both good and bad. Bad because we don’t want people to be sick. Good because mass testing will tell us who is sick so they can be treated or isolated so they don’t pose a risk to other people.

“Good also because we can track those who have been exposed to sick patients, so we can again reduce the risk to others. And finally, good because it means that scientists will better understand how the infection spreads, and that will help us manage the MCO better,” he said in reference to the movement control order that is currently in place across Malaysia.

Weighing in also on the possibilities of positive cases increasing, Malaysian Medical Association (MMA) president N. Ganabaskaran said testing for Covid-19 is currently focused on suspected cases and contacts of infected persons based on the criteria in MOH’s Covid-19 guidelines.

“The number of cases we see now per day may be due to the increase in screenings being done per day on Persons Under Investigation (PUI) as well as more participants and contacts from the Jamek Sri Petaling Mosque tabligh gathering who have come forward for testing.

“About 95 per cent of participants from the tabligh event have already come forward for testing, according to the IGP (inspector-general of police).

“About 62 per cent of Covid-19 positive cases are linked to the cluster from the event,” he said.

“It is of paramount importance that the public offer their full compliance to the MCO or there will be a further spread of infections, resulting in our nation’s healthcare system being overwhelmed,” said Ganabaskaran.

Why not do mass testing earlier?

According to Dr Khor, mass testing requires a lot of resources.

“Testing kits, lab capabilities, manpower to do the swabs. I think we were caught off-guard by the tabligh cluster, meaning we raced to track them and deploy tests.

“(We are) limited by general resources like manpower and labs.

“It is, however, very hard to match resources like South Korea, for example. They have large-scale drive-through testing. In the end, we can only work within our limits,” said Dr Khor.

Dr Khor also pointed out several reasons why Malaysia could not test everyone earlier.

“The main reason is that our domestic production of test kits is low, concentrated primarily in the Institute of Medical Research.

“Global production of test kits was also low in the initial stages of the disease, and any production in China, South Korea or Taiwan was understandably kept for domestic use, not for export to Malaysia.

“Also, about a month or so ago, the number of recorded cases in Malaysia was relatively low, which meant that mass testing wasn’t considered the first public health priority,” he added.

Is the MCO working?

Asked when Malaysia will see if the MCO is working, Dr Khoo said this is a little hard to determine at the moment because the number of positive cases is expected to rise from increased testing. Yet, at the same time, the country wants to see a decrease in positive cases as a result of the MCO that’s currently in effect.

“Information from contact tracing will help here, to see where the spread is coming from.

“If we continue to see sustained fourth to fifth generational spreading and beyond, this may mean that the MCO is not working,” he said.

Previously, Health director-general Datuk Dr Noor Hisham has said that the number of cases fluctuated during the first phase of the MCO but rose in general.

He also cautioned that the next two weeks of the MCO are critical in determining if Malaysia can effectively suppress Covid-19 infections.

On April 1, Malaysians entered their third week of restricted movement, which was extended from its original end-date of March 31 for another two weeks and is expected to come to an end on April 14.

Tabling of Budget 2023: As talks of Parliament dissolution heat up, PM says wait for tomorrow for answer